Readers may recall that three more RAAF UAS files appeared on the National Archives of Australia RecordSearch database in January 2016. Recently, I published details of one of these which the NAA had digitised at my request.

The NAA have now digitised the other two for me. 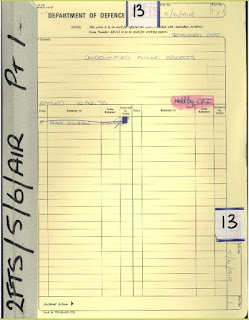 Perhaps the only interesting item on this short file is page four.  This is a "UAS Reporting procedure" indicating that "RAAF only interested if it affects security (country, establishments etc.)" Then it goes on to say "Take details (see UAS proforma on this file." Then, to refer callers to UFO Research WA or PUFORG. Then "Check time of sighting. If not one of our aircraft then we are even less interested." Then, "Be polite."

The following papers are a standard HQTC AOSI No 4/A/3 instruction which has been seen many times on previously available RAAF UAS files.

Finally, page 7 is a "Record of conversation" between a civilian Brian Sallor and an RAAF officer at Pearce on 30 July 1990, about three spherical objects seen at 2230hrs in the eastern sky, travelling south. They were orange/red lights. Duration 10 minutes. 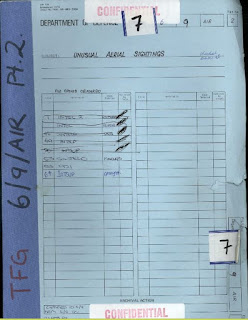 A document on this file reveals that another 107 pages are unavailable due to them being outside the date range of the Archives Act. The only way to obtain them is to submit an FOI request which would cost hundreds of dollars. If any blog reader would like to do this, then the community would thank them.

The file consists of about a dozen or so very low key sightings from members of the public. The RAAF simply recorded these on "Record of conversation" or memo forms and did no investigation of them.

There are two interesting documents on this file:

1. There is a copy of a telex from 75SQN dated 15 August 1990 to a number of addresses, including the Department of Defence's Joint Intelligence Organisation, in Canberra, about an unusual sighting.
In part it reads: 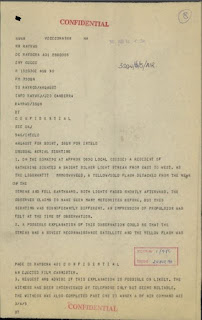 "1. On the 23 May 1990 at approx. 0650 local (2120Z) a resident of Katherine sighted a bright silver light streak from east to west. As the light manoeuvred, a yellow/gold flash detached from the rear of the streak and fell earthward. Both lights faded shortly afterward. The observer claims to have seen many meteorites before, but this sighting was significantly different. An impression of propulsion was felt at the time of observation.

2. A possible explanation of this observation could be that the streak was a Soviet reconnaissance satellite and the yellow flash was an ejected film canister.

3. Request and advise if this explanation is possible or likely. The witness has been interviewed by telephone only but seems reliable. The witness has also completed part one to annex A of Air Command ASI 3/4/5."

No other relevant papers are on this file. This is the first time, I have seen this sort of suggestion on a RAAF UAS file. The Joint Intelligence Organisation would be the natural place to refer such an observation as it is the Department of Defence's agency which analyses defence and foreign intelligence. 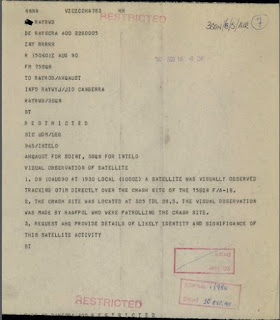 It reports that at 1930hrs local time on 10 August 1990 "...a satellite was visually observed transiting 071M directly over the crash site of the 75SQN F/A-18. The crash site was located at 305TDL 28.5. The visual observation was made by RAAFPOL who were patrolling the crash site. 3. Request and provide details of the likely identity and significance of the satellite activity."