One of the most well known physical trace case is the Delphos, Kansas, USA landing event of 2 Nov 1971.

A boy named Ronald Johnson, reported observing an object, initially on the ground, and then taking off into the sky. His parents also saw the object when it was in the sky. A glowing ring was seen on the ground. (Click here for full details.)

A sample of the soil was found to have a white filamentous substance in it, about which, researcher Jacques Valle, wrote,  in March 1974  "...that no one had taken the trouble to identify in the years elapsed since the landing." (Vallee. Forbidden Science Vol II, p.242. Click here.) Vallee had the sample analysed and reported the findings. "An analysis of the white matter in the glowing ring left after the sighting disclosed the presence of a Nocardia fungus that seemed to have been stimulated by an unknown radiation." (p.250.) This raises the possibility that the trace in this case was in fact of fungal origin. 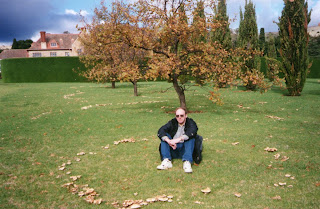 Based on my own investigation of a number of unusual ground traces within Australia, a number of these do indeed seem to be due to "fairy rings."A catalogue of Australian UAP cases I prepared (click here) has many examples, e.g. Ca. 1950, Bostobrick; 27 Jan 1969 Wasleys; Early June 1971 Tellebang.

The fungi are a large group of plants and are characterised by two important features. They are non-green plants devoid of chlorophyll and the plant body is characteristically composed of branching and thread-like structures termed hyphae. Fungi thrives in any environment that provides proper conditions for growth. They thrive in soil, in leaves, and in dead remains of plants and other organic materials such as foods and leather.

The ground markings they cause are found mainly in fields, paddocks, on reserves and lawns. The fruiting bodies of the gill and other fleshy fungi grow in lawns and paddocks, and can either produce single or circular colonies of mushrooms and toadstools. These rings of fruiting bodies are known as "fairy rings." Legend has it that if you step into such a rind you can hear fairies singing, and that they can abduct you and take you off to "fairyland." Sometimes, never to return. Even if you do return,, time as you know it will be different from that in fairyland. You might spend a week in fairyland, come back, only to find hundreds of years have gone by in your time. (For more on the folklore aspect click here and here.) 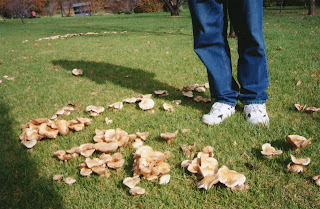 The perennial mycelium (the collective interlacing tangle) of the fungus begins growth in the centre of the ring to be, and then over time spreads outwards (causing the dead perimeter ring). Other mycelium in the inside of the ring die, when the organic matter in the soil has all been used up. After the soil regenerates due to water, fertilisers etc., you see a dead doughnut shaped band, with a more healthy greener centre and a healthy outside. Thus the ring increases in diameter, year after year, if the conditions are right. 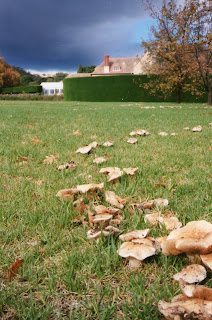 The diameter of such rings varies with age and growth rate. One Internet source (click here) cites a French 600m diameter ring. Based on average annual growth rates it has been estimated that some fairy rings are 600-700 years old (click here.)

This is the time of the year:

In South Australia, the month of May usually has the prefect conditions for "fairy rings" to be noticed.

The three photographs included with this blog post were taken by my wife and myself, at the property named "Carrick Hill" in suburban Adelaide in the month of May one year. There were literally dozens of rings and thousands of fungi on the surface. I have never seen anything like it before, or since.

So, if you get a call to come take a look at an unusual ring shaped trace in a paddock, reserve or lawn, then consider the possibility that it is a "fairy ring" with or without mushrooms/toadstools. Look out for:

* The presence of white threads in the soil

* The finding of mushrooms/toadstools in the mark

If in doubt, take a soil sample and photographs and head off to your local Department of Agriculture; Botanical Gardens or the CSIRO (in Australia) to have them analyse the material for you.
By Keith Basterfield at May 28, 2013