Office of the US Secretary of Defense FOIA AAWSAP response

On 30 April 2018, Australian researcher Paul Dean, published a blog titled "The Advanced Aerospace Weapons Systems Application Program."  Paul had received word from an individual, whom Paul referred to as "...someone who claimed to be in a senior defense program leadership role."

Having this inside knowledge, Paul immediately submitted a request under the US Freedom of Information Act (FOIA), to the Office of the Secretary of Defense/JS FOI Desk. He requested:

"...any electronic or hard copy records that include: mission statements, program overviews, program aims, fact sheets, program briefs for commanders or other senior leadership, program histories, contract information,  and other general information regarding a program (either still running or was running in the last 12 years) within the Department of Defense. The name of that program is "Advanced Aerospace Weapons Systems Application Program" (AAWSAP) or extremely similar. It was located possibly in the Defense Intelligence Agency (DIA), but I would like other DoD agencies checked. I saw a reference to this program in a register of DoD programs some years ago, so I do believe it exists or existed."

Almost two years later, the DoD responded in a letter dated April 14, 2020.  The letter came from the Department of Defense FOI Division, 1155 Pentagon, Washington DC. It was a "final response" to Paul's FOI request. Part of the reply, stated:

"The Office of the Under Secretary for Aquisition and Sustainment (USD A&S,) a component of the Office of the Secretary of Defense (OSD,) reasonably believes  their office does not have records in their files that are responsive to your request. Therefore a search was not conducted. You provided additional clarification of your request and a search of the Office of the Under Secretary for Intelligence (USD(I)) a component of OSD, conducted a search of their records systems based on the additional information you provided. After thorough searches of the electronic records and files of USD(I) no records of the kind you described could be identified. We believe that these search methods were appropriate and could reasonably be expected to provide the requested records if they existed." I image this letter below: 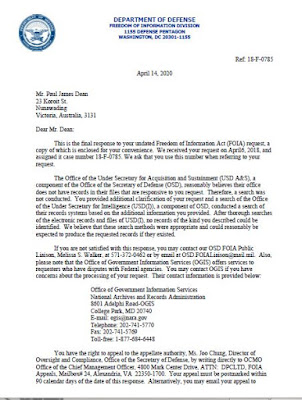 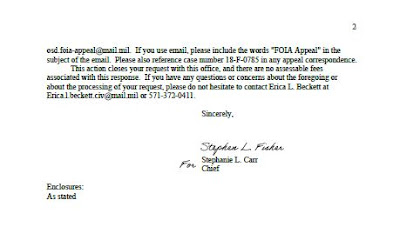 Note: Paul's current residential address is no longer the one shown above.

So, the very first known FOIA request concerning AAWSAP, to the Office of the Secretary of Defense/JS FOI Desk has essentially recorded a "no responsive records held" reply.  I am aware of other such FOIA requests, such as my own to the OSD/JS FOI Desk, which are in the pipeline. Paul's response gives us little hope of a positive reply.
By Keith Basterfield at April 15, 2020