An investigation by Marc Cecotti  and Keith Basterfield

Thanks to the great investigative work of Roger Glassel and Curt Collins, we learned recently of more details of Bigelow Aerospace Advanced Space Studies (BAASS) financial agreement with the Mutual UFO Network (MUFON.) This partnership allowed BAASS to acquire data, field reports, witness interview transcripts and case files from MUFON, but also to identify the most important UFO cases across the United States, and then dispatch their own field investigators. But in recent weeks, we learned that the BAASS effort to collect information and physical evidence went far beyond the US borders.

There have long been rumours that employees of Bigelow Aerospace Advanced Space Studies visited Brazil, during the time of the Advanced Aerospace Weapon System Applications Program (AAWSAP) contract. The two of us decided it was time to try and track down more definitive information about this alleged claim.

In the course of our investigation we communicated with a number of former BAASS employees. For the purpose of this article, we have decided not to provide their names, unless they are already in the public realm. This is in the hope that this will encourage other former BAASS employees to talk with us.

One of us conducted an online communication, in March 2020, with a former BAASS employee, whom for the purposes of this article we will call, the Investigator.

The individual had been a BAASS Investigator/Security Officer until July 2010, when there was a mass layoff of BAASS employees.

Their role was described as performing physical and information security, but also included investigating unusual activity at Skinwalker Ranch. They originally applied for a position at Bigelow Aerospace, then worked for BAASS from early 2009. They had a couple of deployments to Skinwalker Ranch.

During the online communication, the Investigator stated:

"I remember the first major investigation they did, they put a team together to go to, I believe it was Brazil, to investigate some UFO activities that was at least four or five years old. It took them three months to put the team together and actually get moving."

In discussing other former BAASS employees, and upon being shown a photograph of several BAASS employees, which we had located; the Investigator identified one woman in the photograph as being, an individual, whom we will refer to as, the BAASS Portuguese translator. The Investigator stated "I believe she was only there on a short contract, went with the team to Brazil." Asked when the trip to Brazil occurred, the investigator responded "Not sure, mid summer or fall 2009."

Asked if the team was a large one, or just a couple of people, the Investigator replied "About six I think." Questioned as to whether he remembered which BAASS employees were on the team, with two names suggested, being Kelleher and one other; the reply was "I don't think either."

We were able to find the announcement of a job offer for a BAASS Portuguese translator, on Twitter, dated May 30th 2009.

These details then sent us off searching for further confirmation of this BAASS trip to Brazil.

Later in March 2020, an online interview was conducted with another former BAASS employee, who was engaged as an analyst. A check of available information, stated that they were employed as a research analyst beginning in 2009.

They confirmed that they looked at data from the official French government UAP study group, GEIPAN; and said "We were in contact with a lot of French-speaking countries, and other countries from South America..." Once again, this confirms information obtained by other researchers that BAASS was trying to collect UFO reports and data from several American and foreign databases.

In late March 2020, one of us had a short conversation with a former BAASS Senior Investigator. This individual advised that they were, at one time, in charge of up to ten investigators, all BAASS employees. When asked if he was part of the trip to Brazil, he replied that he didn't go, because he had too many active investigations in the US at the time. Here then was a confirmation of the trip to Brazil.

This would be a good time to introduce some background information which has direct bearing on the subject of this article.

The June 8th 2010, New York Times carried an article by Kenneth Chang titled "In New Space Race, Enter the Entrepreneurs." It featured an interview with Robert Bigelow who said, in part:

In looking to clarify this statement, we came across a 2015 book titled "Bigelow Aerospace: Colonizing Space One Module at a Time," by author Erik Seedhouse. On page seven of the book there is the following quote: 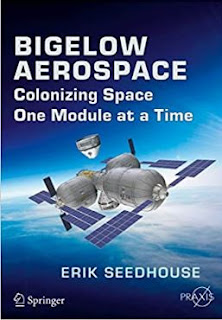 "Dr Franklin Ruehl, who claims Bigelow knows something the rest of us don't, quoting an interview with Bigelow from the New York Times in June 2010, in which Bigelow, when asked about UFOs, stated that "People have been killed. People have been hurt." When asked later about this quote, Bigelow claims he was referring to the Colares, Brazil incident from 1977, during which radiation beams fired by a UFO, injured or killed up to 35 people."

Note the timing of this comment. The Brazilian government released data on the 1977 incidents, in May 2009. BAASS sends a team to Brazil in mid summer or fall 2009. Bigelow comments in June 2010.

In December 2019, in response to a blog article by one of us, a communication was received from the Scientific Research of the UFO Phenomenon: Victoria UFO Museum, Entre Rios, Argentina. A Google translation of the message, rendered it as:

"I don't remember the year, but on behalf of BAASS was contacted our team [the name of the BAASS Portuguese translator]. She wanted that from Argentina, we would inform about objects falling from the sky, cases of UAPs and power plants, and nuclear power plants.

In return we were offered to train our researchers and finance the work. After that, she never communicated again and we received an email from BAASS that she no longer worked. I think it was in that year." The year referred to was 2009.

We were able to obtain a screenshot of our source's email account featuring the Portuguese Translator's BAASS contact information.

3. A talk at the Society for Scientific Exploration conference.

During his talk at the June 2018 SSE conference, Las Vegas, Hal Puthoff referred to Brazil when he said "We, as part of the program  looked at some cases that were really cool from Brazil." By program, he was referring to the Advanced Aerospace Threat Identification Program (AATIP.) He went on to say:

"In 1977, 78 was like Close Encounters of the Third Kind. A thousand pages of documents all done by the Brazilian Air Force investigation team, 500 photographs, 15 hours of motion film, a lot of medical injuries. This is a list of the different kinds of medical injuries that occurred when people encountered these craft at close range, and it has some overlap with cases that we've investigated during the program, of injuries occurring."

One of us reached out to Hal Puthoff by email and asked several short questions. Below are the questions, and Puthoff's responses:

Q1 Did a BAASS team go to Brazil?

A2 Gather data from Brazilian investigators (but I don't know details.)

Q3 Can you provide any additional information as to the Team's findings?

A3 No. I was never briefed on the medical program results, just knew that it had occurred. Colm Kelleher would be your best contact for this.

Q4 Were you part of the team?

We also reached out to Christopher (Kit) Green and posed a few questions. Here are those questions and Green's answers:

Q1 To your knowledge did a BAASS team go to Brazil?

Q3 Can you provide any additional information as to the team's findings?

A I did not hear about the trip at the time. Was not told about it until after - long after - as in well over 10 years after. I was told by a decent source no medical persons - certainly no MDs - were on the "team." I never saw a medical report. I have seen a non-professional, medical "stacked bar chart"of lay-terminolgy numbers of alleged cases - but not any underlying data. I have seen some summaries of cases over the years, widely published by Vallee and Pratt - but unrelated to BAASS. As I said in an earlier email, I never saw any medical data alleged from Brazil except from Vallee and Pratt - and there was no actual forensic medical data - but good, yet non-specific summaries."

We also checked with investigative reporter Tim McMillan as to his knowledge in this area. He kindly advised that:

"Now, I know BAASS investigators did travel to Brazil to investigate some more recent cases during AAWSAP. Where they went I'm not sure of yet. I was also told around 2010 some high-ranking officials from the Brazilian military were flown to Washington to brief AATIP personnel on some Brazilian UFO cases. Supposedly, these officials provided more documents and data to AATIP."

It begins to look, based on the comments by the former BAASS Investigator, and Tim McMillan, that the BAASS team was looking at some more recent Brazilian cases which occurred in the period 4-5 years before 2009, and not the 1977/78 incidents. Although, of course, they could have been undertaking both.

Recognising that some of our former BAASS sources may well be still under Non Disclosure Agreements (NDA,) we reasoned that UAP researchers in South America would not be held to an NDA, so our search then widened beyond the US.

On 1 April 2020, an online conversation with famed Brazilian researcher Ademar Gevaerd revealed further details. Gevaerd was able to tell is that he had actually met two members of BAASS in his home town of Curitiba, Brazil "They were former USAF agents working for Bigelow. They wanted artifacts from UFOs, such as metamaterials."

Asked if he remembered their names, he responded "Douglas Kurth for sure." On being sent a picture of Kurth he reconfirmed this identification. On the question of what year this was, Gevaerd, said "By 2008 or 2009, don't remember. As far as I know they didn't take anything." Gevaerd then mentioned "They also went to Argentina."

An online conversation was held, with a key UAP researcher in Argentina. This was the same person, who in December 2019 had responded to a blog post by one of us. Andrea confirmed the name of the BAASS Portuguese translator for us. Andrea also mentioned that the emails from the translator, and some from Colm Kellher, were the only contact she personally had with BAASS. She also told us that the translator could have reached out to a UAP organisation in Chile. We have been trying to contact the former BAASS translator, who still lives in Las Vegas, for comment.

Online communication with a key UAP researcher in Chile, revealed that he was 100% sure, that BAASS did not reach out to his organization in 2009. He believes that because of past disagreements between his organization and Bigelow's now defunct paranormal research institute, the National Institute for Discovery Science (NIDS,) BAASS chose not to contact him. We are still investigating possible contacts in Chile.

Our Chilean contact mentioned that it was possible that BAASS had reached out to someone in Uruguay. A follow up with that individual in Uruguay failed to confirm that they had been contacted by BAASS. However, statements from some of our sources led us to believe that contact with BAASS may actually have happened. We are currently investigating those claims.

At the time of posting this article we are still looking into the cooperation BAASS tried to establish with several organizations in South America, but also with other countries worldwide, to collect not only information, but also physical evidence.But as Collins and Glassel reported, evidence seems to suggest that BAASS was more interested in collecting data and reports, than sharing its own findings.
By Keith Basterfield at April 07, 2020