How BAASS went about collecting UFO reports from across the globe

In previous articles, we have demonstrated that Bigelow Aerospace Advanced Space Studies (BAASS) was collecting UFO sighting reports from Brazil. It is general knowledge, that BAASS was also very much active, in collecting and investigating UFO sightings in the USA. They also sought details of sightings in other countries. We thought it might be useful to bring together in one article, what has been collectively established.

Through using LinkedIn profiles and other social media, we are aware of at least ten individuals who say they were either investigators, or senior investigators for BAASS. The first was employed in November 2008; eight hired in 2009 and one in 2010. By June 2010 when mass layoffs occurred, only three of them were left. The last left in May 2012.

We know that between the above dates, MUFON was running its STAR team. Between April 2009 and January 2010, MUFON sent at least 71 reports collected from within the USA, to BAASS.

A meeting between two BAASS investigators, one of them being Douglas Kurth, and Brazilian researcher Ademar José Gevaerd took place in Curitaba, but Gevaerd couldn’t remember the exact date. Gevaerd explained “We spoke about a contract of services. I would search and investigate old and new cases in order to find metamaterials.” BAASS possibly met with other groups, but we have no definitive evidence of this.

Marc Cecotti located an item on a UK UFO forum, featuring details of a sighting of a glowing round orange ball, reported in the UK, on 13 June 2009. Another witness posted details of her similar sighting. A BAASS investigator, Paul Jantzen, sought further details in a forum post, dated 16 June 2009. 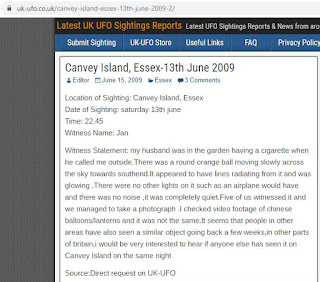 “Jan and Ruth, I am very interested in speaking with both of you further regarding your report. Please contact me at your earliest convenience. Thank you.

I am in the USA and for the interim email may be the easiest way: investigators@baass.org

Thank you I look forward to speak with you both.”

Canadian researcher Brian Vike operated the HBCC UFO Research website up until June 2009. At that point he sold his five Internet domain names to Bigelow Aerospace. The current website has the following:

“HBCC UFO.org Research was Founded in 2002 by Brian Vike “and we, the new management (BAASS) are…ready to receive new cases.”

Andrea Simondini from Visión OVNI, a UFO research group from Argentina, was contacted by Melissa Godoy from BAASS.:

“The one message we received was for presentation first, that is, it was Bigelow, and what they did. They asked us about a particular case that we had investigated in the province of Salta, the “Anta Case.” After that, when I explained to them about the case and our team and investigations, they sent us another email, it was always Melissa Godoy, who offered us to train  our investigators, finance investigations, analyses and research instruments.”

“Christopher Rutkowski who conducts the Canadian UFO survey, says Bigelow approached him at a MUFON conference in 2009. ‘He asked me to help him in his UFO related efforts by alerting him and his team to any ‘good’ Canadian cases that needed onsite investigations,’ he says. One of Bigelow’s people checked in with Rutkowski every few months following.”

Our understanding is that no such cases were ever passed on to BAASS, due to the fact that no high profile cases occurred during this time period.

See the 6 July 2020 update below, for some relevant emails.

There was a second possible trip to Brazil. The same team of four BAASS investigators went back to Fortaleza to document photographic and video evidence, of UFO sightings from CPU-CE records.

An 11 February 2010 directive from the Federal Aviation Authority (FAA) stated:

Colm Kelleher of BAASS communicated by email with Australian researcher Bill Chalker about sightings in Australia and China. Ultimately though, as far as we are aware, BAASS failed to secure either Australian or Chinese reports, in this way. 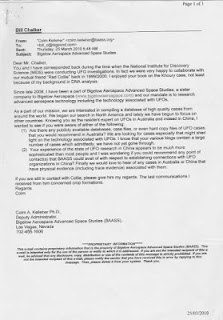 Do we have any idea of the volume of reports which the BAASS hotline was receiving? In an article titled "Robert Bigelow's and MUFON's Hybrid UO Investigation Venture 'under review' in 2010," Alfred Lambremont Webre writes:

"Reached by this reporter at his office in Las Vegas, Dr. Colm Kelleher, BAASS's Deputy Administrator confirmed that BAASS has an office established to receive UFO reports. He stated that the monthly volume of UFO reports received by BAASS is 'infrequent.'"

“Hello Jeff,
I have been wanting to drop you a line, but have been really busy lately.
First, Lt Jon Dover and I were trying to contact you back on the week of July 12th. We were working with personnel from Bigelow Aerospace (from Las Vegas) investigating the Satan's Butte sight. We escorted their personnel out to the Butte, so they could conduct various readings and tests. We attempted to contact you several times as they were very interested in meeting you and possibly conducting an interview with you while they were here, but that didn’t work out.

If you want more information on Bigelow Aerospace you can go to their website at bigelowaerospace.org The person I am working with is Loran Huffman, senior investigator, Bigelow Aerospace Advanced Space Studies, his number is …”

The Satan’s Bluff sightings occurred initially on 7 June 2010 at 2145 hours, and involved a cylinder with red blinking lights descending into the Butte. Two days later there were other sightings.
Loran Huffman’s LinkedIn profile states he was the “Director of Investigations and Security.”

We know of no-one who can advise us of the number of FAA generated reports which went to BAASS.

BAASS investigator Gary Hernandez was still inquiring about sightings over the Lake Erie area. He had first inquired in April 2010 about these. Interestingly, in his LinkedIn profile, Hernandez states that he worked for BAASS between January 2009 and February 2010. Why then he was still investigating reports as late as August 2010, remains to be seen.

We welcome hearing of any other BAASS investigated sightings, no matter where in the world they occurred.

Acknowledgement: Thank you to US researcher Curt Collins for his assistance.

Nick Pope, formerly of the Ministry of Defence in the United Kingdom, after reading our blog, made the following comment:

"Mention of a UK case suggests it would be helpful and timely to confirm that I had some discussions with BAASS personnel about the UK situation. This was mainly in 2009 and my two main contacts were Colm Kelleher on policy and Paul Jantzen on a few specific cases. A lot of the discussions centered on the MOD's UFO files, which we'd started to declassify and release in May 2008 (see link below). While I signed no NDA and never had any formal association with BAASS, I'm not going to be releasing any of the various email exchanges I had with BAASS personnel about this, but can confirm that while I offered an insider's perspective on the MOD material all discussions were at an unclassified level."

I will try and get ahold of you by phone (although I will be out of pocket the next few days).  In the interim, I greatly appreciate your thorough response.

I am not sure what you know about BAASS, but we are a private aerospace company researching future space technologies.  As such, we believe we can gain a lot of insight via a more detailed understanding of the UFO phenomena.  Therefore, we feel it would be mutually beneficial to continue an ongoing dialogue.

Specifically, we have significant resources for investigating select cases around the world.  We have a staff of experienced investigators, scientists, engineers, and researchers.  If you are willing to inform us of current/future High Quality Unknown Canadian cases as they are reported, we may be willing to use our resources to conduct thorough, timely investigations.  And we would share any lab analyses that would be produced from these investigations.

As you know, we have an ongoing reporting and investigation agreement with MUFON.  I envision the scale of our dialogue would be significantly less, as we would request that you advise us of only the highest quality cases – those that contain some sort of physical evidence, including trace evidence.  We could join forces with some local investigators or conduct the investigations autonomously, however you desire.  But we do have the fiscal resources to have evidence analyzed by multiple, independent laboratories.

We understand that these cases are rare.  One cannot force the phenomena to respond to any constructed timeline.  If this is agreeable to you, we will always be willing to listen to any recommended cases that you feel are worthy of thoroughly investigating.

Thank you for your time and efforts.  I look forward to working with you in the future.

Date: Wed, 19 Aug 2009 16:42:21 -0700From: Douglas Kurth <douglas.kurth@baass.org>To: rutkows@cc.umanitoba.ca, chris_rutkowski@umanitoba.ca,     rutkows@cc.umanitoba.caSubject: FW: BAASS - Request to Contact youMr. Rutkowski,I am a Program Manager at BAASS and was requested to contact you by Dr. ColmKelleher.  You met him, along with Mr. Bigelow at the recent MUFONSymposium.Apparently you had discussed your collection of UFO files/documents withColm.  He stated that you said you have acquired over 8,000 pages ofdocuments on Canadian UFO cases.We are currently conducting our own research/analysis of the "Canadianreleased information" (the documents accessible via the internet).  As youcan imagine, this is a very lengthy process as we started from scratch.  Wehave your recent statistical report on the past 20 years of UFO Reports inCanada.  Additionally, we will have a copy of your co-authored book TheCanadian UFO Report very soon.Our specific questions include how much information do you have that has notbeen previously published?  And how much of that information is "useful"information?  Is the vast majority of your files covering investigatedcases, or mostly just sighting reports?I would enjoy discussing and learning about the information you have.  Ifyou are available, please feel free to contact me via e-mail(douglas.kurth@baass.org) or telephone (1-702-798-0444, ask receptionist tospeak with Doug).Thank you for your time.  Very Sincerely,Douglas KurthProgram ManagerBigelow Aerospace Advanced Space Studies*****CONFIDENTIAL INFORMATION******This e-mail contains confidential and/or proprietary information that is theproperty of Bigelow Aerospace Advanced Space Studies.  This e-mail isintended only for the use of the person or entity to which it is addressed.If you are not the intended recipient of this e-mail, be advised that anydisclosure, copy, distribution or use of the contents of this message isstrictly prohibited.  If you are not the intended recipient of this e-mail,please notify the sender that you have received this in error by replying tothis message.  Then, please delete it from your system.  Thank you.