BAASS in Brazil - emails and more

In our last article about BAASS and Brazil, we revealed that a team of four investigators came to Fortaleza and Sobral, in the Ceará region, to meet local UFO research groups; collect information, and records.

Since that last article, Jãnder Tôrres, a member of CSPU in Sobral, Ceará reached out to Marc Cecotti. His testimony and the evidence he supplied give us a valuable insight, about the objectives and interest, of BAASS in Brazil and South America.

A meeting in Sobral, Ceará, Brazil

Asked how BAASS reached out to CSPU, a member of the group previously told us: “A friend received a call from these people and they just asked to attend one of our monthly meetings and they wanted to know if we already had any information about the UFO propulsion system.”

Shortly before our last article was published, Jãnder Tôrres contacted Marc Cecotti to offer additional information. Tôrres is a 45-year old college professor and researcher with a PhD in Public Health. He has always been interested in the UFO phenomenon, and mysteries, and has been a member of CSPU for more than 20 years.

He recalls that the group had been informed that a team of Americans were coming to Sobral to attend the CSPU monthly meeting. The team was composed of Melissa Godoy, Loran Huffman, Lucas Gornichec and Timothy Koonce. They introduced themselves as member of Bigelow Aerospace Advanced Space Systems. Huffman said he was a former Federal Agent. 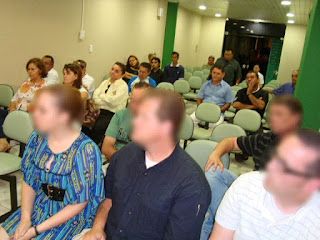 After the meeting, a short video interview was recorded. Then, CSPU and BAASS went to a local restaurant for dinner. They didn’t say anything about their next destination.

In the following months, an online correspondence started between Jãnder Tôrres and Melissa Godoy. His recollection is that a total of 4 or 5 emails were exchanged over a couple of months. Each email is shown as two images, which means there is some duplication in words shown. 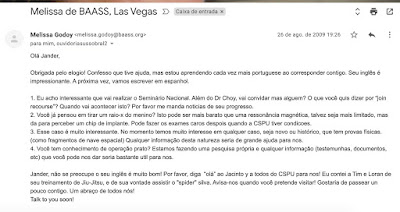 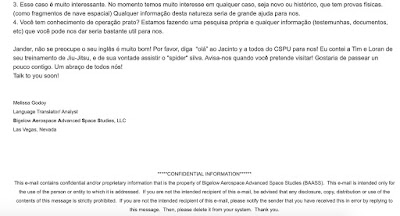 Thanks for the compliment! I confess I had help, but I am learning more and more Portuguese by corresponding with you. Your English is impressive. Next time, we'll write in Spanish.

1. I think it's interesting that you're holding the National Seminar. Besides Dr Choy, you're going to invite but someone? What did you mean by "join recourse"? When will this happen? Please send me news of your progress.

2. Have you thought about taking an x-ray of the boy? This might be cheaper than an MRI, maybe more limited, but it's enough to figure out an implant chip. You can do the expensive tests after the CSPU has conditions.

3. That's a very interesting case. Right now we're very interested in any case, new or historic, that has physical evidence. (like spacecraft fragments) Any information of this nature would be of great help to us.

4. Do you have any knowledge of Operation Prato? We are doing our own research and any information (witnesses, documents, etc.) that you can give us would be very useful for us.

Jander, don't worry your English is very good! Please say hello to Jacinto and everyone at the CSPU for us! I told Tim and Loran about your Jiu-Jitsu training, and your desire to watch "spider" silva. Let us know when you intend to visit! I'd like to take a little walk with you. A hug from all of us!
Talk to you soon!”

Then, another email. Jãnder’s replies to the initial mail are in red, and new comments by Godoy in black. There is some confusion in numbering in the original email. 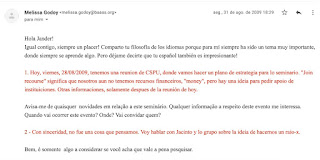 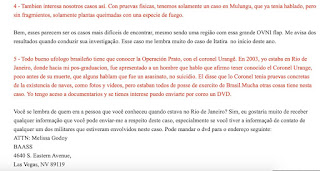 Same with you, always a pleasure! I share your philosophy of languages because for me it has always been a very important subject, where you always learn something. But let me tell you that your Spanish is also impressive!

1. Today, Friday, 28/08/2009, we have a CSPU meeting, where we are going to make a strategy plan for the seminar. "Join recourse" means that we still do not have financial resources, "money", but there is an idea to ask for support from institutions. Other information, only after today's meeting.

Please let me know if there are any new developments in relation to this seminar. Any information about this event interests me. When will this event take place? Where? Who will be invited?

2. In all honesty, it wasn't something we thought. I'm going to talk to Jacinto and the group about the idea of making an X-Ray.

Well, there's only one thing to consider if you're afraid to look into it.

4. We are also interested in cases like this. With physical evidence, we have only one case in Mulungu, which I had already spoken about, but without any fragility, only plants that were burned.

Well, these seem to be the most difficult cases to find, even if it is a region with that big UFO flap. Let me know the results when you conduct your investigation. This case gives me a lot of information about the case of Itatira at the beginning of this year.

5. Every good Brazilian ufologist has to know about Operation Prato, with Colonel Urangê. In 2003, I was in Rio de Janeiro, where I was doing my post-graduation, and was introduced to a man who spoke that I claim to have known Colonel Urange, shortly before his death, who some say was a murderer, not a suicide. He said that the Colonel had concrete evidence of the existence of ships, such as photos and videos, but they were all from the Brazilian army. A lot of other things this case has. I have access to documents and if you are interested I can send you a DVD.

How do you know who the people were in Rio de Janeiro? Yes, I would very much like to receive any information you can send me about this case, especially if you have the contact information of any of the military who were involved in this case. You can send the dvd to the following address:
ATTN : Melissa Godoy
BAASS
4640 S. Eastern Avenue
Las Vegas, NV 89119.

Messages to Argentina and Australia

In December 2019, Andrea Simondini from Vision OVNI, a UFO research group based in Victoria, Argentina, had reached out to Keith Basterfield to offer new information. "I don't remember the year, but on behalf of BAASS we contacted our team, Mrs Melissa Godoy. She wanted that from Argentina, we would inform about objects falling from the sky, cases of UAPs and power plants and nuclear power plants.

In return we were offered to train our researchers and finance the work. After that, he never communicated again and we received an email from BAASS that she now longer worked. I think it was in that year."

Marc Cecotti contacted Andrea Simondini a few weeks ago regarding this email. Andrea explained “[…] The one [email] we received was for presentation first, that is, it was Bigelow and what they did.  They asked us about a particular case that we had investigated in the province of Salta, the "Anta Case".  After that, when I explained to them about the case and our team and investigations, they sent us another email, it was always Melisa Godoy, who offered us to train our investigators, finance investigations, analyzes and research instruments.”

Australian researcher Bill Chalker recently posted a blog about the email he received from BAASS’s Colm Kelleher in March 2010. Kelleher was requesting information about UFO research in Australia, especially access to public databases and copies of case files. He also mentioned “Finally we would love to hear of any cases in Australia or China that have physical evidence (including trace evidence) associated with them.”

The tale of the 38 DIRDs

Thanks to the great work of many researchers, BAASS interest in UFOs is now indisputable. It is obvious that this organization, sponsored by the DIA, was after any kind of information it could obtain. The MUFON-BAASS contract was only a part of a much wider effort to find witnesses and documents, but also physical evidence like “spacecraft fragments” or even “implants”. In some cases, financial support and training were offered to UFO research groups. Despite an official statement by the DIA that “all products produced under the AATIP contract” were the 38 Defense Intelligence Reference Documents, our recent investigation proves with undeniable evidence that the sole contractor for the 22-million dollars AAWSAP/AATIP program was definitely doing more than subcontracting technical reports. We will provide additional evidence in our next article.