The Advanced Theoretical Physics Project - documents from their first meeting

Following the recent public release of three documents from the files of the late Dr. Edgar Mitchell, Australian James Rigney, made an appeal in my last blog post, for anyone with further related documents to come forward and place them in the public domain.

At around the same time, I was listening to US researcher, Melinda Leslie, on The UFO Network News show, with co-hosts Frank Stalter and Chant Hannah.  Chant had arranged for Melinda to mention her extensive research on the topic of a number of individuals who repeatedly crop up in the history of our subject, from the 1980's to the present day, and provided some relevant documents.

Melinda referenced a website which carried a video of a presentation she had given on that topic. I watched the video presentation, and afterwards contacted Melinda to follow up on a particular aspect; namely her use of images from some original documents related to the Advanced Theoretical Physics (ATP) project, run by John B Alexander in the 1980's.

Several years ago, two pieces of documentation made their way into the public domain. I image these documents below: 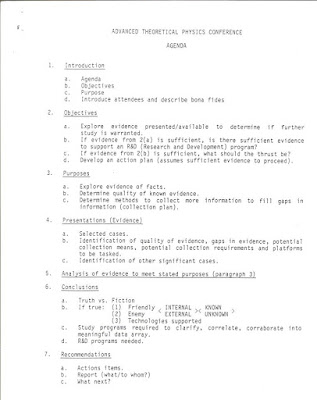 The top document is the agenda for the meeting; and the bottom one, a booking "slip" for the "BDM McLean Secure Facility" for the dates of 20-25 May 1985.

During her video presentation, Melinda mentioned that she had obtained her copies of ATP documents, from an individual named Jack Houck.


Who was Jack Houck?

I turned to my invaluable copy of "Forbidden Science: Volume Three" by Jacques Vallee. There I found the following entries about Houck.

"I heard it from Jack Houck, an engineer at McDonnell in Huntington Beach. He is a student of a friend of mine, a medium in L.A. He keeps bringing her some CIA types who give her coordinates and ask her what she sees...Jack Houck also believes there's a giant UFO base in Brazilian jungles."

"News about Jack Houck: he will not be involved in UFO research with the government group after all, restricting his activities to PK. He tells me this results from official reactions when it became obvious that news of the Secret Onion's existence had somehow leaked to his New Age friends..." ["Secret Onion" was Vallee's name for the ATP - KB.]

"Hal tells me that the Secret Onion project is dead. After all those high level meetings, someone who was higher threw a monkey wrench into the gears. I believe they became visible prematurely. The ludicrous episode with Jack Houck has demonstrated that they were incapable of maintaining confidentiality."


New to me images

In my communications with Melinda, she not only provided me with a copy of the "Agenda" document, but multiple additional documents. Melinda described the other documents as copies of overhead transparencies used during the May 1985 ATP conference. I had not seen these additional documents before. Melinda has kindly allowed me to share these. The comments below each image, are solely mine.

Where did Melinda obtain these documents?

After viewing these additional images, I went back and re-watched her video presentation. At a 1994 MUFON Los Angeles event, Melinda had met Ed Dames. During a conversation between Melinda and Dames, Dames told her all about the ATP, and suggested she talk to Jack Houck about the ATP. Melinda responded that she was taking remote viewing classes from Houck. Melinda became friends with Jack and Jean Houck. After Jack Houck's death, in 2013, Jean Houck spoke to Melinda and Melinda's friend named Steve. Jean Houck invited Melinda and Steve to go through her husband's file boxes. This is where Melinda found the ATP documents. So, this is the source of the 1985 ATP documents I am discussing in this blog post.

The ATP documents sourced from Houck via Melinda 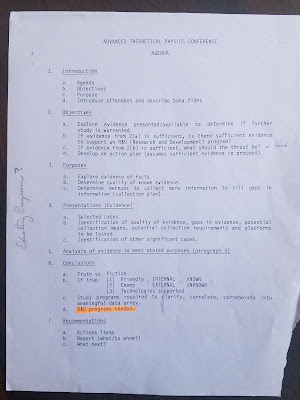 [Note: any highlighting shown, was done by Melinda -KB.] 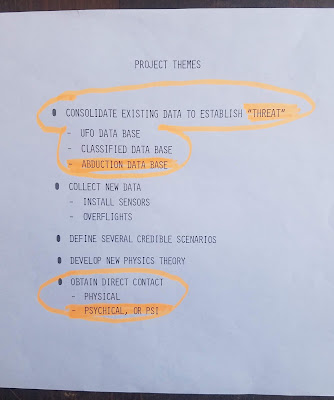 1. Note the highlighted word "Threat." Moving forward to the year 2017 when we learned of the existence of the Advanced Aerospace Threat Identification Program (AATIP.) Perhaps, this is not too unexpected, for after all both the ATP and AATIP were set in the US Defense Department.

2. There are three data bases mentioned. Were these actual established data bases, or do they perhaps refer to subsets of data? Note the reference to "Abduction data base." In 1985, there was the beginning of great interest in  the abduction phenomenon.

3. Under "Collect new data" there are "Install sensors" and "Overflights."

4. On "Obtain direct contact" there is "physical" and "psychical or PSI." 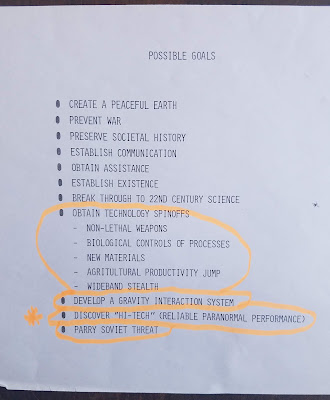 1. Again, on this list we see the Defense oriented "Parry Soviet threat."

2. The area with most sub-points, is the "Obtain technology spinoffs." 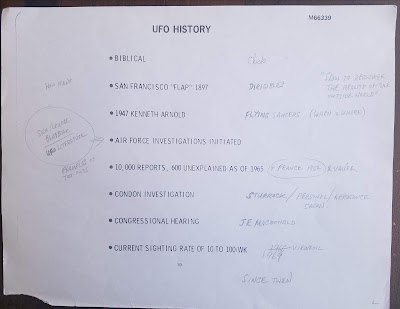 1. A review of the history of the subject would be a must , as no doubt looking at the composition of the ATP membership, there were individual differences in knowledge bases.

2. Vallee, Sturrock, McDonald and Sagan are named in the hand written notes. 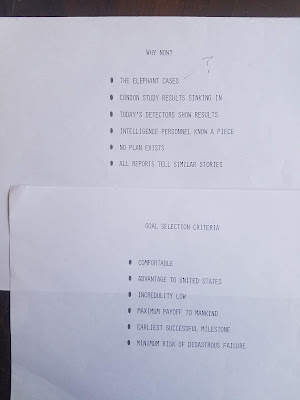 1. Two pages in one image here.

2. Top image: I would think that the reference to "The Elephant cases" refers either to UFO cases which no one likes to talk about; or the old story of a number of individuals who touch different parts of an elephant, but none of them has the entire picture, and so they don't know its an elephant.

3. Bottom image: In selecting goals for the project, a number of points set out here need to be noted. 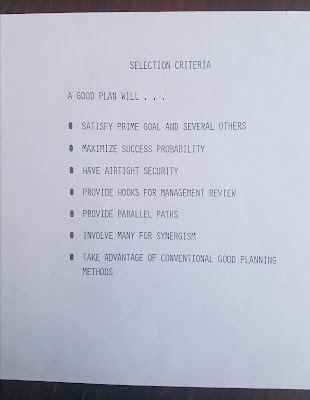 A good plan will "Have airtight security." Well, as we saw above, the existence of the project was  "outed" at a very early stage. 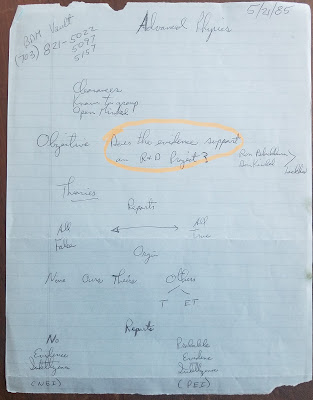 2. There is mention of individuals, Ron Blackburn and Don Kimbel of Lockheed. 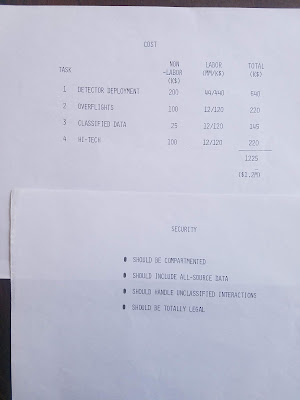 2. Bottom image: "Plan a media release now if cover is blown later." Unfortunately, their cover was blown almost straight away. 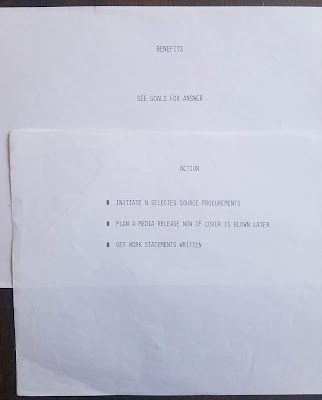 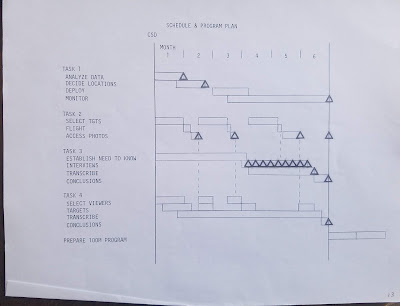 1. From a previous slide, task one is "detector deployment" where they were looking at deploying detectors within 3-4 months. The question arises as to what type of detectors they were talking about.

2. Task one was "Overflights." Targets to be selected, flights arranged, and photographs accessed. But what "overflights" and where we they to be conducted?

3. Under task four which is "classified data" here we see a little detail. Apparently the plan was to select certain individuals and interview them. Presumably for their knowledge of the UFO phenomenon.

4. Task four was "Hi-tech." This seems to refer to "remote viewing," as an approach, as it states "Select viewers" and "targets."

5. Note the bottom line which says "Prepare 100M program." Is this a reference that after the initial trial period, they were looking to institute a M$100 project? 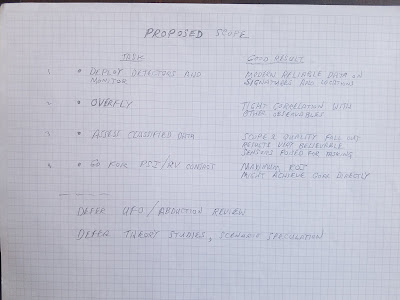 1. A good result of "overflight" would be "Tight correlation with other observables." Again I ask, aircraft overflights of where and what?

2. "Assess classified data." Perhaps my earlier thought that they wished to interview people in positions of knowledge, is incorrect. Instead, this leads me to believe they were talking bout accessing individuals in the Defense realm with access to classified sensor systems. Then to ask them to have the sensors available if there were orders given to task them to observe the UFO phenomenon?

3. It seems that someone in the group with knowledge of remote viewing, thought that here, a good result would be maximum return on investment (ROI.) 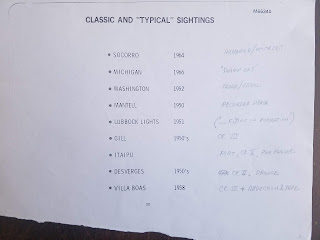 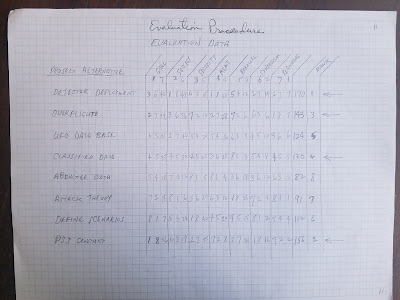 This exercise in ranking the top tasks, resulted in the selection of detector deployment; overflights; classified data and PSI contact which are then featured elsewhere in the presentation images. 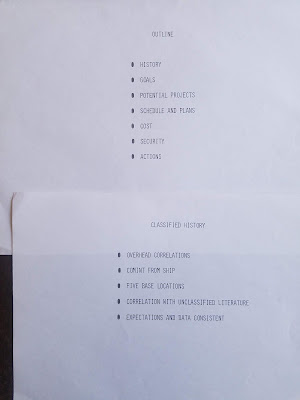 2. "Five base locations." My thought here, is that there have been suggestions that the UFO phenomenon has "bases" on Earth. If so, this would explain why one of the four selected tasks was "overflights." Surveillance photographic flights to see if anything turned up? Note a comment from Vallee's book, cited earlier in this blog post that "Jack Houck also believes there's a giant UFO base in Brazilian jungles."

A fascinating insight into the ATP conference of May 1985, as shown in copies of the original presentation material from that event.

I wish to again thank Melinda Leslie, and her colleague Randy Koppang, for all their research; and particularly Melinda for sharing the images with me.

Melinda Leslie pointed out to me, that John B Alexander had written an Obituary for Jack Houck. This appeared in the Journal of the Society for Scientific Exploration, 2013, volume 27, number 2, pages 323-324.

Houck worked as an aeronautical engineer with Douglas Aircraft Company which then became McDonnell-Douglas and then Boeing, between 1961-2003.

"He managed a number of extremely sensitive defense and intelligence programs...During that period he formed the Advanced research Group that engaged in evaluating data of foreign rockets and associated weapons systems...

"...in 1980 James McDonnell, then chair of McDonnell-Douglas, asked him to run a remote viewing experiment. In response Jack conducted fully judged, double-blind experiments using latitude and longitude coordinates for targets all over the world...

"...he worked with established material scientists to conduct analysis and documentation of microscopic changes that occur to the material during the PKMB...

"...The work performed by Jack in development of theory, experimentation, and analysis covering a wide range of extraordinary observations was exemplary..."

"Five base locations" most likely refers to the alleged UFO bases Pat Price remote viewed and showed to Hal Puthoff in 1973, (in addition to Jack Houck's one in Brazil). I'm sure you know the story - it's well documented in Richard Dolan's "UFOs and the National Security State Volume 2" on page 68. Price told Puthoff that there were four major UFO bases on the planet. There were supposedly located at Mt. Perdido in the Pyrenees Mountains, Mount Inyangani in Zimbabwe, Mount Hayes in Alaska, and Mount Ziel in Australia. Interestingly, in a lecture in the early 2000s Puthoff stated that someone from Australia was called who confirmed that the location Price found was a hot spot for UFO sightings. Puthoff begins the story at 3:31 in this video https://youtu.be/LPYFMkxw830?list=PL9101FF5CCA48AE61&t=211 I'd be interested to hear what you think about UFOs supposedly being frequently sighted near Mount Ziel, Keith. Thanks for the post."

I watched the video presentation, which was part 7 of a talk Hal Puthoff gave at The Arlington Institute, on 1 February 2012. In part, Puthoff stated:

"Pat Price volunteered that he'd found several UFO bases on the planet, and one of them was in Australia. So, somebody in the Agency, called the station chief without telling him why he was asking. He said, can you tell me what's going on over there in the Mount whatever, I forget what it was now, area. And the guy said you mean where all the UFOs coming down."

The reference in Dolan's book includes the following text; speaking of Pat Price:

"He told Puthoff that there were four major underground alien bases, each within a different mountain range...The main purpose of the bases he stated, were to 'reinforce B.T.L. implants, transport of new recruits and overall maintenance function'...

"...The inhabitants of the bases looked like normal human beings, said Price, although the heart, lungs, blood and eyes were different. The four sites were protected from discovery and had very advanced technology. Price also said the inhabitants of these bases used 'thought transfer for mental control of us.'

"...The fourth site was at Mount Ziel, in Australia's Northern Territory. This base had the most personnel, including many from the other three sites, 'like a rest and recreation area.' While viewing this location, Price thought he was detected, so he 'left' and then returned. he noted the base was also the 'homo sapiens introduction point.'"
By Keith Basterfield at June 24, 2019

Email ThisBlogThis!Share to TwitterShare to FacebookShare to Pinterest
Labels: ATP