Revelations of the third kind - The Bigelow/Mitchell 1996 letter emerges

"For some time now Richard Dolan has encouraged me to become involved in the story of the two leaked UFO documents. I have resisted but Monday morning I will enter the game and make a posting.

I will post a third document that will begin to explore where these documents came from and what is going on."

The document has now been released by Cameron.

In this post, I want to take a look at this third document. It is a three page letter, dated 13 May 1996, from Robert Bigelow, and addressed to Edgar Mitchell. However, it is clear from the last paragraph of page two, that the letter was sent to all members of the National Institute for Discovery Science (NIDS) Science Advisory Board (SAB.) 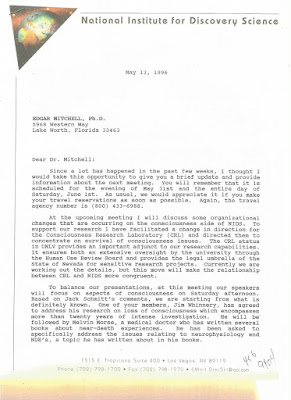 The letter opens with:

"Since a lot has happened in the past few weeks, I thought I would take this opportunity to give you a brief update and provide information about the next meeting. You will remember that it is scheduled for the evening of May 31st and the entire day of Saturday, June 1st."

In Vallee's book "Forbidden Science: Volume Four," (FSV4) in a diary entry dated 1 June 1996, Vallee writes that he attended the fourth meeting of the NIDS SAB, in Las Vegas.

Bigelow next advises that "One of your members, Jim Whinnery has agreed to address his research on loss of consciousness which encompasses more than twenty years of intense investigation."

"This fourth meeting...was excellent, thanks to three separate presentations led by General Jim Whinnery. He showed videos of pilots losing consciousness in centrifuges and in actual cockpits..."

The letter then follows with:

"He will be followed by Melvin Morse, a medical doctor who has written several books about near-death experiences..."

"The other presenters (one by Edgar Mitchell) also touch on the near-death experience..." writes Vallee on page 314.

On page two of the Bigelow letter, Bigelow writes: 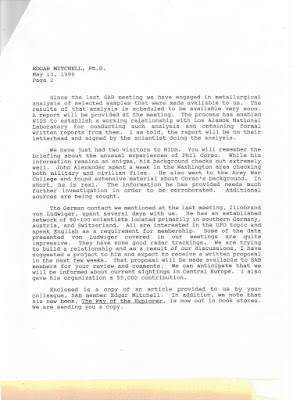 "Since the last SAB meeting we have engaged in metallurgical analyzes of selected samples... The process has enabled NIDS to establish a working relationship with Los Alamos National Laboratory..."

From FSV4, "The implants from the last session have now been analyzed at Los Alamos."

The Bigelow letter then refers to Phil Corso, and the fact that John Alexander, then a NIDS employee, had spent some time in Washington conducting a background check on Corso.

FSV4 on page 307 in a diary entry dated 3 May 1996, states that John Alexander had been in Washington conducting a check on the background of Corso.

Paragraph three, of page two of the letter refers to:

"The German contact we mentioned at the last meeting. Illobrand von Ludwiger...I have suggested a project to him...We can anticipate that we will be informed about current sightings in central Europe. I also gave his organization a $5,000 contribution."

"The Institute has also connected with Illobrand von Ludwiger, who investigates abductions in Germany and Austria."

The last paragraph on page 2 includes:

"Enclosed is a copy of an article provided to us by your colleague, SAB member Edgar Mitchell. In addition we note that his new book, The Way of the Explorer is now out in book stores. We are sending you a copy."

This paragraph, indicates to me that although the letter was addressed to Edgar Mitchell, it did in fact go out to all SAB members. 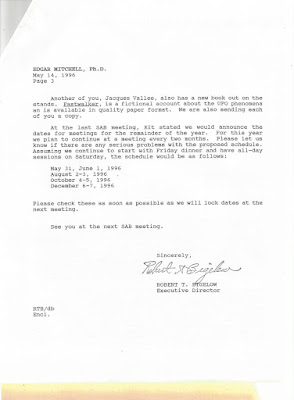 The reason that I am comparing the contents of the May 1996 Bigelow letter to Vallee's diaries, only published in January 2019, is to show that the two match in close detail. Thus one can reasonably conclude that the NIDS letter of 13 May 1996 is the genuine thing.

In my opinion, the reason that Grant Cameron has provided us with this letter from Bigelow to Mitchell, is to again focus the debate on the fact that the three released documents; i.e. the Davis/Bigelow memo of 23 March 2001; the Davis/Wilson notes of 16 October 2002, and this latest third document from 13 May 1996, all come from the files of the late Edgar Mitchell.
By Keith Basterfield at June 17, 2019