When interviewed for the book, Green describes one area of his work "I'm interested in the notion of people injured physically by anomalous events....Often these events are perceived as (involving) unidentified aerial phenomena, or UAPs..." (p.396.) When speaking of his patients in this area, he states "They are all high functioning individuals, many prodigious savants..."

Jacobsen then goes on to one area of the work of Garry P Nolan, whose expertise lies in the areas of "...genetics, immunology and bioinformatics." (p.398.) Nolan is "...mapping Green's patients' DNA and immune systems. They are looking for patterns among the patients..." (p.399.) Nolan, at interview, says he is "...also mapping (DNA and immune systems) of people and their families who claim to be remote viewers or have anomalous perception." (p.399.)

Jacobsen quotes Nolan as saying "Some people (seem to) repeatedly attract the phenomena or the experiences...They act like an antenna or like lighthouses in the dark."

EarthTech International is a private company with a research Division, the Institute for Advanced Studies at Austin (IASA.) IASA was founded by Hal Puthoff in 1985, and was incorporated under the name EarthTech international in 1991. Its website describes several areas of interest including one titled "Life Sciences." IASA consults for both public and private clients. The website advises that "EarthTech International and the Institute for Advanced Studies in Austin actively engage in numerous collaborations with industry, the US government, scientific research foundations and academia. We also collaborate with non-profit scientific research institutes such as the Tau Zero Foundation, the Fetzer Institute and Icarus Interstellar, Inc."

"An important direction of IASA for the past decade has been the Emergent Life Sciences. Specifically our network of forensic physicians and clinical specialists in Genomics, Immunology, Neurology and Neuroimaging have several clinical translational medicine research sponsors.

Our goal: The forensic diagnosis of enigmatic illness, treatment, protection and improved patient well-being using the latest Neurosciences and Genomics.

Institute medical scientists have mapped emergent evidence of correlations between energy sources and the life sciences in discovery of new injury diagnostics after patients have been exposed to unusual near-field anomalous effects believed related to advanced or experimental propulsion, or unknown devices under test and evaluation."

Comment: The content of the last paragraph above, seems to be describing the exact type of work being undertaken by Green, who is a forensic physician.

* Studies of Brain Biomarkers and related heritable DNA related to high performance, cognition, learning and intuition when under stress.

1. The last paragraph above, would seem to me to relate closely to Nolan's work on Green's patients, as described by Jacobsen.

2. Note that the three areas above. are listed under "Current client interests" i.e. someone ( a client of EarthTech) is interested in these areas. A "client" is suggestive of a contracted piece of work being undertaken by EarthTech on behalf of a "client" i.e. an industry body, the US government; scientific research foundation etc.

One of the speakers of the recent 2018 Space Genetics Symposium, organised by the Consortium for Space Genetics, Harvard Medical School, Harvard university, was Dr. Garry P Nolan. The title of his talk was "Can genetic differences in intuition and cognition drive success in space?"

Note the title of Nolan's talk,  and one of the IASA's "current client interests" is about (high performance) cognition and intuition.

Thanks to Twitter user @Jay09784691, I found out that Green and Nolan are not the only mainstream researchers interested in links between genetics and exotic phenomena. The Institute of Noetic Sciences in the US have a current project exploring this area.

More details of the project are shown in the image below. It is being funded by a grant from the BIAL Foundation, which was established in 1994 by Laboratory BIAL  and the Council of Rectors of Portuguese Universities.'Its mission is to foster the scientific study of the human being from both the physical and spiritual perspectives.'

It is Garry Nolan of Stanford University.

It seems to me that there are at least three patterns which emerge from data about UAPs and their interactions with individuals:

Pattern one is that some people who have a close encounter with UAP incur unusual injuries. So Green is checking out the DNA and immune systems of these people. Rendlesham Forest, (1980, United Kingdom) witness John Burroughs, is one person who has openly spoken of giving DNA samples to Kit Green.

Pattern three is that individuals who have close encounters with UAP report associated paranormal phenomena at a rate higher than the average population, so check out their DNA and immune systems.


Questions which come to my mind include

1. Who is funding the work of Green and Nolan in these areas?

2. Who are the clients of IASA who are interested in "Interaction of novel energy and propulsion systems causing both Epigenetic injury and Central nervous System Pathology?"

3. What was the significance of the brain scan image below? The image was once to be found on the EarthTech International website, under the "Life Sciences" area,  but when UAP researchers pointed it out, the image was removed and has never been replaced back on the website. 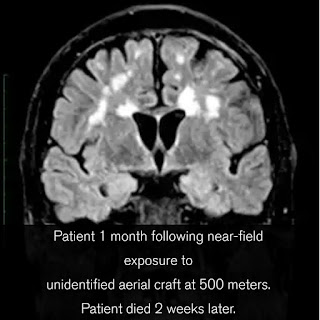