This is the fourth in my series of posts based on material from the 2017 United Kingdom UAP files release. The UK National Archives advised that they would not be uploaded these files to their website, unlike previous releases. In addition, as the Archives require payment for the use of images of these documents, if they are placed on a website; I have chosen not to provide such images in my series of posts.

Various UK defence intelligence units within the Ministry of Defence (MOD) were on the distribution lists for incoming UAP reports. However, published analyses of the raw data, are few and far between.

One notable exception is to be found on file DEFE 24/3126/1 titled "Space Debris Impacts in Scotland/NE England on 23 September 1997.' It is a Scientific and Technical Memorandum - No. D/D150/97/17, and originally marked 'UK Restricted.'

The report, 12 pages in length, is an in-depth analysis of reported sightings over a wide area of the northern UK on 23 September 1997.

Between 0700 and 1000 zulu (UTC - the old GMT) on the morning of 23 September 1997, there were at least 15 sightings reported to ARCC Kinross. Individual reports cited the possibility of an aircraft crash; flares; a flash in the sky; and an explosion.

Reports came from people on the ground and from crews of aircraft in flight. Included in these observations were reports of a 'number of possible impacts.'

After initial suggestions of a crashed aircraft were eliminated; the Royal Observatory Scotland, suggested that a high altitude bolide (bright meteor) might account for the observations. Shock waves were detected by the British Geological Survey, before 0930z, near the Moray Firth.

The report, noted that a bolide 'does not account for all the observations reported to the police...' In addition, two of the observations from aircrews were one hour apart. The report then examined the possibility of more than one bolide being seen. However, it finally discounts the bolide hypothesis.

The final suggestion was that the entire group of sightings was due to the re-entry into the atmosphere of  fragments of the Russian satellite Cosmos 2343, which had been launched into a low earth orbit on 15 May 1997. Destruction in orbit on 16 September 1997 had left 50 smaller pieces. The report concludes that fragments of Cosmos 2343 were the most likely cause of the 23 September 1997 sightings.

1. As I mentioned, it is rare to see such an analysis from a defence intelligence area of the UK MOD. The distribution list for this report (90 copies) makes for interesting reading and includes D151; D152 and D157.

2. I examined the suggested cause, and found relevant data in the publication titled 'History of on-orbit satellite fragmentations' 13th edition, NASA, 2004.  Based on the raw data provided at the beginning of the UK MOD report, I agree with the report's assessment. 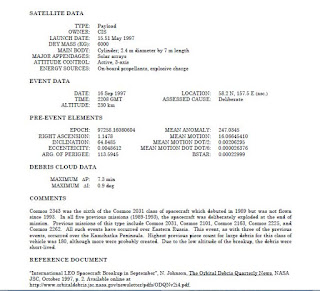 3. My former co-blogger, Pauline Wilson, wrote two fascinating blog posts about the interest of the United Kingdom; Australia; and New Zealand's defence intelligence agencies, and UAPs. These may be read here and here.

4. What is interesting, is that the focus of each of the UK, NZ and Australian defence intelligence areas, was said to be the national security interests of their respective countries. Each stated that, they had no scientific interest in UAP reports. Not withstanding these statements, the UK UAP files do contain some reports which seemed deserving of a follow up and analysis. I will simply give a couple of examples:

On Saturday 24 October 1992, at 2015hrs local time, a motor bike rider, was travelling on the A352 near Owermoigne, Dorset. The witness reported that in a clear sky, an object came down from above and travelled alongside the motorbike for 100 yards, then shot off into the sky. It was described as a yellow/orange 'bright blob.' The duration of the sighting was about 30 seconds. The witness was sufficiently intrigues as to report the incident to local police.

Even though these are not 'classic' UFO cases, they still seem to have been worthy of further attention, even if they ultimately were found to be caused by a rare atmospheric phenomenon.
By Keith Basterfield at December 04, 2017