This post continues a look at aspects of the contents of the release, of the latest batch of United Kingdom UAP files. This time, some documents which appear on DEFE24/3129/1 titled 'Admin + General UFOs.'

On a file which contains numerous low level interest sightings, and general correspondence, there are three documents which refer to an intriguing 1982 observation.

The incident concerned the observation of 'A big object, larger than RC 135, with a multitude of flashing lights 20 at a time.' No shape was recorded.

It was a 'Visual siting and radar contact by crew of United States aircraft type RC 135, callsign Beano 73. Nothing seen by Olympus radar.'

The object was first seen to the south from flight level 350, and was initially estimated to be 'about two miles from wing of RC 135, moved position around aircraft and closed.'

The object's movement was described as 'Object tailed Beano 73 for 90 mins on its northeast/southwest race track between positions QJED2020 and QJDC4000.'

The weather was described as 'clear night conditions.'

The incident was reported 'while occurring to duty controllers at 280SU, RAF Troodos/Olympus radar.'

Other information recorded on the telex was 'Reported by crew of Beano 73. Reliable. Witnessed by whole crew, three fighters intercepted Beano 73 and report an object departing to the south but nothing seen visually.'

1. An RC 135 was a USAF reconnaissance aircraft.

1. We spoke reference to the UFO incident which occurred on 19 Oct 82, when a USAF aircraft flying in the Eastern Mediterranean to the south of Cyprus reported an unidentified aircraft flying alongside. The incident was monitored by 280SU and we have now received film of the 280SU radar picture and the tape on which radio transmissions were recorded.

2. We have very little to add to the information which is on the film and tape. However, you will wish to know that the two USN F14 aircraft were launched from a carrier and an RAF Phantom, which was on a night flying exercise, were sent to assist. None of these three aircraft reported seeing the 'UFO,' nor was it seen on any ground or seaborne radar, including at 280SU. We have a strong suspicion that the 'UFO' was a mirage effect from lights on the coast of Israel or Lebanon.

3. We are arranging for a transcript to be made of the tape recording and will let you have both the transcript and the tape as soon as possible. We attach the film taken at 280SU.

4. The US authorities wish to have copies of any reports which might result from your studies. We will arrange for them to received a copy of the voice transcript.'

Something is not quite right here. Does it mean that the RC135 radar showed it going south and they told the fighters this? We do not know.

On the bottom of the second document, there is a hand written note which reads:

The third document appears to be the acknowledgement of the job request for prints from the film. It shows Ops (GE)2A(RAF). Room 4258 MOD main building. It refers to 'your request dated 1.11.82.' Allocated job number 3110/82.

1. This certainly appears to be an intriguing case. However, we are lacking a copy of the transcript of the voice recording, and copies of prints made from the 'film of the 280SU radar picture.'

2. No one that I am aware of, has even previously heard of this sighting prior to the release for this file; nor does there appear to be any available US documentation about it.

3. UK researcher Dr David Clarke wrote a piece about the sighting, shortly after the release of the files. He provided the following additional information:

4. David Clarke states that the incident commenced "shortly after 4 pm local time.' However, the DEFE file telex gives the commencement time as 1605z i.e. 4.05pm zulu. As local time is 2 hours ahead of zulu time, that makes the commencement of the incident, as 6.05pm local time. This 2 hour difference, means that the event commenced and finished in darkness. It also explains why the RAF Phantom aircraft sent to investigate is said to have been on a 'night training exercise.'

I consulted two different astronomical programs and found the following, based on latitude 35.13N; 33.43E ( i.e. Cyprus; not the location of the aircraft at the time, which is not actually known from the file's documents.)

5. Can we locate any weather data which may or may not throw some light on the 'We have a strong suspicion that the 'UFO' was a mirage effect from lights on the coast of Israel or Lebanon,' comment from the RAF?

The University of Wyoming maintains a data base of upper atmospheric soundings  I checked these for any available data from Nicosia, Cyprus for 19 October 1982. Unfortunately no data is available.
However, I did find data from station 40179, at Bet Dagan, Israel, for both 1200z 19 October 1982 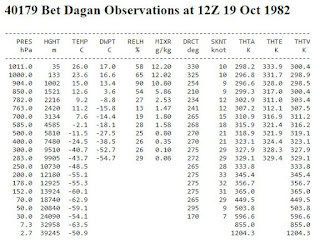 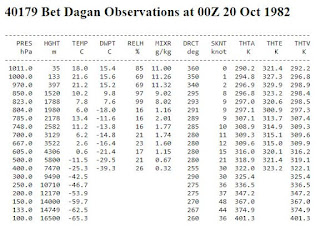 No doubt, several UK UAP researchers are attempting to locate individuals who served with 280SU in 1982, in an effort to find someone with first hand knowledge of the event. In addition, hopefully someone is also on the track of the officials whose names are redacted in the official documentation.