Between 1951 and 1975, the Police Department of the West Australian government kept a file titled 'Unidentified Flying Objects.' The State Record Office (SRO) of Western Australia posted some 55 pages of this file, to their website around 2015. I came across it and wrote about the contents of the available pages, in a blog post dated 3 July 2015.

It wasn't until 2017 that I noticed that there was a gap in the folio numbering of the 55 available pages. This indicated that there might be other folios of the file available to me. I therefore communicated with the SRO, and indeed the full version of the file contains 156 images. I have just recently purchased a copy of the full file. 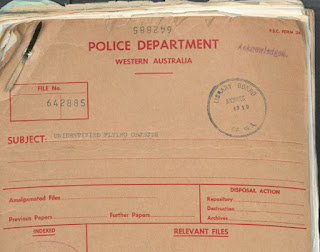 
Sightings in this section

26 August 1954. V E, R V and R M H Antonio were in a car near Monument Hill, near Northam at 2.15pm and sighted a grey, oval shaped object in the clear sky. It was stationary.

15 December 1954. At 3am, two men, travelling south by car from Carnarvon to Geraldton saw a light in the ESE sky. Seen for 20 minutes. They reported seeing 'portholes,' along the side of the machine. The object rotated every 30 seconds.

6 March 1957. Three men were travelling west along the Great Eastern Highway at 12.30am when they sighted a very bright green light with a tail, above trees. It rose up, then arced over the trees. Duration 4-5 seconds. It lit up the whole countryside.

3 July 1957. A number of people at the Fibre Queen Asbestos mine, 126 miles SE of Port Hedland, said they saw , at 10pm, a very bright light light up the whole area. Several explosions were then heard.

28 November 1957. At 10.45 am a Mundrabilla station hand heard a loud explosion and saw a cloud of dust and smoke rise into the sky. Soon after that he saw an object , cigar shaped, 030 feet long with no wings. Also at 10.45am two persons some distance away saw the same thing for 5 minutes and thought it was a guided missile. It came in from Eucla, circled at Madura and then went eastwards over Mundrabilla. One person reported that a piece fell off it. There was a blue vapour trail. The RAAF said it was a high flying Canberra jet aircraft.

19 August 1960. At Yallalong Station, 90 miles from Mullewa at 4pm the station owner reported seeing a bright object in the sky, The manager of Curbar Station 160 miles north of Mullewa heard an explosion.

5 August 1961. At 8.20am at Mt Hale Station. The very well known story of multiple objects dropping 'angel hair.' Interviews with some of the observers. For my catalogue and analysis of this and similar 'angel hair' cases, click here.

2 August 1964. At Wittenoom, at 3am , Mr E Rossi was at the Hamersley Ranges, 7 miles south of Wittenoom. He said he saw a 200 foot long object with square windows. It was well lit from within. There were no wings, and no tail. It was travelling at an estimated 200 mph, south to north. It had a tail of flame. It was also seen by three other men. For my cold case review click here.

27 September 1965. At 3.30 am, C K Hallett and M F Holbrook were travelling by truck near the Cane River, 30 miles north of Onslow. Their headlights lit up a cylindrical object. estimated to be 10 feet high and 10 feet in diameter, which took off from the ground at high speed. The two men travelled on in the truck. 10 miles later, they met two other people attending to a broken don truck. After being at this new location for 10 minutes the object appeared again. It swooped down over the two trucks at 200-300 mph. It lit up the surrounding area with a pale green light. The object itself was iridescent green and was lit up all over. It then climbed to a high altitude and disappeared from view.

The Police interviewed Holbrook who added that the object originally travelled roughly east to west, slightly towards them. It crossed the road in front of them and landed, then immediately took off again at high speed. It rose at a 45 degree angle and had descended at a slightly less angle. There was no noise from it. It was pale iridescent green and glowing. It had touched the ground for only a few seconds before rising up again.

On the second viewing at about 4 am, they were facing sought on the bank of the Cane River. The object had been travelling east to west at a low altitude slowly descending as if going to land again. He judged that the object would have been again landing in the same area as on the first occasion. It was the same colour as the first time, but was also emitting a bright white light, sparkling. There were small sparklets falling out of the light. The object passed within an estimated 100 yards of the observers and was silent.

14-15 August 1966. P G Johnston of Kununurra, was driving a bulldozer at night. At 11.54pm on the 14th he watched bright lights come from the south-west, slow down, and stop over a hill at an estimated distance of 1 mile. Then he saw a row of red lights, which appeared to come from behind the first light. There were 6-8 of them. These were not very bright. A few seconds later the red lights went out and the white light grew brighter, in fact too bright to look at.

An area about 12 feet around him lit up like a searchlight. Duration 5 minutes. The bright light went out and four less bright red lights travelled down behind a hill over which they had been stationary. The witness then sat and eat a meal. Then lights appeared from behind the hill and approached to within a 1/4 mile. These hovered 20 foot in the air. A bright white light came on and he could see this clearly. After 3-4 minutes this light went out and he then saw red lights over Kun Air strip.

By starlight he observed a 'flying saucer' type machine. It tilted as it rose so he could see its top. It was silver in colour, 10 feet high, 180 feet long and 80-100 feet wide. Red lights appeared to be portholes on the long side. As it rose, what seemed to be 3-4 points of vapour trailed from the underside. This wandered about the valley for 1 1/2 hours before seeming to land on hills. The lights were there till the first light of dawn on 15 August.

14 February 1967. At around the same time as there was a search for the American Biosatellite believed to have come down over Western Australia, there was a sighting between 7 and 7.30pm of an orange light seen from Bunbury.

30 October 1967. The classic encounter case, near Boyup Brook, between a car and an object, where the driver states that the car instantly decelerated from high speed without any effects, and then accelerated back to high speed in an instant, again with no effect on the driver. For my cold case review click here.

11 March 1970. AT Christmas Creek Station, 60 miles east of Fitzroy, a cruising object left a vapour tail, as it travelled NW at high speed. The trail was not constant but broken. Smoke followed it to the ground.
By Keith Basterfield at December 11, 2017