I have previously written a number of times about the former Australian Department of Supply and files which it held on UAP; and the 1971 ANZAAS UAP symposium.

Sydney researcher Bill Chalker, included images of an internal Department of Supply memo, on his blog, which was of great interest to me. 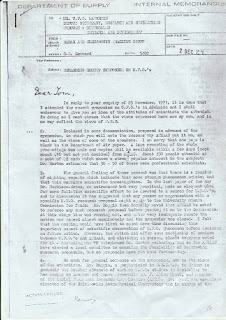 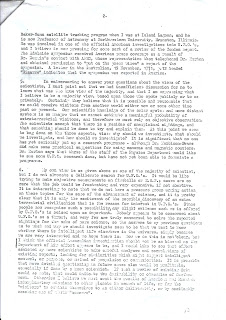 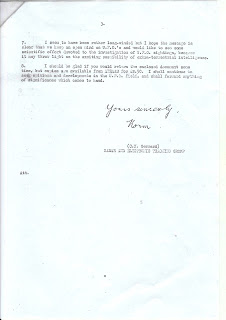 In view of this interest, I have transcribed the text of the memo below. I will then provide some comments about the contents, and the broader context.

This is an internal memorandum to Mr T F C Lawrence, Deputy Secretary, Research and Engineering, Department of Supply, from  C N Gerrard, Radar and Electronic Tracking Group, dated 2 December 1971. The subject was 'Regarding recent symposium on UFOs.'

'In reply to your enquiry of 25 November 1971, it is true that I attended the recent symposium on UFOs in Adelaide and I shall endeavour to give you an idea of the attitudes of scientists who attended. In doing so I must stress that the views expressed here are my own, and in no way reflect the views of W.R.E.

2. Enclosed is some documentation prepared in advance of the symposium , in which you will note the reasons why ANZAAS put it on, as well as the views of some of the speakers. I am sorry that one page is blank in the Department of Air paper. A tape recording of the whole proceedings was made and copies will be available within a few days (cost about $10 but not yet decided) from ANZAAS. About 350 people attended at a cost of $2 each which shows a strong popular interest in the subject; Dr Horton estimates that 30-50 of these were professional scientists.

3. The general feeling of those present was that there is a residue of sighting reports which indicate that some strange phenomenon exists; and that this warrants scientific investigation. In the last paper of the day Dr Herbison-Evans, an astronomer but very practical, made an eloquent plea for some full-time scientific effort to be devoted to a search for UFOs and in discussion it was suggested that any person or organisation with a specific UFO research proposal might apply to the University Grants commission for funds. Dr Duggin then formally moved that ANZAAS be asked to referee any such research proposal before referring it on to the commission. At this stage time was running out, and after very inadequate debate the motion was passed almost unanimously and the symposium was  closed. I felt that the meeting  would have liked to spend  more time discussing this important aspect  of scientific observation  of UFO phenomena before deciding on future action. However, the motion did offer some continuity of contact between UFOs and ANZAAS and clutching at straws, almost everyone voted for it - including me. I telephoned Dr Horton yesterday, and so far ANZAAS have elected a local committee o consider the feasibility of refereeing research proposals, but no proposals have yet been forthcoming.

4. So much for general comments on the symposium, now to the views of the scientists. Dr Duggin, a geophysicist in CSIRO in Sydney is probably the leading advocate of serious UFO studies in Australia; he has worked in America and knows personally DR J Allen Hynek, and members of the Aerial Phenomena Research Organisation (APRO.) Dr Hynek was associate director of the Smithsonian Astrophysical Observatory and in charge of the Baker-Nunn satellite tracking program when I was at Island Lagoon, and he is now Professor of Astronomy at NorthWestern University, Evanston, Illinois. He was involved in one of the official American investigations into UFOs, and I believe is now pressing for some sort of review of the Condon report. The Adelaide symposium received American press coverage as a result of Dr Duggin's contact with APRO whose representative then telephoned Dr Horton and obtained permission to "put on the press wires" a report of the symposium. A letter in the Australian, 19 November 1971, p12 headed "Bizarre" indicating that the symposium was reported in  America.

5. In endeavouring to answer your question about the views of the scientists, I must point out that we had insufficient discussion for me to learn what was the true views of the majority, and that I am expressing what I believe to be the majority view, based upon those who spoke publicly or to me privately. Certainly they believe  that it is possible and reasonable that we could receive visitors from another world either now or some other time past or present. Our scientific knowledge of the solar system and more distant systems is so meagre that we cannot estimate a meaningful probability of extraterrestrial visitors, and therefore we must rely on objective observations. The scientists accept that there is a residue of unexplained sightings and that something should be done to try and explain them.  At this point we seem to bog down on the three aspects, viz - why should we investigate; what should we investigate, and how should we investigate? It is significant that no-one has yet seriously put up a research programme - although Dr Herbison-Evans did make some practical suggestions for using cameras and magnetic counters. Dr Horton says that three of the staff of the Physics department would like to see some UFO research done, but have not yet been able to formulate a programme.

6. My own view is as given above as one of the majority of scientists, but I do not advise a deliberate search  for UFOs. It would be like trying to make objective measurement of fireballs or ESP; case are so rare that the job would be frustrating and very expensive, if not abortive. It is interesting to note that we do not have a pressure group urging action on these topics for the sake of the advancement of science, and it is pretty clear that it is only the excitement of the possible discovery of an extra terrestrial civilisation that is the reason for interest in UFOs, since people now recognise such a possibility, any slight evidence such as is offered by UFOs is seized upon as important. Nobody appears to be concerned about UFOs as a threat, and very few are truly concerned to solve the reported sightings for the sake of pure science, so the answers to my previous questions as to what and why we shall investigate seem to be that we want to know whether there is intelligent life elsewhere in the universe, simply because we are very interested and we hope there is. How we do this is not clear, but I think the official Australian investigation should not be as biased as the department of Air effort appears to be, and I would like to see that effort assisted by more scientists to make careful analyses and correlations of existing reports, looking for similarities which might suggest intelligent control, or purpose, or method of propulsion or communication. It is probable that more detailed questions in future cases also would be profitable, especially if done by a keen scientist. If such a review of existing data could be made, that would indicate the desirability or otherwise of further work. Otherwise I believe we must await the results of American or Russian interplanetary missions to other planets in search of life, or for the "visitors" to exhibit themselves to us either deliberately, or by accidentally crashing one of their "saucers."

7. I seem to have been rather long-winded but I hope the message is clear that we keep an open mind on UFOs and would like to see some scientific effort devoted to the investigations of UFO sightings, because it may throw some light on the exciting possibility of extra-terrestrial intelligence.

8. I would be glad if you would return the enclosed document some time, but copies are available from ANZAAS for $2.50. I shall continue to seek opinions and developments in the UFO field, and shall forward anything of significance which comes to hand.'

In summary, here we have a December 1971 internal Department of Supply memorandum making some very intelligent comments about the need for scientific study of UFOs.

1. There are three known former Department of Supply files, dealing with our subject matter. They are:

A copy of the December 1971 memo above, was not found on any of these three files.

2. A check of the National Archives of Australia's RecordSearch using the keywords 'Radar and electronic tracking group' revealed files, in the file series D891 (WRE Salisbury) with control symbols between N74/1855 and N74/1862. None were open, and each seemed to be a photograph only. I found nothing using the keywords 'Research and engineering.' However, there are literally thousands of not yet examined files about the Department of Supply, Woomera, missile testing etc etc.

3. C N(orm) Gerrard was in the Department of Supply's Radar and Electronic Tracking Group, and states his intention to 'continue to seek opinions and developments in the UFO field, and shall forward anything of significance which comes to hand.' His memo was sent to Mr T F C Lawrence, Deputy Secretary, Research and Engineering, Department of Supply.

Perhaps this area was the one which had expressed an interest to the Department of Defence? Have any blog readers thoughts on this?
By Keith Basterfield at September 09, 2017