'Nest-building flying saucers found in land down under.'

At about 9:00 am. local time, on 19 January, 1966, banana grower, George Pedley, aged 28, was driving a tractor about one half mile from a farm house owned by Albert Pennisi. Pedley's attention was drawn by a 'hissing' sound, clearly heard over the noise from the tractor's engine. He looked about for the source of the noise, and saw an unusual object some 25 yards away. He described it as  about 30 feet in the air, rising vertically. Its shape was that of 'two saucers face to face.' It was light grey in color, being dull, non-reflective. Its size was estimated as 25 feet long by eight to nine feet deep. No structured features were visible. The loud 'hissing' noise seemed to diminish as the object rose. It rose to a height of 60 feet, then departed, climbing at about an angle of forty-five degrees, extremely fast, to the South-west. For the duration of his observation, which was only 5-6 seconds, it appeared to be always rotating.

The local paper, the 'Tully Times,' carried an account. 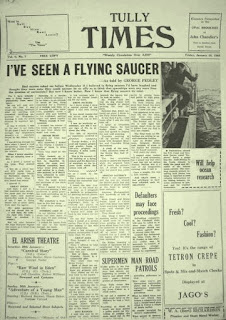 This was quickly followed by articles in newspapers in the capital cities of Brisbane, Sydney and Melbourne. 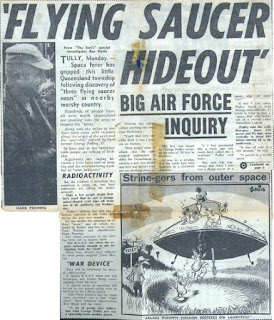 Recently, researcher and historian Barry Greenwood, of Boston in the USA, visited the archives of the J Allen Hynek Center for UFO Studies, in Chicago. One of the aims of Barry's visit, was to keep an eye out for any Australian material. He found quite a few Australian items, and kindly forwarded me a copy of them.

One of the things which I had previously not been aware of, was the global media attention which this event received. With today's Internet access, it is understandable when an item 'goes viral.' In 1966, due to widespread media coverage, the Euramo incident also 'went viral.'

Barry located a number of international newspaper articles, including the following. No doubt this is only a representative sample. 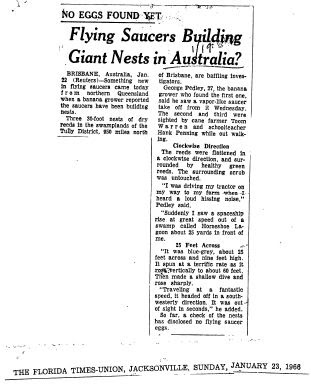 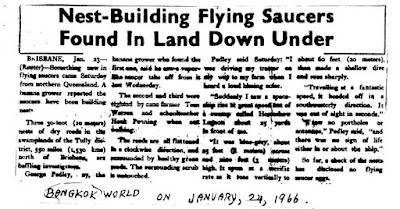 A question arises in my mind, as to why this particular Australian incident should have caused so much international attention? You will notice the frequent use of the word 'nest' in the newspaper headlines. Was it the use of this evocative word 'nest' which intrigued newspaper editors?  Does any blog reader know when the word 'nest' was first associated with certain UAP physical trace cases?

Some comments about the Euramo incident
﻿
While gathering together a range of material on the incident for a review of the data, I noted a few initial things.

1. The duration of the visual sighting of the unusual 'object' was much shorter than many people assume from reading the accounts on the Internet. The investigation report published by the Queensland Flying Saucer Research Bureau (now UFO (Research) Queensland, Inc.) gives the duration as only 4-5 seconds. This is a terribly short time for an individual, encountering an unexpected event, to take it all in.

2. There was an article written, at the time, by an anonymous consultant of the Victorian Flying Saucer Research Society.

'...of the various pieces of evidence presented above, as many are in support of, as are in conflict with, the hypothesis that the phenomenon was caused by the actions of a whirlwind. It is therefore not justifiable to state that it could not be feasibly explained by such action.'

Here we have a consultant who has been connected with studies in atmospheric sciences, suggesting a 50/50% chance of the explanation being a meteorological event.

3. Local newspaper accounts, and indeed local UAP researchers, noted that similar physical traces had been found in Far North Queensland, prior to the Euramo incident, and attributed to natural causes. A search of the UAP literature since 1966, also reveals a large number of other 'nests' had been reported in the area.

In short, a rotating, grey. non-structured object, simply disappeared in mid-air after a few seconds of observation, on a calm, sunny morning - conditions suitable for the formation of  a rotating atmospheric vortex. The swirled reeds suggested that a rotating force had been applied - again suggestive of a vortex.

So, I pose the question as to whether or not the Euramo 'object' was a classic 'flying saucer' or something more mundane?

Sydney based researcher Bill Chalker, who has extensively researched the Euramo incident argues for the classic 'flying saucer' interpretation. I am not so sure.
By Keith Basterfield at September 13, 2017