"A supposed escaped balloon crossing the centre of Western Australia" - 1893

In an earlier post I wrote about a "balloon" seen over Western Australia in 1894. I now have additional information about this incident.


I originally received an email from Peter Bridge of Hesperian Press in Western Australia. Peter told me that in 2004 he had reprinted L R Menzie’s book “A Gold Seekers Odyssey” first printed in 1937. Peter read a number of old newspapers for biographical details of prospectors and found the following account, and added it as an appendix .
It comes from the “Australian Advertiser” newspaper (a precursor to the “Albany Advertiser”) dated 15 October 1894. It is to be found on page 156 of “A Gold Seekers Odyssey.”


The account
“A correspondent signing himself “Eye witness” writes to the Victorian Express as follows from the Murchison goldfield:- Although rather late, I beg to inform you that about the second week in October, Mr Menzie, the manager of The Star of the East mine, was fixing the tram work of the battery, and when placing one of the uprights he caught sight of a large balloon passing along the line of sight.


Naturally, such an extraordinary visitor caused an ejaculation of surprise from Mr Menzie. All hands (some ten of us) looked up and perceived the object that so surprised Mr Menzie to be a large balloon travelling at a terrific rate from north-west to south-east. Although at a great altitude, the balloon could be distinctly seen in every outline and was travelling at such a rate of speed that the body of the balloon was considerably in advance of the car.
The ariel (sic) visitor created more than surprise at the time and every man was going to write to the paper about it but the old-old story every body’s business invariably turns out to be no body’s business and thus the matter was never published.


Joe Clarke and Quinn who are now shareholders in the Lady mine and myself were among the men working at The Star of the East with Mr Menzie and witnesses the sight described. It would appear probable that the balloon escaped from any port of the Indies or The Strait settlements as it came from that direction.
The general opinion at the time was that possibly it was being prepared from some experimental military work or probably for exhibition purposes when it broke adrift. It would indeed be interesting to know if it had been seen in any other part of the world and where it came from and where it has gone to.”


1. I visited the National Library of Australia’s TROVE digitised newspaper collection. Unfortunately they do not have copies of the “Australian Advertiser.”
2. I wondered if the reference to the Victorian Express was a reference to another newspaper?  Indeed TROVE revealed that there was a paper of this name. The “Victorian Express” was published in Geraldton, Western Australia between 1878-1894. TROVE did have copies. A search located the account in the Friday 28 September 1894 issue, on page 3. Here there was one slight difference in the account.

The date of the event is said to have been “…about the second week in last October.” As the item appeared in the 28 September 1894 issue it can only refer to October 1893, and not 1894 as I first assumed.  The story was headed “A supposed balloon crossing the centre of Western Australia.”


3.  Another search through TROVE revealed that a shortened version of the story did appear in the following newspapers:
a. “The Telegraph.” (Brisbane, Qld 1872-1941) on Saturday 5 January 1895 p.2. 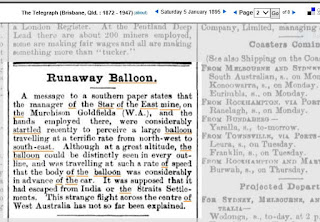 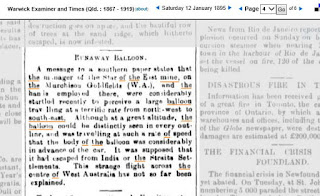 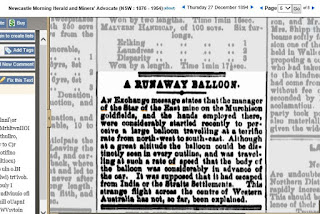 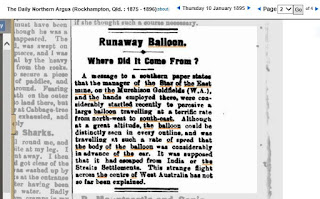 4. An Internet search revealed that Leslie Robert Menzie was a prominent figure in the search for gold, both in Australian and overseas. He was indeed the Manager of The Star of the East Mine. This mine was located 620 kilometres north-north-east of Perth, the capital city of Western Australia. The nearest town to the mine was Meekatharra, some 40 kilometres away, the latitude of Meekatharra is 26.6 degrees South and its longitude is 118.5 degrees East.
5. Having established that the location existed, and that the main witness' details are consistent with an historical figure, can we say anything about the object itself? Unfortunately, we do not have an exact date and time. All we have is "about the second week" in October 1893. Presumably the observation occurred during daylight hours.
We do know that the object travelled from north-west to south-east. However, without recourse to weather details we cannot even say whether or not the object was travelling with the wind, across the wind or in what direction the wind was blowing at the time. In fact, the article makes no mention of the weather conditions at the time.
The object's appearance was such that it is described as a balloon, and it is noted that there is mention of a "car" presumably referring to the idea that a large balloon would have a gondola. However, then the account says it "...was travelling at such a rate of speed that the body of the balloon was considerably in advance of the car." I am not sure what to make of this. No sketch is provided to clarify this.
6. In summary, I think that the best I can do is record what I have found, and leave the reader to deduce any further information that they may be able.
By Keith Basterfield at December 11, 2015