"As far as I can tell there's a data warehouse from Bigelow called "Capella" (2008-2011). It's referenced in this Vallee presentation from 2014. Also BAASS ended in the 00's.Contained photos, radar data, recordings, videos, maps & satellite views. www-togepain02.cnes.fr/fileadmion/documents/15-VALLEE_sli.pdf."

I went to the slide presentation and the following are the three relevant slides: 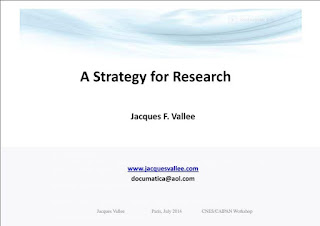 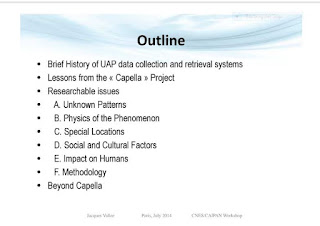 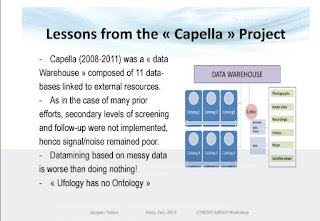 Although these three slides do not state that the "Capella" Project belonged to BAASS, a fourth slide titled: "A brief history" (concerning data collection activities) lists NIDS and BAASS. In addition,  the 2008-2011 date range is indicative of the BAASS era, especially their contract with the Defense Intelligence Agency (DIA) for work on the Advanced Aerospace Weapon System Applications Program (AAWSAP.)

I then found another PDF file which contained the text of Vallee's Paris presentation. Here, on page four there is:

"In the United States the National Institute for Discovery Science ("NIDS") and the Bigelow Aerospace Corporation have initiated a series of special catalogues to safeguard their own reports from public source and from their staff. The author was tasked with the development of a data warehouse consisting of 11 separate data bases to support this research. The project is known as "Capella."

So, we are now sure that it was Vallee who developed "Capella."

Later on page six we find:

"The "Capella" Data Warehouse concept. The overall data structure for Capella has been published in both French and English on the author's website (www.jacquesvallee.com) under the title: "A system of Classification and Reliability Indicators for the Analysis of the Behavior of Unidentified Aerial Phenomena." The data warehouse uses a 6-layer system to describe the behavior of the phenomenon. It is detailed in reference 10 below, which is also available on the website."

1. Physical.
2. Anti-physical.
3. The psychology of the witnesses and the social conditions which surround them.
4. Physiological reactions.
5. Psychic.
6. Cultural.

I found no reference to "Capella" in this paper. 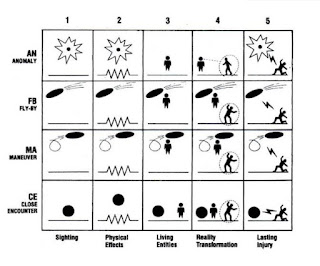 It then goes on to describe a classification system for observed maneuvres, and flybys. Finally it describes a system for the report's credibility where S = reliability of source; V = did a site visit occur? and p = probability of a natural explanation. Vallee notes that this system was in use by NIDS. There is no mention of either BAASS or "Capella" in this paper.


When was "Capella" in use?

I note that the 2014 Paris presentation states, that "Capella" was in use 2008-2011. I also note that on this slide Vallee has himself stated:

"As in the case of many prior efforts, secondary level of screening and follow-up were not implemented, hence signal/noise remained poor;" and "Data mining on messy data is worse than doing nothing!"

1. I checked copies of Vallee's books for references to "Capella" as a project (not the star named Capella). I found one and only one reference. This appeared in "Forbidden Science" Volume two page 72 which read:

"At Hynek's request I have updated my proposal for a research center, Project Capella. He is still trying to get it funded by the Oklahoma heiress."

2. Hal Puthoff, in his 8 June 2018 address to the Las Vegas SSE/IRVA conference stated:

"We as part of this program looked at some cases that were really good from Brazil. In 1977, 78, it was like Close Encounters of the Third Kind. A thousand pages of documents all done by the Brazilian Air Force investigative team, 500 photographs, 15 hours of motion film, a lot of medical injuries..."

Is this the sort of material which was coded for "Capella" databases?

3. I looked at the roles described on the LinkedIn website by a number of former BAASS employees. There I found:

4. Thanks to Twitter user Dennis @UAPreality for a lead to a 27 July 2014 interview on "Coast to Coast." This was between journalist George Knapp and Jacques Vallee, and titled "George Knapp the secret UFO conference that no one knows about." They discussed the 2014 Paris meeting. During this interview Vallee stated that 15 years ago he developed a data warehouse called Capella. He implemented it with Bigelow and NIDS. Vallee said that the warehouse had now grown, and he was ready now to take it to the next level. He had conversations after the Paris meeting with other experts in data bases and UFO researchers. He then said that we had missed a number of things that the data bases did not contain. He went on to mention Dick Haine's pilot reports and Chris Aubeck's ancient ufo cases. A lot had been undertaken outside of formal UFO groups, usually by a single individual assisted by a small team.

5. Thanks to Face Book user M J Banias for a lead to an article by author Diana Walsh Pasulka  This was an interview between Pasulka and Jacques Vallee, dated 21 November 2016. Part of the response by Vallee read:

"For those who have just discovered the world of "big data" because of the exploits of super computers winning at chess or GO against the best human champions, the technology seems almost magical: dump unstructured threads of information into a large binary warehouse and let "deep thinking" extract the salient patterns.

The technology works when the data itself is well-behaved, in particular for consumer trends, industrial maintenance and medical research. When the subject area lacks an ontology, as in the case of unidentified aerial phenomena, the same techniques are problematic because the software is likely to extract spurious or misleading patterns."

Has any blog reader further information on the "Capella" Project?
By Keith Basterfield at November 08, 2018

Background Oke Shannon's name came to prominence with the unveiling of the document titled "EWD notes" , aka "The Wils...