Some new information from the 27 October 2018, Centro Ufologico Nazionale talk by Luis Elizondo

Former head of the US government Advanced Aerospace Threat Identification Program (AATIP,) Luis Elizondo, gave a presentation at a meeting in Rome, organized by the Centro Ufologico Nazionale (CUN.) A video of his presentation, along with other presenters including Tom DeLonge, may be viewed here

On 30 October 2018, researcher Joe Murgia posted a transcript of the Elizondo talk. I wish to thank Joe for undertaking this transcription. Joe's work may be viewed here  or on Twitter at@ufojoe11. Quotations from the Elizondo talk are taken, with permission and acknowledgment, from Joe's transcript. I have also viewed the video presentation myself and taken my own notes.

Naturally, I was particularly interested to hear of anything new, which hasn't already been made available through a range of interviews between various individuals and Elizondo. So, the following points attracted my attention.

1. "Early 1980s. US service members in England, over a period of three days, encountered what cannot be described as anything else than extraordinary...several of these individuals that were involved In that incident, I had the privilege of debriefing myself. Furthermore, information involving this incident, within the next four months, will be forthcoming...The capabilities that were stored at that facility, were highly sophisticated and may have even led to UAP interest."

Comment: This refers to the 1980 Rendlesham, England events, well known to UAP researchers. The words "The capabilities that were stored at that facility, were highly sophisticated..." would appear to refer to nuclear weapons stored at the US base in the UK. This adds to comments made earlier by Elizondo that "Several of our nuclear silos along the northern tier, were temporally brought down."

I understand from US sources, that Robert Hastings who has focused on the relationship between nuclear weapons/bases/technology and UAPs, has spent time discussing this very issue with Elizondo. I look forward to the information to be revealed in four months time.

2. "In the late 1980's, we continued to have a steady stream of Soviet defectors. And on rare occasions they would share with us, insights into the Russian UAP program."

Comment: I hadn't personally previously heard anyone mention this as a fact.

3. In referring to a slide which showed part of an image of the August 2008 Defense Intelligence Agency solicitation for bids for work on the Advanced Aerospace Weapon System Applications program (AAWSAP), (clearly AAWSAP and not AATIP,) Elizondo stated "This slide is verbatim what the focus of AATIP was and what $22 million purchased."

Comment: The slide itself is titled "AATIP contract focus" yet is clearly labelled a solicitation for the AAWSAP not AATIP. If Elizondo continues to mix up references to the AATIP and the AAWSAP, then what hope have mere mortals like us got, when trying to unravel the program?

4. In discussing the nature of UAPs ability re sudden acceleration, Elizondo said "The objects we're witnessing are experiencing G forces well in excess of 200."

Comment: Compare this 200 G figure, with the Elizondo's comparison to the perhaps 9 G force experienced by a fighter jet, and the 20 G force which might cause structural damage to an aircraft.

5. Speaking of hypersonic velocity, Elizondo says "In some cases, these objects have been observed flying at 8000 mph and faster."

Comment: Here is one of the limitations of a talk of this nature. No references are cited at all for either the 200 G or 8000 mph figures. It is a pity this wasn't a written paper with precise citations.

6. "And our US government is engaged at a level that I've never seen before...These are individuals who have constituents..."

Comment: "Individuals who have constituents..." appears to refer to Senators and members of the House of Representatives of the US Congress. This would appear to reinforce the current understanding that members of Congress are actively engaging in a search for information and data.

7. A slide titled "What is happening Now with TTSA? shows a series of 12 images of what appear to be physical "samples" of some kind. Elizondo says "These are actual photographs of material in our possession."

Comment" Several of these images are readily identifiable as images of alleged UAP material, already known about by UAP researchers, e.g. the "Bob White artifact."

8. In the question and answer portion of the presentation, one questioner asks "Can you see the field?" Elizondo responds " We can. In some cases, if we know what to look for we can actually see a distortion around these craft. Surrounded it. We believe its a result of the propulsion system that's being used. In essence, an event horizon is created..."

9. Another questioner asked "When you are talking about highly advanced engineered material, it kind of implies there's an intelligence behind all those phenomena..." Elizondo said "My colleagues and I during the time of AATIP were very confident that there are certainly intelligently controlled. Now whether that means there's something inside it or its something remotely controlled  like a UAV, both are still an option."

Thanks to CUN for hosting this presentation which allows us to gain further insight into the work of To The Stars Academy, and access Elizondo's personal knowledge.

On 27 October 2018, former manager of the Advanced Aerospace Threat Identification Program, Luis Elizondo gave a talk in Rome, Italy, hosted by the Centro Ufologico Nazionale (CUN.) One of his presentation slides was titled "What is happening with TTSA?"

Referring to the slide, Elizondo stated "These are actual photographs of material in our possession." A low resolution photograph of this slide was posted on Face Book, and a number of researchers, including myself, attempted to see if we could identify any of the samples shown on the slide. 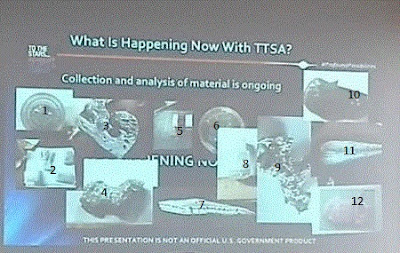 A new, higher resolution image of the slide has now surfaced, thanks to CUN and a lead from Giuliano Marinkovec.  Here is that image: 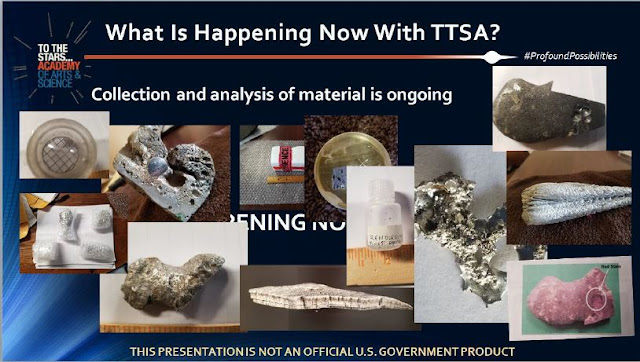 I have separated the 12 images below: 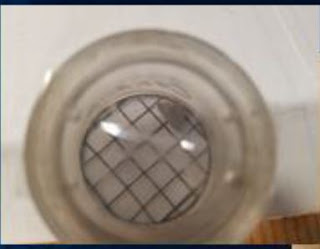 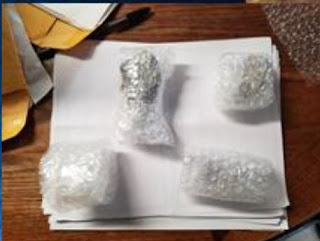 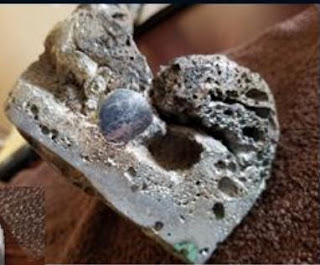 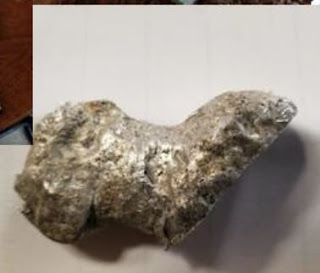 Here is an image which appears to be the same fragment: 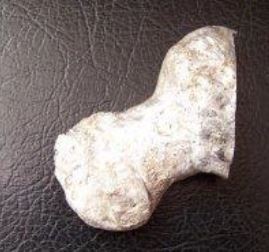 The comparison image comes from a report titled "Two cases of Unusual Sky-Fall Aluminum Metal from Ohio," by N A Reiter and Patricia Mason dated 24 June 2008. It describes the finding in a yard, in early Spring 2003, in Tiffin, Ohio. The fragment has become known as "Ed's" sample. 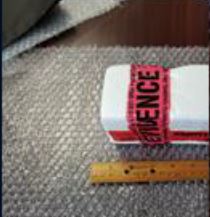 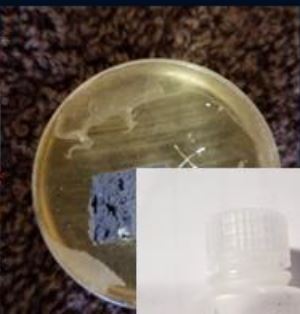 The following comparison image is from Linda Moulton Howe's Earthfiles.

The fragment is said to have come from an anonymous source which stated that the material was from a UFO which crashed between the San Mateo Mountains and Sierra Blanca, West of Roswell, New Mexico, in 1947. Multiple analysis results have been published. 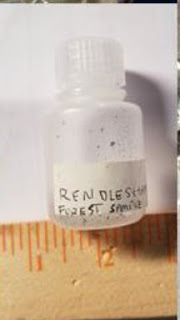 In my catalogue titled "A catalogue of alleged "fragments" reportedly associated with sightings of Unidentified Flying Objects where analysis(es) was conducted," I record details of three samples/fragments from the 1980 Rendlesham Forest, United Kingdom incident. These are:

From the above image it is not possible to say what might be in the container. 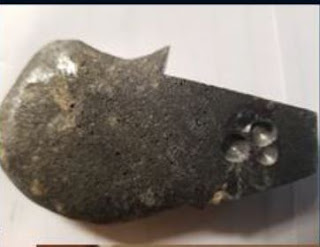 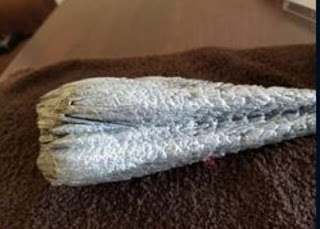 The following comparison image comes from a YouTube video.

The fragment is reported to have fallen off a UFO near the Colorado/Nevada border in either 1985 or 1987. Several analyses have been previously reported upon. 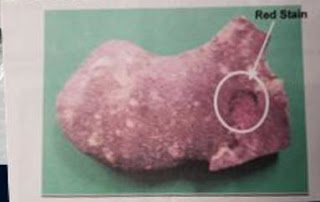 A call for assistance

Can anyone identify the other fragments/samples?
By Keith Basterfield at October 31, 2018