I have been going back through all of the available material I have on file, looking to answer what looks like simple enough questions. Those questions are, when did the program, that we have come to know as AATIP/AAWSAP, start, and what was its initial name?

During a January 2018 radio interview between journalist Giuliano Marinkovic and Luis Elizondo, Elizondo stated that the program commenced in 2007.

George Knapp, during a "Coast to Coast" radio interview with Hal Puthoff on 28 January 2018, stated that the start date was 2007, and Puthoff did not correct him on that date.

In a separate "Coast to Coast" radio interview on 28 February 2018, between Knapp and Elizondo, Elizondo said that his initial discussions about joining the program occurred sometime in 2008. There was no mention of a program start date.

During the 2018 MUFON Symposium talk by Elizondo, he mentioned that the start date was 2007. Indeed, one of his presentation slides showed: 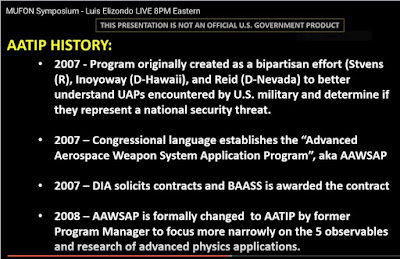 "2007- Program originally created as a bipartisan effort (Stevens (R); Inoyoway (D-Hawaii) and Reid (D-Nevada) to better understand UAPs encountered by US Military and determine if they represented a national security threat

2008 - AAWSAP is formerly changed to AATIP by former program manager to focus more narrowly on the 5 observables and research of advanced physics application."

Does this time frame, i.e. a start date of 2007 fit in with other things we know?

Fact: During his 8 June 2018 speech at the SSE/IRVA conference, when speaking about the AATIP, Hal Puthoff, stated that the program began in June 2007.

Fact: Discussions occurred between  Senator Reid, someone from a US intelligence agency  and Bob Bigelow. [Source: Reid's interview with the New York Magazine on 21 March 2018.]

Speculation: Senator Reid stated that he held discussions with Bob Bigelow about the topic after representations from a scientist in a US intelligence agency (without naming the DIA or any other agency) which is suggestive of this being Dr James T  Lacatski who became the program manager of the AASWAP as set out in the 18 August 2008 DIA solicitation.

Speculation: Bob Bigelow and others, commenced investigating the 2004 Nimitz incident and after discussions between Bigelow and Reid, Bigelow decided to start up BAASS to have an organization ready to go with whatever came next.

Fact: Bigelow employed Douglas Kurth, a marine pilot who was one of the participants in the November 2004 Nimitz encounter. [Source: Kurth's page on LinkedIn states he started with Bigelow Aerospace Advanced Space Studies (BAASS) in December 2007.]

Speculation: This was in preparation for any potential funding which might become available.

Fact: After the closing dates for bids of 5 September 2008, BAASS is awarded the contact. [Source: George Knapp on 4 May 2018, posted a partial shot of a document which appears to show that the successful tenderer was BAASS.)

It does indeed seem correct, that the program commenced in June 2007. However, I still do not know what name the initial program was given.
By Keith Basterfield at October 04, 2018