As part of the Advanced Aerospace Weapon System Applications Program, sub-contractors Dr Hal Puthoff, and Dr Eric W Davis asked a number of individuals to submit papers on projected emerging technologies. 38 such papers were commissioned. Full digital copies of three of these Defense Intelligence Reference Documents (DIRDs) have emerged on the Internet. Before reading further, readers may wish to refresh their memories of the story so far by reading my previous blog post about these DIRDs. 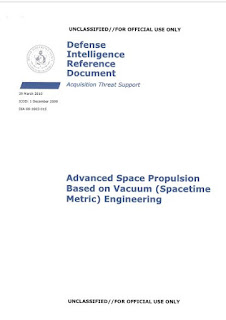 Why bother with these DIRDs?

Why I am bothering with all this DIRD material, when the three which have emerged so far, don't even mention the term UFO or UAP? Well here is my reasoning. According to the former AATIP manager Luis Elizondo, the program came to some conclusions as to the mechanisms by which the phenomenon operates. The data that he and his team had to go on to arrive at these conclusions, were videos; visual observations; instrumented observations; and the opinions of the authors of the DIRDs. Therefore, I feel that by studying all this material, including the DIRDs, we may just get some hints as to what Elizondo can't directly tell us.

In a KLAS-TV news report on 25 July 2018, journalists George Knapp and Matt Adams published a copy of the list of the 38 DIRDs (37 actually, as one was redacted.) Their source of the list was not revealed. Former AATIP manager Luis Elizondo confirmed that the list was genuine.

During a 28 July 2018, interview on the 'UFO Classified' radio show, hosted by Erica Lukes Dr Eric Davis, when talking about the DIRDs said that 'We allowed open domain publishing on the topics of these reports.'

It is already known that an open source publication of Dr Puthoff's 'Advanced Space Propulsion Based on Vacuum (Spacetime Metrics) Engineering' DIRD occurred in the  March 2010 issue of the Journal of the British Interplanetary Society.

Are there any other examples where DIRD authors published the contents of their DIRDs in open sources? So far, my research has located three such examples.

Open source. 'Advanced Deuterium Fusion Propulsion for Manned Deep Space Missions,' Dr. F. Winterberg. Submitted 3 June 2009. Very interestingly, on page 43 of this 44 page PDF appear the words 'In writing this report I acknowledge the encouragement of the following individuals listed in alphabetical order: Robert Bigelow, Stephen Fuelling; Kelvin Long, Harold Puthoff and Harry Ruppe.'  Bigelow and Puthoff need no introduction. Kelvin Long is a physicist and aerospace engineer and is associated with studies of future interstellar flight. I understand Harry Ruppe was a German space travel expert. This all fits very well with this being an open source version of DIRD number 2 on the list. (Thank you to an anonymous comment on my blog which pointed me in this direction.)

Open source. 'Cockpit considerations for Inertial-Affect and FTL Propulsion.' M G Millis. Published 2013, in the Journal of the British Interplanetary Society. The abstract for the paper reads:

'Breakthroughs in propulsion physics (control over gravitational or inertial forces, propellant-less space drives, and faster-than light travel) may not appear imminent, but enough progress has been made to allow thoughtful speculation about their nature and implications. The implications to cockpit design includes added degrees of motion, combination of operational regimes (near ground, orbit and beyond), greater span of speed (from zero-speed hover to beyond light speed), the need for new motion displays and navigational tracking methods, and the loss of familiar motion cues (pilot's inertia and visual clues) due to the separation of external and internal environments. The primary reference used to predict these possibilities is the 2009 book, Frontiers of Propulsion Science. These implications are detailed in terms of design requirements.'(Again, my thanks to an anonymous blog post comment which steered me to this paper.)

Open source. Communication between Dr Baker and myself, led to Dr Baker advising that he had published three papers in 2010 which referred to high frequency gravitational waves. He forwarded me links to all three papers. The one which most closely matches the DIRD was one titled 'Utilization of High-Frequency Gravitational Waves for Aerospace Systems and Technology.'The paper was presented at The Seventh Annual AIAA Southern California Aerospace Systems and Technology (ASAT) Conference on 1 May 2010.

'High-Frequency Gravitational Wave (HFGW) technology has been reported in well over one hundred peer-reviewed scientific journal article over the past five decades. For several years the Peoples Republic of China has funded HFGW research programs involving dozens of their scientists and well known Russian scientists have been involved with HFGW research for over four decades.  Theoretical aerospace, military and civilian applications are communications, surveillance, remote initiation of nuclear events and propulsion, including "moving" space objects and missiles in flight and frustrating anti-missile and anti-satellite systems. This paper presents the historical and theoretical background for the utilization of High-Frequency Gravitational Waves (HFGWs) as an enabling technology for aerospace systems and presents analytical techniques and theoretical quantitative results for the generation, detection and application of HFGWs.'

I am certain that a deeper study will reveal many more examples of open source publication of DIRDs and welcome information from anyone who conducts this additional research. 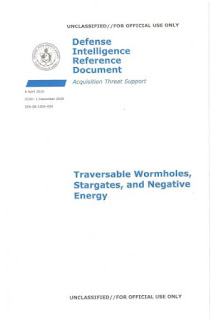 1. I found that the titles of a number of Dr Eric Davis' DIRDs as shown on the list were different from the titles that Davis himself provides on his EarthTech publications website.  For example:

These differences between list, and final publications, led me to wonder if the list wasn't a final version, but some sort of working draft along the way. It certainly isn't a list on DIA letterhead.

An additional clue comes from my communication with Dr Robert Baker who told me that the use of the term 'Gravity Wave Communication' is incorrect. Those working in this field, he told me, refer to 'Gravitiational waves,' which leads me to again think that whoever compiled this list didn't know the correct terminology to use at that time that the list was compiled.

Furthermore, communication with another of the DIRD authors, (DIRDs 6 & 17) Dr Bruce Towe, led him to advise that the citation as to where he works, which in the DIRDs is given as 'Univ of Arizona,' is incorrect as he works at Arizona State University (Phoenix.)

I would be interested to see if anyone can tell us where the 'leaked'copy of the DIRD list, actually came from?

2.We come now, to the subject of 'classified' DIRD titles. In his 28 January 2018 'Coast to Coast' interview with George Knapp, Dr Eric Davis first mentioned that two out of the 38 DIRD's were classified. This was repeated by Davis on the 28 July 2018, Erica Lukes radio show. On this latter show, he went on to say that he couldn't talk about the titles of the two classified DIRDs. Interestingly, he went on to note that on the released list of DIRDs, only one DIRD's details is redacted, whereas the other classified DIRD's details are not. 'That was a mistake,' he said.

I note that neither the titles, nor the names of the authors on the released DIRD list, appear to be in any particular order. They are neither listed alphabetically by title, nor alphabetically by author. Details of DIRD 38 are redacted. Presumably this means that DIRD 38 has either a classified title or is totally classified in respect of all its details.

3. I note that most of the DIRD authors reside in the USA, apart from Dr Ulf Leonhardt (Scotland); George Hathaway (Canada), and Claude Maconne (Italy.)

4. The 2008 AAWSAP solicitation document at attachment one listed ten areas of interest to the program:

Looking at the list of the 37 DIRDs, one can see that Drs Puthoff and Davis, in commissioning the DIRDs were covering all of the ten areas shown above.

I welcome feedback from blog readers on the above analysis. There are probably areas of interest that I have missed. I particularly welcome details of other open source versions of the DIRDs.
By Keith Basterfield at August 01, 2018