Courtesy of a number of individuals, including Isaac Koi in the UK; Andrew Arnold in Melbourne, and Michael Swords in the USA; along with my own resources,  I have been able to bring together a digital collection of 21 issues of the Australian Flying Saucer Review (AFSR.) These 21 issues cover the period December 1959 to December 1972.

There are four distinct eras of the AFSR as far as I can determine.

Volume 1 number 1, dated January 1960 on the front cover (but December 1959 inside), had as co-editors, Peter E Norris of VFSRS and Andrew P Tomas of UFOIC. The introduction states that "This quarterly magazine amalgamates "UFORUM" (Victoria) and "UFO Bulletin" (NSW.)" This first edition, features a transcript of an interview with the Reverend Father William Booth Gill.

Era 2.  From volume 1 number 3, dated September 1960, the AFSR became the publication for not only the VFSRS and UFOIC, but also for the Queensland Flying Saucer Research Bureau (QFSRB.) The three co-editors were Peter E Norris; Andrew P Tomas and Carl Lechman of the QFSRB, and was published under the name of the "UFO Association of Australia." This issue reported upon the July 1957 Katoomba, NSW events which were spread over several nights and involved investigations by the RAAF.

Subsequent issues were published in February 1961; July 1961; January 1962 and November 1962, when as far as I can determine, this collaboration between the three UFO groups ceased, and publication lapsed.

Era 3. The AFSR then became a publication issued by the VFSRS; and then when the VFSRS changed its name to the Victorian UFO Research Society (VUFORS), by that organisation.

Era 4. While the VFSRS/VUFORS published numerous issues of the AFSR (Vic. edition); UFOIC, as far as I can determine published one issue of their NSW version of the AFSR, and that was issue number 9 in 1966; which featured dozens of sighting reports. 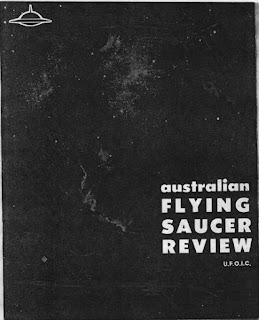 I would be pleased to hear from anyone who may have issues which I do not.


I am working on producing an MS Word table of an index to the known copies of AFSR. I now believe there were 23 issues in total.
By Keith Basterfield at July 29, 2016