In a previous post, I examined "The Producer" (Balaklava) newspaper for relevant articles on UAP. This followed on from the fact that Melbourne researcher Paul Dean, had advised that several new newspapers had been digitised by the National Library of Australia's TROVE scheme.

The only other South Australian newspaper on Paul's list, was "The Victor Harbor Times." Victor Harbor is a seaside tourist/retirement location, some 80 kilometres south of Adelaide.

"The Victor Harbor Times" now been digitised between 1932 and 1986. I therefore used TROVE to locate a number of articles in this newspaper which I summarise, for the historical record.

"Was it a flying saucer?"

"A diary farmer returning home at 9.45pm on July 25 believes he may have seen a flying saucer. He is Mr Arnold Maslin of Hindmarsh Tiers. The object was also seen by Mr Maslin and members of his family the following night.

"Speaking for he husband who is partially deaf, Mrs Maslin said this week that he had described the object as about 30 foot long slightly resembling a new moon on its back, with an orange glow at the centre. It was pointed at one end.

"With Mr Maslin was his 11 year old son George, they climbed from their car and watched the glow for about 10 minutes before it disappeared.

"The next night, Mr and Mrs Maslin; their oldest girl Judith and two other young children saw a large orange light low down in the western sky when they were returning home from the drive in theatre at Port Elliot. It was visible for about a minute as they drove towards the Victor Harbor-Adelaide turnoff and then it disappeared in the direction of Green Hills.

Mrs Maslin said that it was "a terrific size" and too big to be a moving light. I have never seen anything like it before added Mrs Maslin."

"Two young Victor Harbor men believe they sighted an unidentified flying object Tuesday night last week. Daryl Jones and Robert Hook were driving towards Strathalbyn at 10.40pm and when a mile past the native canoe tree saw three bright lights in a triangular formation from about 45 degrees in the sky slowly moving easterly.

"They kept the lights under observation for perhaps two minutes and then more lights appeared until there were thirteen. 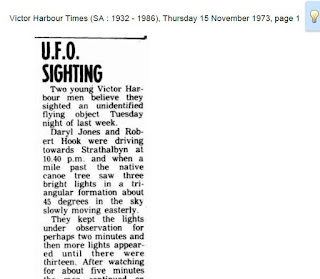 "After watching four or five minutes the men continued on towards Strathalbyn. At the Finnis turnoff six miles from the initial sighting six lights were again sighted.  This time lower in the sky and they seemed to settle in among some trees about a half mile distant. From the roadside the lights were seen by a tree for about five minutes.

"The sightings were reported to police at Strathalbyn and the officer received authority from Adelaide to accompany Messers Jones and Hook to the scene in a police car. When the party arrived, however, the lights had disappeared."

"Two unidentified flying objects were sighted by76 a family, two visiting friends and a police officer near Victor Harbor last Monday night. Mr Neville Dunn  of Maud Street, Encounter Bay, said yesterday that at 8.30pm Monday he and his family and two friends  from Bordertown saw two strange flashing white lights appear from the north-east at about 45 degrees.

"After rising to a higher altitude one of the objects apparently disappeared into cloud. Mr Dun then drove to the nearby home of First Class Constable Max Griffiths in Philip Drive and from there Mr Dunn, Constable Griffiths and Mrs Griffiths saw two separate flashing lights travelling from east to west in the direction of the AMSCOL factory just out from Victor Harbor.

"Mr Dunn said the first two lights seen by his family and friends seemed to come from the direction of AMSCOL about a quarter of a mile apart.

"After leaving Constable Griffiths Mr Dunn did not again see the flashing lights which had been visible altogether for about 20 minutes.

"Did any other readers see flashing lights in the sky, Monday night?
"It has since been verified that an aircraft was in the vicinity of Victor Harbor about 8pm Monday night. The pilot was having radio trouble and was directed to land at Murray Bridge."

"Three Inman Valley people saw what could have been a UFO on Saturday night. They saw the object, described as being like a big aircraft on fire, with a 200 yards of flame behind it, at about 10pm. 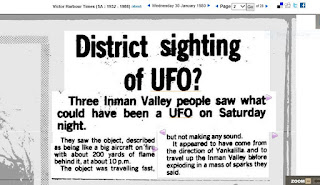 "The object was travelling fast, but not making  any sound. It appeared to have come from the direction of Yankallila and to travel up the Inman Valley before exploding in a mass of sparks as they said."

"A strange light in the southern sky was sighted by a Victor Harbor man in the early hours of Friday. Mrs Meredith Thornton of Bay Road described it as "like a floodlight." It was stationary for about 30 minutes she said. Then it started to move. I was too frightened to watch it any longer. Mrs Thornton said her husband also saw it. She said she would be interested to hear from any other witnesses."

There were sightings across a wide area, including the south-east of South Australia and south-western Victoria, and from Victor Harbor. The time was around midday on Saturday. Various sighting details were collected from witnesses. The object was considered to have been a "fireball" meteor. The best write up can be found here.

"Wayne Trembath had a close shave with the twilight zone recently. Wayne and two friends were interviewed on current and social affair program, Terry Willisie on Tuesday and told of their encounter with a UFO in the far north of Western Australia.

"While on a delivery run, a semi truck and utility were followed by an object for 50 kilometres with the men recording four sightings during four hours. 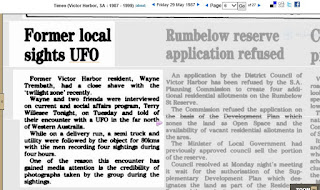 "One of the reasons the encounter has gained media attention is the credibility of photographs taken by the group during the sightings."

"Drivers on the Goolwa to Middleton Road on Sunday night saw an unidentified flying object. The object was seen as a bright light glowing red and green, rising over the hills before moving towards the cars which had parked to watch it. Witnesses said it appeared to be controlled, but could not have been an aircraft as no noise was heard."

There was an outbreak of garbage bag UAP. The Tuesday 12 September 1995 issue (page 3) reported that on Wednesday night (6 September) ten people saw orange lights at about 2030hrs. One person took a video. There was no noise as they flew in from the north-east travelling north. There were four orange lights reported in all.

The 29 September 1995 issue (page 3 revealed that the cause of these sightings had been garbage bags with the headline "UFOs all hot air." Len and Louisa Quick were among those who sighted the lights. Len pointed his spotlight at one of these lights which landed in a nearby lake. An inspection revealed a plastic garbage bag.

The 3 November 1995 edition (page 4) revealed that Freda Jones found  a hot air balloon burning fiercely, on her washing line, on Sunday night. Victor Harbor police called for information from the public about who was launching these bags. 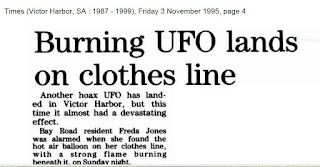 "The Times has received two separate accounts of a UFO over South Coast sites on Tuesday night.

"Mrs Karen Lee of Port Elliot says her ten year old son and nine year old daughter had called her from the kitchen about 7.10pm because they were frightened by an object in the sky. Her son Paul said the UFO was "big, round and red" and after hovering close to their house for a short time, Mrs Lee said "it shot off toward the sea." 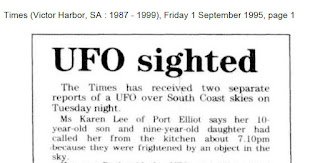 This review of newspaper articles from "The Victor Harbor Times" represents the usual mix of garbage bag balloons; lights in the sky, and the more "classic" flying saucer."

I hope that others, will examine the interstate newspapers on Paul's list and write up what they find.
By Keith Basterfield at November 13, 2015