If you browse the TROVE digitised newspaper collection of the National Library of Australia, using the keywords "1947" and "flying saucer," you will find hundreds of press articles.

However, most of these are non-Australian related; in fact most refer to United States sightings. There are also comments by interested individuals, about this novel phenomenon.

Occasionally, you will, with a lot of effort, find little gems about pre 24 June 1947 Australian sightings. 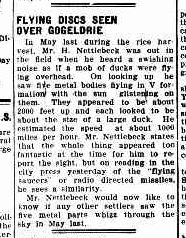 I recently came across one such report, in an obscure Australian regional newspaper, dated Tuesday 8 July 1947. Page two of this edition of "The Murrumbidgee Irrigator" (Leeton, News South Wales, 1915-1954) carries the relevant article. Granted, it wasn't reported until after 24 June 1947, but it is claimed to have happened in May 1947. Here are the details:

"In May last during the rice harvest, Mr H Nettlebeck was out in the field when he heard a swishing noise as if a mob of ducks were flying overhead.

On looking up he saw five metal bodies flying in V formation with the Sun glistening on them. They appeared to be about 2000 feet up and each looked to be about the size of a large duck. He estimated the speed as about 1000 miles per hour.

Mr Nettlebeck states that the whole thing was too fantastic at the time for him to report the sight, but on reading in the City press yesterday of the  "flying saucers" or radar controlled missiles he sees a similarity.

Mr Nettlebeck would like to know if any other settlers saw the five metal parts whizz through the sky in May last."

I do know of at least one other TROVE digitised newspaper account of a pre 24 June 1947 sighting, which was published before that date.

The article appeared in "The Adelaide Advertiser" of 7 February 1947 on page 1. It tells of three railway workers at Port Augusta in South Australia, who reported seeing five egg shaped objects, in formation, pass over in a few seconds, from north to south, casting shadows. The full report appears in a previous post on this blog.

Another witness, to what appears to be the same objects as those observed at Port Augusta,  wrote a letter, which appeared in "The Adelaide Advertiser" dated 17 February 1947 page 2. Here is an image of that letter: 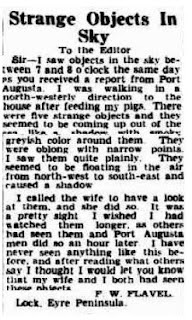 I welcome input from readers who know of any other pre 24 June, 1947 Australian sightings.
By Keith Basterfield at November 15, 2015