At about midday, on Sunday 23 August 1953, Tom Drury, then Deputy Director of the former Australian government Department of Civil Aviation, in Port Moresby, Papua New Guinea, observed and filmed an unusual object in the sky. On various Internet sites, there is discussion that the object made right hand turns.

However, an examination of Drury's official report, e.g. copy on National Archives of Australia file series MP1279/1 control symbol 99/1/478, reveals that Drury described seeing a silver, dart-like object, which shot out of a cloud and climbed very fast to the north-west. There is no mention of right angle turns in this documentation.


Where did the idea of right angle turns come from? 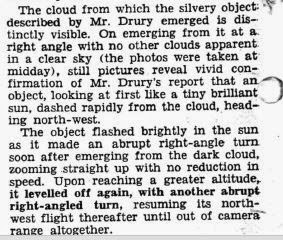 I thought that this 1955 reference was the only pre-Internet source for the belief that the Drury object made right angle turns. However, there are at least two other sources for this.

"A strip of motion picture  containing ninety-four frames corroborates the New Guinea sighting of Rev. W B Gill. This is the so called Port Moresby film...This illustration, drawn from the actual frames of the film, shows a disk shaped object in flight...the object did not decrease speed on ascent and made ninety degree manoeuvres." I reproduce the illustration below. 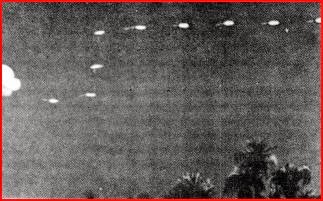 The same claim also appears in the "Australian Flying Saucer Review" of January 1962, where on page 3, there appears a reverse image (left/right) of the January 1960 illustration with a statement:

"Artist's sketch of the flight path of an unknown object - from a 94 frame movie film taken by T C Drury, Deputy Director of Civil Aviation Department in Port Moresby, New Guinea, August 23rd, 1953. The film is still in government hands." 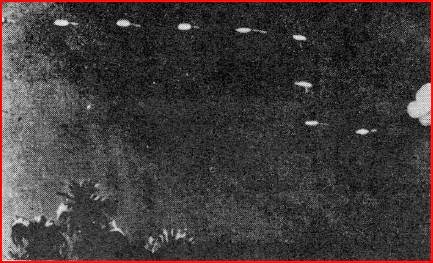 Failure to go back to the original 1953 Drury report, has led to the incorrect conclusion that the object Drury filmed ,made right angle turns.
By Keith Basterfield at October 05, 2014