Westall - read the original documentation yourself

I have become aware, through reading recent comments on social media, that many people, including individuals who were present on site at Westall High School on 6 April 1966, have never had the opportunity to carefully read all of the original documentation which exists on the event.

Certainly, almost no-one has had the opportunity to hear the audio interview between US UAP researcher Professor James E McDonald, and Westall teacher Andrew Greenwood, recorded in Melbourne in June 1967.

I have therefore arranged with John Stepkowski of the Project 1947 website, for that site to host a document which provides the text of all the relevant newspaper articles; UAP magazine articles, plus comprehensive summary notes of the 1967 McDonald/Greenwood interview.

I would ask that, whatever perspective you hold on the Westall event, that you take half an hour to carefully read through this documentation and let the facts contained in it, inform your views.

The material may be viewed at:

I have been challenged by one correspondent to produce any official documents to back up my claim that the Australian Government was concerned at the possible liability which might have arisen from HIBAL program balloons landing in an "inhabited area."

One such document is to be found on National Archives of Australia file series A1838, control symbol 694/7/23 part 2. This file originated with the former Australian government Department of External Affairs. 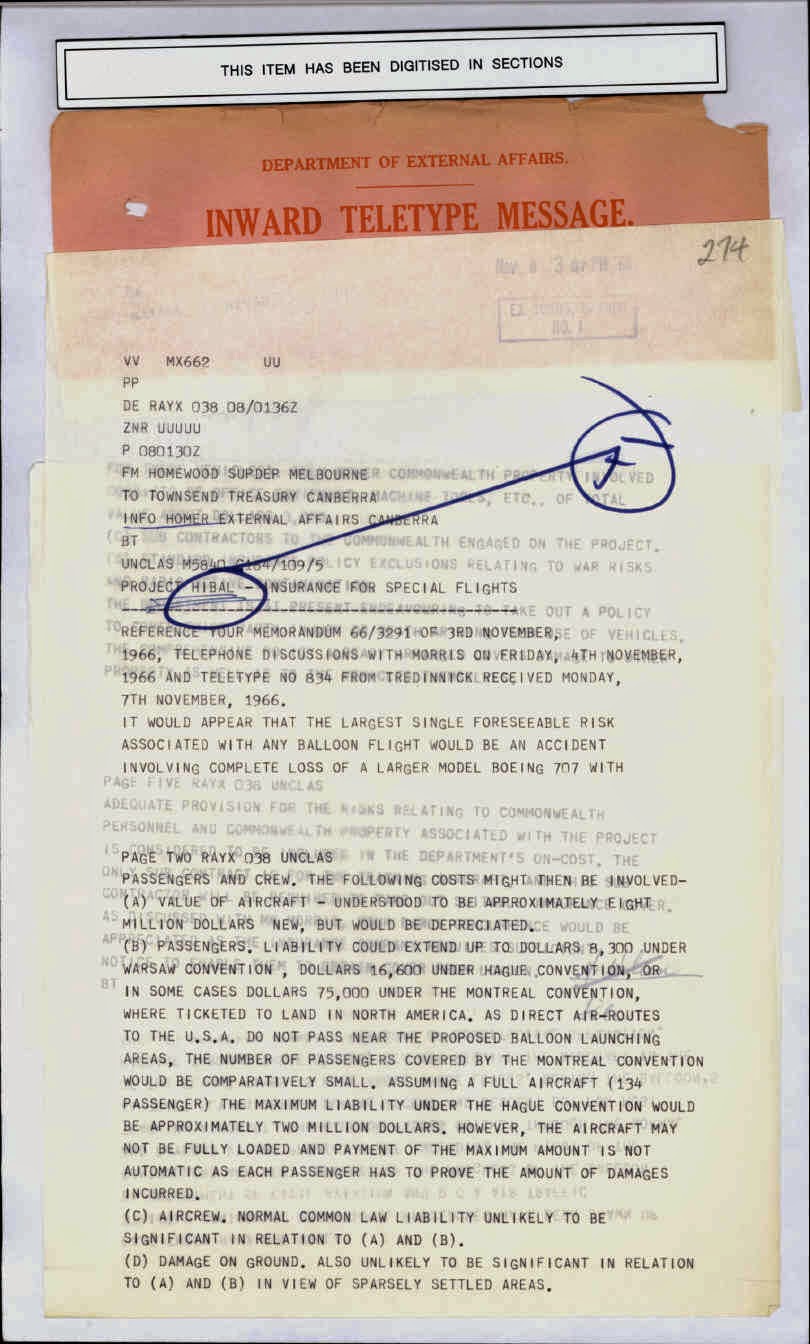 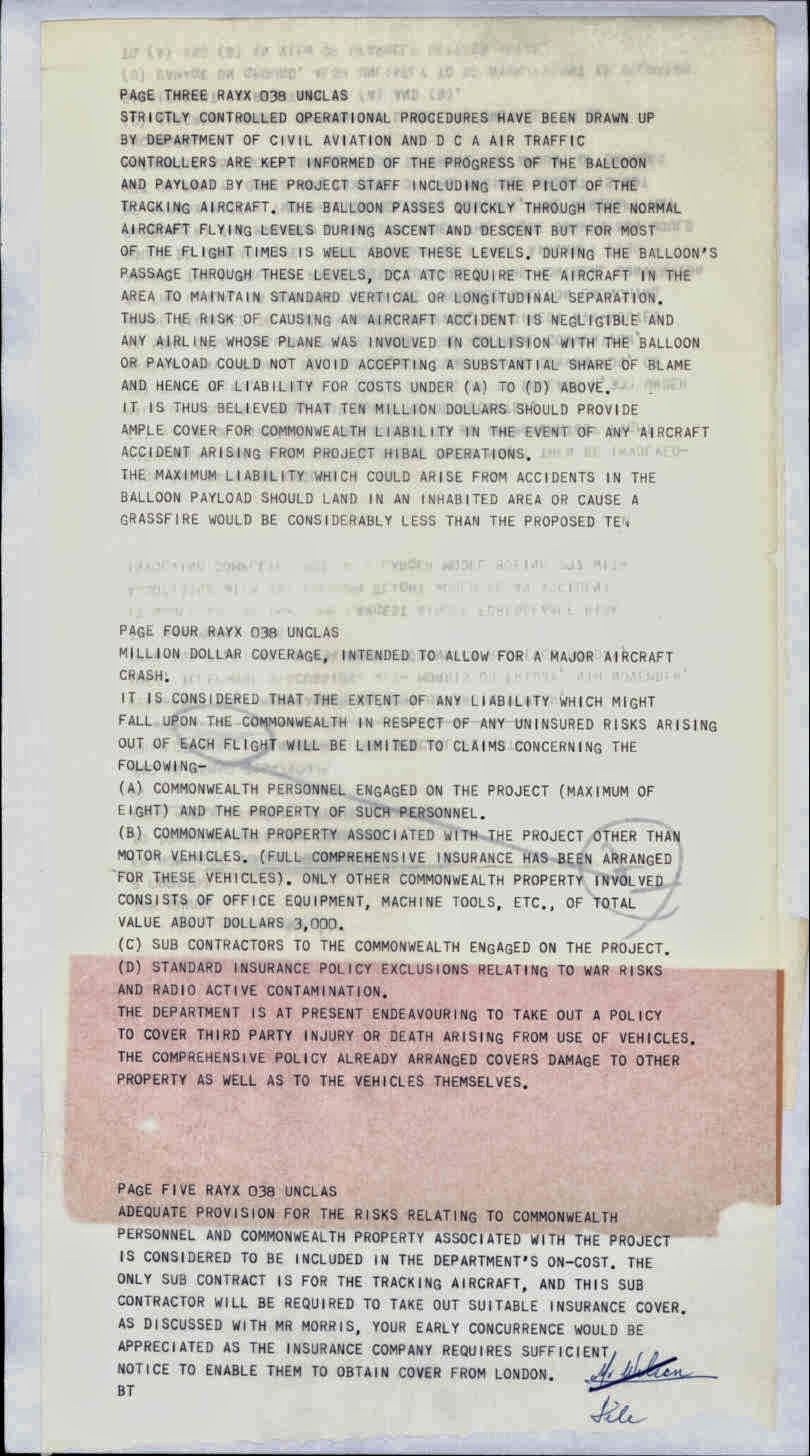 Another correspondent asked me to post an official document which showed that there were other balloons flying from Mildura, which were not part of the US Atomic Energy Commission air sampling program. Again, from the same file series as the two documents above, here is a chart which clearly shows proposed balloon launches in March/April 1966 (remember Westall was 6 April 1966) by the US Government Office of Naval Research/NASA. 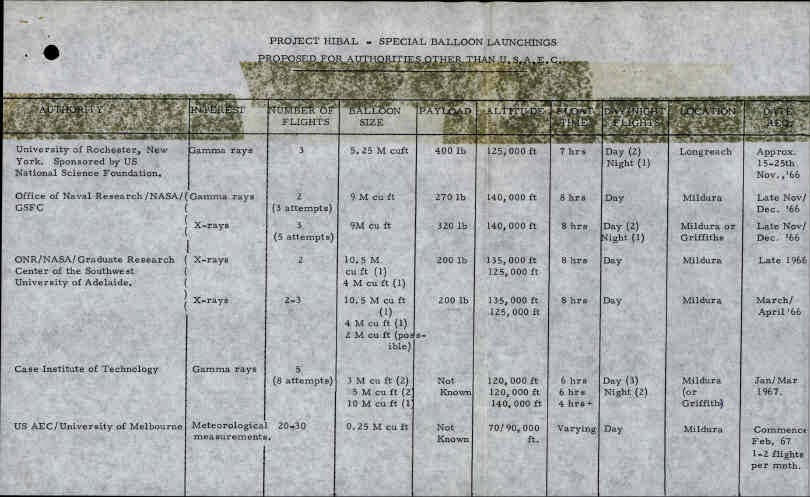 I am conducting further research on these "special balloon launches" to determine if they had any relevance to the Westall incident.

To those who do not favour my line of argument that the authorities knew that the Westall object was coming, because they were tracking the HIBAL balloon, parachute and payload which caused the incident. If it was a "UFO" how did the authorities react so quickly? How did they know that the "UFO" was coming down at Westall? I have never read an explanation of this from any pro-UFO supporter. I would certainly like to hear what they have to say on this point.
By Keith Basterfield at April 24, 2014