Perth near collision - the radar replay

Yesterday (click here), I posted information about the reported near collision between an "unknown object" and an aircraft owned by Skippers Aviation, on 19 March 2014, near Perth. Lying in bed last night, I suddenly realised that the WebTrak system of Air Services Australia (ASA), might contain some information about the event. The Webtrak system (click here) uses information from air traffic control secondary surveillance radars to provide information, overlayed on a map. I therefore went to the ASA WebTrak system for Perth and set it for the 19 March 2014 beginning at 0904hrs WST.

At 0909hrs WST a DH8C aircraft, shown as flying from YKBL (Kambalda, WA) appears on the radar replay, near the locality of Chidlow. This would be the aircraft described in the Australian Transport Safety Bureau's (ATSB) report on the incident.

The DH8C aircraft is shown following flight V0Z1432, registration VH-YIU, a B738, flying Darwin to Perth.

Some 20kms behind the DH8C aircraft was flight QFA485, Melbourne to Perth, an A332 at 6243ft. The crew of this aircraft would have had the DH8C to the front of them.

Close to QFA485 is a general aviation aircraft, a C82R at 8186ft. However the direction of this aircraft was facing away from the DH8C aircraft.

Here is a snip from the actual radar replay. The DH8C aircraft is the one nearest the top of the snip.

Here is a close up view: 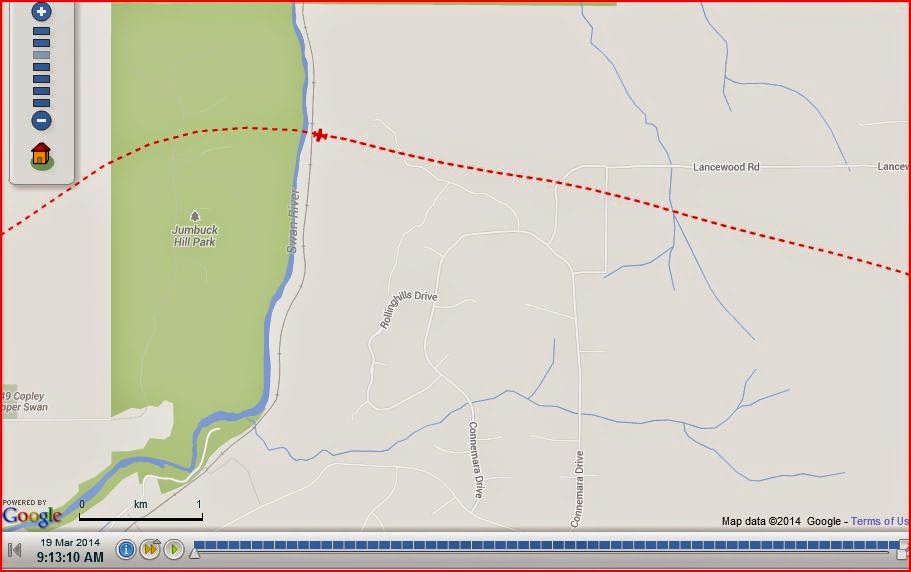 Zooming in on the radar replay reveals that at 0913hrs WST, the DH8C aircraft was at a height of 4124ft.  Looking at the track of this aircraft displayed on the radar replay, there does seem to be a slight direction change at the reported time of the near collision with the "unknown object."

There is absolutely no other aircraft shown near the DH8C aircraft, on the radar replay. However, it should be remembered that the air traffic control secondary surveillance radar only shows objects (aircraft) displaying a transponder which provides identification details to air traffic controllers.

I believe that this is the first time that any researcher has used the ASA WebTrak to confirm details in an ATSB report, concerning a near collision between an "unknown object" and an Australian aircraft.
I would urge readers of this blog to go to the WebTrak website and examine the radar replay for themselves. WebTrak retains radar information for three months, so the plots should be available up until 19 June 2014 for you to take a look for yourselves. Naturally I await the release of the ATSB's report on the incident, which however, will not be available for some months.

Thank you again, to Melbourne based researcher, Paul Dean, for locating preliminary details of the incident on the website of the Australian Transport Safety Bureau.
By Keith Basterfield at April 07, 2014