In the late 1980's, Australia had relatively few people coming forward relating personal accounts of abductions. I can recall interviewing a small number of such individuals during that timeframe. However, within a few years there was an outpouring of such accounts. I kept up with the research being undertaken overseas, and was fortunate to be the sole Australian researcher invited to the 1992 multi-day symposium in Boston, U.S.A. which was co-funded by Prince Hans-Adam of Liechtenstein and Las Vegas' Robert Bigelow. One of the key, and prominent, U.S. abduction researchers was Dr. Rima E. Laibow. The other day, I wondered what had happened to her? A search through the Internet, and various books, including the diaries of Jacques Vallee, provided some answers.

According to author Patrick Huyghe, who interviewed Dr. Laibow for an article for the September 1993 issue of OMNI magazine, the year  1988, was the beginning of Laibow's interest in the topic of alien abductions. A 43 year old patient had come to Laibow, with symptoms of anxiety and panic "...because, out of the corner of her eye she had caught sight of the cover of Communion." She had never read the book itself. The patient told Laibow that she had "...memory fragments of encounters with creatures like those on the book's cover." Laibow diagnosed Post Traumatic Stress Disorder (PTSD,)  but there seemed to be no known trauma involved.

Laibow told Huyghe, that she then read all she could find on the topic of alien abductions, and sought out  advice from U. S. abduction researchers, Budd Hopkins and David Jacobs. After reading; discussions; and thinking about the topic, Laibow said she formed a group in May 1989, "For the Treatment and Research of Experienced Anomalous Trauma (TREAT)" which included rebadging the term "alien abductions" as "Experienced Anomalous Trauma." Her efforts attracted a mainstream doctor, John P. Wilson, an expert in PTSD; and who had a neighbor who had worked with Project Blue Book.

Also in 1988, the October-December "Quarterly report" of the Fund for UFO Research reported: 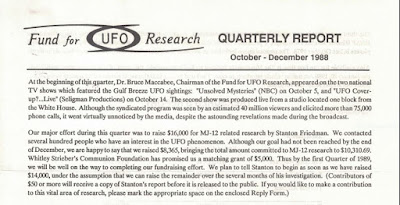 "There are several other projects related to abduction research which have been submitted to the fund. ...Dr. Rima Laibow has proposed an abduction "crisis center" with a hotline for people who are emotionally disturbed over their experiences. Such a center would be staffed with specially trained people and run by a clinical psychologist or psychiatrist. Dr. Laibow also has proposed a conference of clinical psychologists and psychiatrists to review the abduction phenomena..."

The conference TREAT 1, "Treatment and Research of Experienced Anomalous Trauma," was held at Fairfield University in Fairfield, CT.

"He had not attended the meeting on abductions sponsored by Prince Hans-Adam a couple of months ago, but he heard that a woman named Rima Laibow had been put in charge of the group. Unfortunately, she has no training in hypnosis."

"Now I am invited to a conference about "Experienced Anomalous Trauma." A bevy of ufologists with no background in clinical psychology who seem to have become instant experts on trauma will lead the discussions. The organiser is Dr. Rima Laibow, who approaches the subject with a mix of enthusiasm and credulity I find alarming. I declined participation since my views, even if I was allowed to speak, would be unwelcome and probably censored."

"Dr. Rima Laibow, who is organising the latest abduction conference, has told me her concerns about Budd Hopkins. She cited one episode in which Hopkins had hypnotized a woman abductee who didn't quite have the type of Alien experience he was looking for. According to Dr. Laibow he started yelling at her while she was under the trance. This re-awakened some deep trauma for her as a battered child: she is now in psychiatric therapy under real doctors."

The TREAT II conference was held in Blacksburg, Virginia. Clinicians, MDs, physicists and UFO researchers met for five days, in January 1990, by invitation only. The major benefactor of the conference was the Prince of Liechtenstein. A report about the conference, stated that Laibow was formerly a close associate of Budd Hopkins; and that "Laibow is reported to be an abductee," although no evidence is provided to back up that latter statement.

"Dr. Richard Niemtzow called from Texas with his impressions of a meeting on "abduction trauma" presided by psychiatrist Rima Laibow. About 40 people were there, including some physicians like Paul Tyler, but no experts in treating the medical effects of UFOs.

"The group had no idea about methodology," Richard noted. "When someone mentioned they had access to witnesses' blood and urine samples but didn't know where to send them, Rima yelled 'Send me the goo!' implying she'd analyze it."

"It won't do any good to send you the goo," Richard told her, "if you have no baseline to evaluate the results. That's what happened with the French gendarmes, in Cergy-Pontoise."

"Dr. Rima Laibow, current arbiter of alien abduction speculation, came for dinner tonight. She stormed about the bumblings of Budd Hopkins, Leo Sprinkle and the others. She described a video tape in which Sprinkle interrogates Judy Doraty, who originated the idea of underground vats with human parts stirred up by Alien monsters;

"I could swear that it's Sprinkle who is hypnotized," she said. "His head is lowered, he speaks in a low, dreamy tone. The woman is all business, vivacious, talkative. At one point she seems ready to cry, then she opens her eyes wide, takes a handkerchief and runs it carefully over her eyelids to see if her mascara is running...Is that deep hypnosis? I've done hundreds of sessions in therapy and I've yet to see my patient check her make-up."

Rima believes there are "cult multiples," people who have developed artificial multiple personalities or were given certain wackinesses, that can be controlled throughout their lives. It's an important idea."

"Rima Laibow told me a surprising anecdote. At the dinner following the first Abduction Trauma meeting, the Prince reportedly said that he'd been briefed by the KGB, the CIA and NATO Intelligence. They told him people were "taken" from every country."

The conference, TREAT III was held in Kansas City, between 7-10 March 1991 and arranged by Laibow. The Proceedings were edited by Rima Laibow and Robert. N. Sollod.

"Rima Laibow is looking for someone to head up a new research project on UFOs. Rumour has it that the money comes from Scott Jones, who has obtained some $300,000 from Rockefeller and the Claiborne Pell Foundation. I declined, the context isn't right."

Laibow attended an event where Kiev based psychiatrist and healer Anatoly Kashperovsky "performed." Laibow stated that "...this cesarean scar that I had, which was thick and ropey and very prominent...began to tingle." As soon as she could, she inspected the scar, and said that it had gone. She said, that inspection by her gyneocologist found only a very fine, hairline, scar present.

The TREAT IV conference, took place between 9-12 April 1992, held in Decatur, Ga. By this time, topics for discussion included crop circles, remote viewing, as well as alien abductions. A report in the Baltimore Sun newspaper, said that the conference was organized by Dr. Rima Laibow. It reported that there were 75 participants.

Laibow, Rima E., Sollod, Robert N. & Wilson, John P. (eds) "Anomalous Experience & Trauma: Current Theoretical, Research and Clinical Perspectives" was the title of a publication of the Center for Treatment and Research of Experienced Anomalous Trauma, Dobbs Ferry, New York. The 320 pages were split into three sections; namely, theoretical and conceptual issues; research evidence and issue of method; and clinical intervention and approaches to treatment. The papers were by a mix of clinicians and UFO researchers.

"Gueymard told us a funny anecdote about General Stubblebine and Rima Laibow who came to France recently. Pierre didn't tell her much. She rushed through a hypnotic session with him because she had to go out and buy black garter belts: "The General likes it!"

The TREAT V conference, was also held in Decatur. Ga.

Laibow co-authored a chapter in a book about Traumatic Stress Syndromes. The chapter abstract read:

"Experienced Anomalous Trauma (EAT) is seen in patients exhibiting signs of stress-response trauma in the absence of a readily identifiable traumatic event despite careful investigation.

Posttraumatic stress disorder (PTSD) is frequent in these patients. Such persons are generally free of major psychopathology and may show physical and emotional traumatic sequalae.

Prior to treatment, memory like trances may or may not be present for scenario which correlate with the psychological and physical stigmata of the stressful event. As will be discussed in this chapter, EAT may be seen in patients in any ethnic and/or demographic cohort. As noted elsewhere in this volume, PTSD was first described in the context of battle fatigue although it may be present in a wide variety of clinical guises."

According to her CV, published in 2004, between 1994 and 2002, Laibow co-authored a number of scientific papers with N. Bounias; A Stubblebine; H. Sanderound and M. Bonaly, concerning their research on the topic of biofeedback. An example may be found here. In 1998, Laibow, Stubblebine and Bounias published a paper titled "From Lethality to Neuropsychotoxicology: A Major Paradigm Shift in Toxicology", in J. Environ. Biol. 19(3):221-229.

A CV posted in 2004 reveals that Laibow was born on 30 September 1943; earned a BA (Eng. Lit.) in 1965; and became an M.D. in 1970. She had been in private practice since 1972 and specialized in both adult; and child and adolescent psychiatry. She has authored/co-authored a number of scientific papers on such topics as biofeedback; and autistic prodigies.

A Digital Versitile Disk was released titled "UFO Abductions and the Government cover up" featuring interviews with Dr. Laibow and C.B. Scott Jones.

With the outbreak of Ebola disease in West Africa, came a number of claimed "cures" for this disease. One of the products "Nano-Silver," was being sold by Dr. Laibow.

"The American doctor- who said she has a cure for the Ebola virus disease and whose treatment is now made available to Nigeria by an unnamed donor - has been campaigning against the "conspiracy" of conventional drug makers." The doctor was Rima Laibow.

Following the death of her husband in 2017; Laibow filed a claim, which included allegations of negligence, against a number of medical practitioners and institutions. The claims were dismissed in November 2019 and January 2020.

In an online article dated 13 November 2020, it was announced that the U.S. Department of Justice, had filed a suit "to halt the sale by a New Jersey entity of an unapproved 'nano silver' product previously touted as a COVID-19 treatment."