There have been recent media items concerning statements made by former Central Intelligence Agency (CIA) Director John. O. Brennan, who was head of that agency for four years during the Obama administration. Journalist Giuliano Marinkovic reminded us that U.S. journalist Billy Cox first published a story about Brennan's views on UFOs, back in 2018. It should also be noted, that in 2013, Cox also obtained a comment about UFOs from former CIA Director Robert Gates.

Howver, while searching the Internet about Brennan's views, I came across a very similar story in the New York Times, dated 28 February 1960. Yes, in 1960. It appeared on page 30 of that day's edition. To show that things often occur in cycles, however long the cycle, I will cite the entire article below.

WASHINGTON, Feb.27 (UPI.) The Air Force has sent its commands a warning to treat sightings of Unidentified Flying Objects as "Serious Business" directly related to the nation's defense, it was learned today.

An Air Force spokseman confirmed issuance of the directive after portions of it were made public by a private "flying saucer" group. The new regulations were issued by the Air Force inspector general Dec. 24.

The regulations, revising similar ones issued in the past, outlined procedures and said that "investigations and analysis of UFOs are directly related to the Air Force's responsibility for the defense of the United States.

Existence of the document was released by the National Investigations Committee on Aerial Phenomena. The privately financed committeee accused the Air Force of deception in publicly describing reports of UFOs as delusions and hoaxes while sending the private admonition to its commands.

Vice Admiral R.H. Hillenkotter (Ret.) a committee board member and a former Director of the Central lntelligence Agency, said in a statement, that a copy of the inspector general's warning had been sent to the Senate 'Science and Astronautics' Committee.

"It is time for the truth to be brought out in open Congressional hearings," he said.

The Air Force confirmed that the document had been issued. A spokesman said it was put out by Maj. Gen. Richard E. O'Keefe, acting inspector general at the time, to call attention to revised Air Force regulations concerning Unidentified Flying Objects.

The statement was included in an "operations and training" pamplet  put out at intervals to bring command up to date.

Pentagon aides said the new regulations covering seven printed pages, made no substantive change in policy, but had been re-written as a matter of course.

The Air Force had investigated 6,132 reports of flying objects since 1947, including 193 in the last six months of 1959.The latest Air Force statement issued a month ago, said "no physical or material evidence, not even a minute fragment of a so called flying saucer has ever been found."

Admiral Hillenkotter said that "behind the scenes, high-ranking Air Force officers are soberly concerned about the UFOs."

"But through official secrecy and ridcule many citizens are led to believe the unknown flying objects are nonsense," the retired Admiral said. He charged that "to hide the facts , the Air Force has silenced its personnel through the issuance of a regulation." 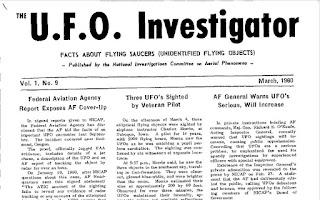 I looked up digitized issues of NICAP's "The UFO Investigator," and found that the Volume 1 Number 9 issue, dated March 1960, carried a front page account of the above story. It confirmed that NICAP released photocopies of the document to United Press International and Associated Press. The document itself, was dated 24 December 1959 , and was headed "UFOs SERIOUS BUSINESS." The UFO Investigator article carried selected quotes from the document.

NICAP sent a copy of the document to Senator Lyndon Johnson, Chairman of the Senate Science and Astronautics Committee. Other copies were sent to additional Senate, and House Committees. Later, when President, Lyndon Johnson arranged for a "secret" UFO study to be undertaken. For details, click here.