A history of, and some comments about, a purported UAP photograph

On 3 December 2020, an article appeared on thedebrief.org written by Tim McMillan, a German based, United States (U.S.)  citizen. Accompanying the article was a photograph of a purported UAP, said to have been taken from a U.S. military aircraft.

The photograph was reportedly taken in the air by a weapon systems operator in an F/A-18 military jet aircraft, somewhere off the East coast of the U.S. McMillan reported having been told that the photograph had appeared in a 2018 intelligence report issued by the U.S. UAP Task Force. (UAPTF.) The object was said to have been hovering motionless over the ocean. A close-up of the object of interest was also given.

Discussion on the Internet, centered around the possibility of the object being a balloon of some kind. However, it is not the intention of this blog post to engage in a debate as to the identity of the object, other than to say that analyis by a well-known U.S. researcher indicated the object had an apparent angular size of about 0.4 degrees, hence being about seven feet in size, if at a distance of 1,000 feet. Smaller than seven feet if closer; or bigger than seven feet if more distant than 1,000 feet.

A check, by me, of the metadata of the image shown by McMillan, indicated that this particular image was created on 4/03/2019, and  not in 2018. I reached out to McMillan to point this out, and he advised that his understanding was that the image shown was a re-photograph of the original photograph. In other words the metadata attached to the published photograph was not the original metadata.
A number of commentators on the Internet, have expressed opinions, based on the image's metadata, that it it is most likely not a photo of a photo; for example:

In addition, Twitter user Joel @uapresearch  published an article  on 6 December 2020 which set out a range of arguments for the image not being a re-photograph of a photograph.
Mystery Wire
In an article, dated 3 December 2020, author Duncan Phenix reported that in 2019, Mystery Wire had received a copy of the same cockpit photograph showing the same object,  Mystery Wire stated that they were told that the photograph was taken in 2018, by a Navy pilot using his cell phone. A search of the Internet reveals no evidence that Mystery Wire published, or indeed, commented on that photograph at that time, or in fact, until 3 December 2020. I emailed Phenix to ask if the photograph they received had any associated metadata, but have, as yet, received no response.
Blake S. Taylor
On 4 December 2020, Twitter user @YoungGun8140, Blake S. Taylor, advised that he had shared photos with UFO Twitter some months ago. A check of a 12 May 2020 tweet of his, revealed three photographs, one of which was the image published by McMillan. The image had no associated metadata details. I, and numerous others inquired of Taylor as to when he had initially come across the photograph?
In a tweet, dated 5 December 2020, Taylor stated:

"I'm pretty sure I found it whilst rummaging around in one of those sites where we find government documents etc. I have been trying to remember. It's been a while. I just remember seeing it, saving it and sharing it." 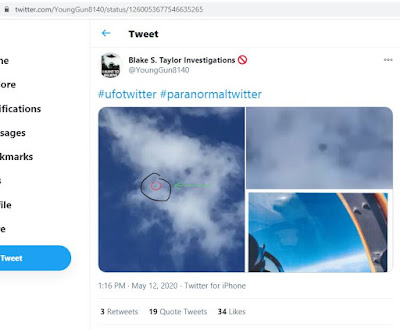 How long ago did the UAP community know of this photograph?
The question then  arises as to how long this particular image has been circulating in the UAP community? Joel @uapresearch told me:

No doubt, there will be much more to be said about this photograph.

On 7 December 2020, the Mystery Wire article was updated, as follows:

(Correction note from George Knapp: In the summer of 2019, Mystery Wire did obtain a copy of   photo, taken by a Navy pilot from inside the cockpit of an F-18. However, the photo we received does not show the same object that appears in the images released last week. The source who shared the photo with us did so under the condition that we not release it to the public.)

Swedish researcher Roger Glassel speculated that part of the reflection on the cockpit window was due to it being a reflection of the pilot's helmet. He reviewed a number of YouTube videos of military aircraft. In a tweet on 9 December 2020, he stated that the helmet showed that the aircraft in the photograph belonged to Strike Squadon VFA-32. Between June and December 2016 VFA-32 was deployed to the Middle East aboard the USS Dwight. D. Eisnehower. Their home base is shown as  Naval Air Station Oceana, Virginia Beach, Virginia.

Twitter user Blake S. Taylor has been trying to recall where he sighted the photo, in May 2020. In a tweet on 9 December 2020 he wrote:

"...what I do remember is it was a site similar to this https://www.nsa.gov/news-features/declassified-documents/ufo/ "

...again it may not be within that site but something very similar in construct..."

"This shouldn't be this tough to figure out. I responded to this tweet "We want that triangle pic, we know you have it."

I do not have the triangle pic. nor have I seen it. I have different photo. The photo I have does not show a triangle. Get it?"

"The Debrief has become aware that the leaked image is one of a series of photographs captured over a period of 32 minutes by Naval aviators. The Debrief has also confirmed the photos were provided to and analyzed by the Pentagon's UAP Task Force, being run by the Office of Naval intelligence."

In a Mystery Wire article, Journalist George Knapp  reveals details of three photographs taken from a U.S. Navy jet on 4 March 2019. These are:

2. At 3.02pm. A photograph of an object referred to as the "Acorn." This shaped object featured in the original Debrief article above.