Is the US Office of Naval Intelligence now part of the AATIP effort?

When Elizondo resigned from  the Department of Defense, in October 2017 he signed his resignation letter "Luis D Elizondo, Director, National Program Special Management Staff, OUSD(I)." So, we know that AATIP then lay within the Office of the Undersecretary of Defense for Intelligence. What other offices might now be involved in the AATIP? Do we have any clues? I think we do.

Back on the 23 April 2019, journalist Bryan bender wrote a POLITICO article titled "US Navy drafts new guidelines for reporting UFOs." The US Navy, stated to POLITICO:

"In response to requests for information from Congressional members and staff, Navy officials have provided a series of briefings by senior Naval Intelligence officials..."

So, in my opinion, one of the offices, other than OUSDI, could well lie within the US Navy. After all, it has been naval aviators who have been reporting incidents since 2004, and more recently in 2014/2015. Elizondo himself, has said that after AATIP was officially defunded in 2012, that the effort carried on with the assistance of other agencies. One which, he specifically mentioned, was the US Navy.

Could the "guidelines" mentioned above, provide us with a lead? US researcher John Greenewald sought copies of both the 2015 "guidelines" and the re-issued (not new) 2019 "guidelines;" issued by the US Navy, to its fleet.

Initially, Greenewald tried the US Navy's public affairs office. Their response on the 26 April 2019 was:

"We are unable to share the message with you. Due to the operational and aircraft specific nature of these guidelines, security considerations preclude their disclosure."

Greenewald then used the FOIA. A letter, dated 28 June 2019, from the Office of the Chief of Naval Operations, Washington, set out the Navy's response:

"OPNAV N2/N6 has identified 1 classified record that is responsive to your request...all portions are exempt from release under the FOIA..."

In short, there is no lead here at the moment.

The Office of Naval Intelligence

"In February 2013 joint testimony before  the House Committee on Armed Services, the Under Secretary of Defense for Intelligence (USD[I],) and Director of the DIA identified naval intelligence as consisting of three organizations; ONI, the Fleet Intelligence Office, and the Naval Criminal Investigation Service (NCIS.)" (Page 134.)

I went through Richelson's book, looking for the most likely locations within the ONI which might have an interest in emerging technologies; future capabilities, and unmanned aerial vehicles. I found that:

"The technical analysis center is responsible for providing analyses of foreign navies, platforms and weapons, strategic assessment of foreign future capabilities..." (page 137) and:

"The Office of Strategic Assessments is responsible for "projecting the future environment...and characterize foreign efforts that could put U.S. Naval forces at risk..." (pp137-138) and:

"The Naval Platforms Department is responsible for the study of all surface ships...unmanned aerial vehicles..." (p139.)

Earlier editions of "The US Intelligence Community" contained similar statements.

Without additional information, it is not possible to take this line of inquiry any further. Are any blog readers able to add to this?

Thank you to Australian researcher Paul Dean, for his assistance with sourcing material relating to the US Office of Naval Intelligence.

I had a recollection that I had seen a reference where Elizondo mentions two other agencies he worked with while with AATIP. I finally found one such reference:

"...Elizondo disputed the official story that the program ended when the funding ceased in 2012. He told the New York Times that only the funding ended, but he continued to work with Navy and CIA officials out of his Pentagon office until he resigned on October 4..."

"In the final episode of Unidentified they show 3 men (from afar) who were said to be Elizondo's successors. I don't know if it means anything but one was wearing green military fatigues."

I had, in fact noted the same thing, that one of the three men wore military camouflage clothing, while the other two seemed to be in suits.

Below are screen shots from Episode 6 of "Unidentified." 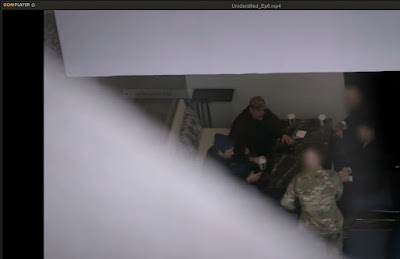 Can any blog readers identify which branch of the US military wears such a uniform?
By Keith Basterfield at July 09, 2019