Another excellent article, about US Navy aviators, and Unidentified Aerial Phenomena has appeared in the 26 May 2019 edition of the New York Times. Again written by the New York Times Pentagon correspondent, Helene Cooper; the New York Times' Ralph Blumenthal; and author and researcher Leslie Kean, it is headlined 'Wow, what is that?' Navy Pilots Report Unexplained Flying Objects.

The article is based on interview which the authors conducted with five US Navy pilots, who discuss sightings from the years 2014 and 2015. This was during Naval exercises, off the US East coast, off the states of Florida and Virginia.

Now, we already know some details of some of these sightings, as they have been mentioned by various commentators, over the last year or so. Plus, two videos taken in 2015, namely called "Gimbal" and "Go Fast," have been posted on the website of the To The Stars Academy. However, the New York Times article adds pilot names and additional information.

The purpose of this blog post, is to highlight some of this information. I will quote from the article and then add my personal comments, which hopefully will be useful to blog readers' understanding.


Frequency of sightings and speeds

"Navy pilots reported to their superiors that the objects had no visible engine or infrared exhaust plumes, but that they could reach 30,000 feet and hypersonic speeds."

Comment: The 2004 "Tic-Tac" object was reportedly travelling at hypersonic velocities at time. Note, though, that the NYT at this point, doesn't mention the shape of the objects.

"These things would be out there all day..."

Comment: Does this imply 24 hours a day, i.e. also at night?

One of the pilots, Lieutenant Ryan Graves "...reported his sightings to the Pentagon and Congress."

Comment: Here, yet again, is mention that pilots were discussing the matter with a part of Congress, likely to have been the Senate Armed Services Committee.

"In late 2014, a Super Hornet pilot had a near collision with one of the objects and an official mishap report was filed."

Comment: There is more detail about this near collision later in the article. Does this mean that we might obtain a copy of the mishap report via the FOIA?

"But the objects had gotten the attention of the Navy, which earlier this year sent out new classified guidelines for how to report what the military called unexplained aerial phenomena, or unidentified flying objects."

Comment: Note that the recent Pentagon statement to the New York Post confirmed that the AATIP did investigate "Unidentified Aerial Phenomena."


Date of one of the videos

"Videos filmed by Navy pilots show two encounters with flying objects. One was captured by the plane's camera off the coast of Jacksonville, Fla., on Jan 20, 2015...the second video was taken a few weeks later."

1. An analysis by myself and French researcher Christopher Spitzer, arrived at a date of 26 January 2015 for the "Gimbal" video based on audio commentary on the video which spoke of winds "from the west of 120 knots" at 7260 metres height. This date was based on upper atmospheric observations recorded on 26 January 2015, and the restricted movement of civilian aircraft traffic around Naval exercise areas. 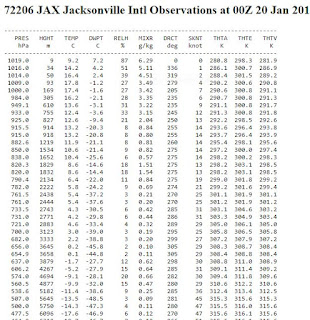 I also checked the data for 1200 hours zulu 20 January 2015 for Jacksonville. Again the maximum wind velocity from ground to 33,223 metres was 95 knots. At both times the wind was roughly from the west at most altitudes.

2. A few UFO researchers have insisted that the "Gimbal" and "Go Fast" videos were taken on the same day. However, here the NYT says "Go Fast" was taken a few weeks later.

"Joseph Gradisher, a Navy spokesman, said the new guideline was an update of instructions that went out to the fleet in 2015, after the Roosevelt incidents."

Comment: We had not previously known that US Navy fleet instructions had been issued after the Roosevelt incidents.

"The sightings were reported " to AATIP "which analyzed the radar data, video footage and accounts provided by senior officers from the Roosevelt."

Comment: Former AATIP program manager Luis Elizondo hinted about such analyses, but so far no-one has been able to obtain the full data.


Details of some of the observations emerge

"Lieutenant Graves still cannot explain what he saw. In the summer of 2014, he and Lt Danny Accoin, another Super Hornet pilot, were part of a squadron, the VFA-11 'Red Rippers' out of Naval Air Station Oceana, Fla..."

Comment: Previously, we had not known the names of any of the 2015 incident pilots.

"The pilots began noticing the objects after their 1980's-era radar was upgraded to a more advanced system. As one fighter pilot after another got the new radar, pilots began picking up the objects, but ignoring what they thought were false radar returns."

Comment: I guess it was logical, at that time, to suspect the new radar was misbehaving.

"Lieutenant Accoin said he interacted twice with the objects. The first time after picking up the object on radar, he set his plane to merge with it, flying 1,000 feet below it. He said he should have been able to see it in his helmet camera, but could not, even though his radar told him it was there."

"A few days later, Lieutenant Accoin said a training missile on his jet locked on the object and his infrared camera picked it up as well. 'I know I had it. I know it was not a false hit,' he said. But still, 'I could not pick it up visually."

The pilots speculated that "...the objects were part of some classified and extremely advanced drone program."

Comment: Why would the US, if they had such a program, operate it in restricted air space, endangering US Navy pilots?


More on that near miss

"In late 2014, Lieutenant Graves said he was back at base in Virginia Beach when he encountered a squadron mate just back from a mission, 'with a look of shock on his face.' He said he was stunned to hear the pilot's words. 'I almost hit one of those things...The pilot and his wingman were flying in tandem about 100 feet apart over the Atlantic east of Virginia Beach when something flew between them, right past the cockpit. It looked to the pilot, Lieutenant Graves said,like a sphere encasing a cube...an aviation flight safety report was filed..."

"What was strange, the pilot said, was that the video showed objects accelerating to hypersonic speed, making sudden stops and instantaneous turns..."

Comment: Are they here referring to the "Gimbal" and "Go Fast" videos or other videos?

A very interesting, and historical article, from the New York Times. More data to be added to that which we already have. However, of course, we would all like to take a look at, and analyse for ourselves, the radar data; the infra-red data; the full length videos, and have an opportunity to see the original log book observations of the pilots involved. Not that I am doubting their words; just frustrated at the inability to do some proper analysis myself, and not rely on the NYT's interpretation; however accurate their summary is. They are, after all, journalists, and not analysts.
By Keith Basterfield at May 27, 2019