From time to time, documentation turns up "out of the blue," which assists us with aspects of the subject. Although we may have known or suspected the existence of such documents, when they turn up in this manner, it is very much unexpected.  Three recent examples come to mind.

In late 2013, UFO researcher Rob Mercer, who lives in Springfield, Ohio, came across an advert offering Project Blue Book documents. It turned out that a former USAF officer, assigned to Project Blue Book, named Lt Carmon Marano, had kept some material. Mercer eventually located Marano and then spoke to him. Ultimately, Mercer was able to obtain boxes of files; photographs; films and documents. Some of this was the original material, some copies. Mercer has now made scans of this material available.

In July 2018, an announcement was made that the family of the late Major Jesse Marcel, of Roswell fame, had gathered together "...historical documents, military records, photos and a personal journal" of the former Intelligence Officer. This material is now being processed before being publicly revealed. Whether or not it will provide some corroboration of details already know is yet to be determined. However, without the family's efforts this new material would not have become available for UFO researchers.

Over several years, the UK government has released thousands of pages of documents relating to the British government's investigation into UFOs in that country. However, though the efforts of US researcher, and Rendlesham Forest 1980 incident witness, John Burroughs, more was revealed.

"Burroughs has submitted several Freedom of Information Act Requests in the UK and US. He has already been able to get the UK government to admit that they have more UFO files to release, even though they had previously claimed to have released all of the UFO files."

This ultimately led to the release of 15 such files in 2017. These 2017 files contained for example, information on the UFO interests of the Italian Department of Defence; a 1982 observation from a USAF spy flight; UK Defence Intelligence thinking; and more on the 1990 UK Tornado jet incident.

In 2018, three more such files emerged and these are currently under study by UFO researchers. To take a look at Dr David Clarke's analysis of these three files, click here.


What of Australian documents?

In 2015, I wrote a blog post about UAP sightings in Papua New Guinea, which had been an administered external territory of Australia between 1949 and 1975. The post advised that I had found UAP sightings on a number of files which belonged to the Department of the Army; the Department of Civil Aviation; the CSIRO; and the RAAF. The contents of some of the documents on these files were previously unknown.

Also in 2015, research by Dr Stuart Hatch revealed the, until then, unknown existence of a file belonging to the Western Australian police force, detailing many UAP sightings that were either reported to them or via the RAAF. This turned out to by only a partial copy of the file. Further research by myself, located the full version of the file, which I discussed in this post.

Moving on now, to sets of documents which have been around for decades, but which, today, are little known.

US UFO researcher Larry Bryant submitted an FOIA request to the Office of the Secretary, USAF, in late 1987/early 1988 for copies of Richard C Doty's USAF service records. In October 1988, Bryant received some records. At around the same time Bryant also obtained further Doty service records, again under the FOIA, from the 1606th Air Base Wing. A limited number of people ever saw these records. 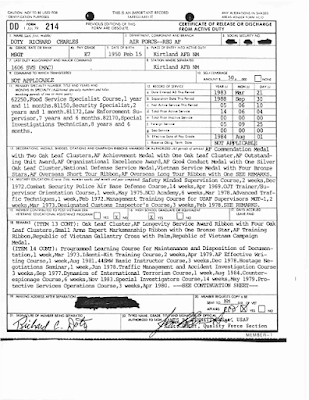 In mid 2018, Melbourne based researcher Paul Dean acquired a copy of these 25 pages of Doty's USAF service records, and on 13 June 2018 published a blog post about them , which provided images of all 25 pages.

I reported above, that members of the Marcel family have recently brought together family held records relating to Jesse A Marcel. These include some of his military records.

However, what it little known, is that way back in the 1990's,  the late US researcher Robert Todd acquired some 200 pages of Marcel's service records. In the 8 December 1995 (Vol 1 No 3) issue of "The KowPflop Quarterly" he described the contents of the records, and compared and contrasted them to the facts about Marcel, presented elsewhere in the UFO literature. On 20 December 1996 in "The Spot Report" (Issue 6 of the Cowflop series) Todd described the process by which he obtained the records. 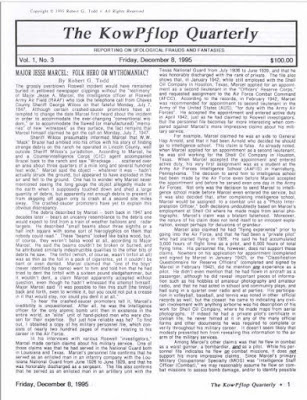 Other sources have discussed the contents of Marcel's military records, with acknowledgement of Todd's work.

Disclosure Australia, a project which ran between 2003 and 2008, was aimed at examining UAP files originating by a number of Australian government agencies; using both the Archive Act and the Freedom of Information Act. The project's Newsletter Archive reveals numerous examples of material which was long lost to civilian researchers.

Later work by this author, located such fascinating documents as a file full of material between 1974 and 1996 originating with the Defense Science Technology Organisation. I documented the contents of this previously unknown file here, here, and here.

You just never know when documents from the past, will reemerge.
By Keith Basterfield at July 16, 2018