In a blog post dated 2 June 2018, I wrote about a number of DIRDs which had been prepared for the Defense Intelligence Agency (DIA) under their Advanced Aerospace Weapon System Applications (AAWSA) program.

Various individuals, commissioned under an AAWSA sub-contract to the Institute of Advanced Studies, based in Austin, Texas, were asked to look into the future, in a variety of areas, and write a DIRD on their specialty.

One of the sub-contractors, Dr Eric Davis, in a radio interview on the 'Coast to Coast' show, on 28 January 2018, said that DIRD authors were asked to imagine our earthly technology; extrapolate it to 2050, then compare what we might have by then, against what we saw of the phenomenon in that era (around 2009.)

We currently know that 38 DIRDs were authored, with 36 of them being 'unclassified.' We also know the titles of six DIRDs which Dr Davis authored/co-authored; and one title by Dr Hal Puthoff.

Full copies of two of Davis's DIRDs, and one of Puthoff's are available on the Internet. A shorter version of Puthoff's DIRD appeared in an open source publication in 2010.

'In the 28 January 2018 interview on 'Coast to Coast,' Davis says the following about the DIRDs: 'a colleague of ours, who was a former PhD student at (of - KB?) Werner Heisenberg, also did a paper on advanced nuclear propulsion...' This could be Friedwardt Winterberg. Here he is (http://www.icarusinterstellar.org/team) along with Eric Davis and Richard Obousy (who authored one of the DIRDs with Davis.'

Friedwardt Winterberg was born on 12 June 1929 in Berlin, Germany. He received his MSc in 1953, and his PhD in Physics in 1955 as a student of Werner Heisenberg. 'Operation paperclip' took him to the USA in 1959.

His primary areas of research have been nuclear fusion and plasma physics.

He is an elected member of the Paris based International Academy of Astronautics,

His recent work has been on the 'Planck Aether hypothesis,' trying to explore both quantum mechanics and relativity.

This all appears to indicate that Winterberg authored one of the 38 DIRDs, under a sub-contract to the AAWAS program, on the topic of advanced nuclear propulsion. It still however, leaves us short of knowing the title and contents of the DIRD.

The DIRDs of which we are aware, were all dated either 2010 or 2011. In addition, we know that Puthoff's 2010 DIRD was also published, in a shorter version, in the Journal of the British Interplanetary Society in 2010.

I therefore wondered, what papers Winterberg had published in open source in 2010/2011; which fit the Davis description of being in the area of 'advanced nuclear propulsion'? I therefore searched a list of Winterberg's published works.

I found three such papers:

3. 'Negative Mass Propulsion.' 2011. 'Journal of the British Interplanetary Society' 64, 3-16. Part of the abstract of this paper reads: 'But their use for propulsion by reducing the inertia of matter for example in the limit of macroscopic bodies with zero rest mass.'

Any one of the above could have been made the subject of a DIRD, but note the last six words 'macroscopic bodies with zero rest mass.' These words will take significance later on in this blog.

In 1976, the Chicago based Center for UFO Studies (CUFOS) held a UFO conference between 30 April and 2 May of that year. Subsequently, a 'Proceedings of the 1976 CUFOS Conference' were published. 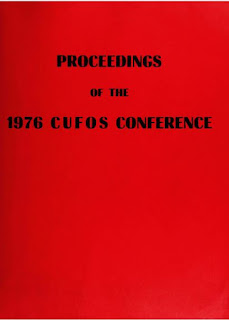 One of the papers presented, was titled, 'The Physical Possibility of Macroscopic Bodies Approaching Zero Rest Mass and the UFO Problem.' 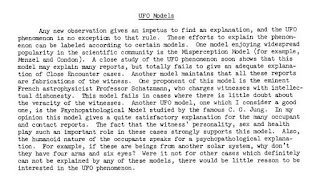 ' UFO reports by highly reliable witnesses have in common the observation of solid physical objects (1) with no or almost no inertial mass; (2) surrounded by an intense corona-like discharge; (3) possessing strong magnetic fields; (4) producing no sonic booms at the high velocities reported. These characteristics suggest a state of matter approaching zero rest mass. If such a state exists, then interstellar distances could be traversed in an arbitrarily small proper time and with vanishingly small amount of energy.

An appendix to the Proceedings' papers provides the following information about the author of this 1976 CUFOS Conference paper.

'...received a PhD in theoretical Physics in 1956 under Prof Heisenberg of the Max Planck Institute. He is the author of about 80 scientific publications in the field of nuclear fusion. His most important work relates to his original proposal for igniting thermonuclear microexplosions by means of intense charged particle beams. This work is presently receiving world wide study.'

Who was the author of this 1976 UFO article? It was in fact, Dr Friedwardt Winterberg.


A search for further UFO research by Winterberg

Although I found mention of Winterberg's work in two UFO books (Hill, P.R. 'Unconventional Flying Objects;' and Potter, P.E. 'Gravitational Manipulation of Domed Craft') these references were to his nuclear work. I found no other papers by Winterberg on the subject of UFOs. I did however, find one 1978 Winterberg article titled 'Electrostatic Theory of Ball Lightning."

In order to ascertain if my anonymous commentator's deduction was correct; and that Dr Winterberg was indeed another DIRD author, I located an email address for the now aged 90 year old Winterberg; who is still listed under the Physics Department of the University of Nevada, Reno, and posed the question of authorship to him.  I have not, as yet, received a response.
By Keith Basterfield at July 22, 2018