Still in the shadows

Last July, I decided to re-focus my UAP research, and now it is time to evaluate how this is going.

One of the things I instituted, was to cease using Facebook in my UAP work. So, yesterday I spent a little time looking at a variety of current Australian Facebook UAP pages. I had previously noted, that I had found little actual research occurring on such pages. My review, yesterday, found that between July 2016 and now, that things were no different. Facebook UAP ‘research’ still consists of short comments; very little data exchange; and no analysis of material or sightings. So, I feel that my decision to stop using Facebook for my research, was justified.

A second change, was to cease writing up reviews of books dealing with UAP. This has been relatively easy to achieve. Yesterday, I used the Amazon Books website to take a look at the titles, authors and content of both hard copy and UAP ebooks, since July 2016. I can count on one hand, the number of serious books to be found.

Since last year, I have been publishing on one blog, rather than my previous two blogs. The amalgamation has been going well.

I have continued to receive requests from both mass media outlets, and from documentary film makers for interviews with me. I have declined each one of these, as the mass media, in my opinion, seeks only entertainment; and many documentaries never survive the process of being created, edited and then coming to market.

So, all in all, I do not regret any of the changes which I made to the way in which my research has been going.

1. I completed a joint project with Anthony Clarke of UFO Research (NSW) Incorporated. This involved the two of us summarising nearly 60 audio recordings, of Australian UAP witnesses, recorded by US researcher James E McDonald, during his 1967 Australian trip. Our results may be found here.

2. I reviewed documentation about the famous 1957, Levelland, Texas, USA, multiple witness, close encounter case. I prepared, then published transcripts of three rare interviews about the incident. 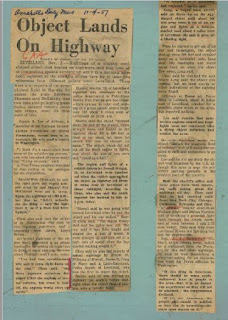 4. Paul Dean of Melbourne, and I, also researched, then published, a detailed ‘cold case’ review paper, about the visual sighting and color movie film taken at Port Moresby, New Guinea, on 23 August 1953. Our paper may be found here. 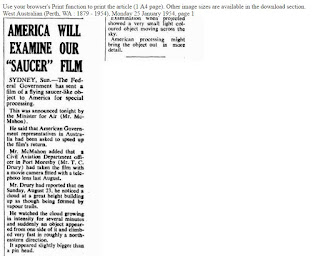 5. I have contributed a review of about 40 Australian sightings, which are listed on the NICAP website. I updated both content, and references to these.

6. In addition, also on the NICAP website, I have updated some 40 non-Australian cases; all documented in the US Project Blue Book files. Here, I provided case summaries and copies of the Project Blue Book documentation, downloaded from the Fold3 website.

7. Paul Dean and I are currently working on some comments about the 1986 Japan Air Lines flight, encounter over Alaska.

As can be seen from the list of what I have been doing, my re-focus has been to work in the area of quality, detailed research, away from the rambunctious (uncontrollably exuberant; difficult to control; noisy) social media environment.

I feel it worthwhile to repeat my recent mantra, to my Australian UAP colleagues. Consider stepping away from the use of social media, and conduct your research ‘in the shadows.’ You will find an immediate benefit.
By Keith Basterfield at May 24, 2017