Could bolides cause some vehicular UAP cases?

I was talking to a friend recently about the observation of bolides (very bright meteors). He told me that on two occasions, while travelling in rural locations at night in a car, that the whole countryside had suddenly, brilliantly lit up.

Looking up, he then observed a bright fireball crossing the sky. He remarked that the entry of the meteor into the Earth’s atmosphere must have generated an immense amount of energy, which then lit up the entire countryside, as bright as daylight, for kilometres around.

I responded by telling him that one night I had been out in my back garden when the entire area lit up just like daylight, for a second or so, then went dark again. This lead us on to talk about electrophonic sounds, heard when bolides are seen in the sky.

These sounds have been heard for centuries

For centuries, observers have been reporting, that simultaneously with seeing a bolide, they heard unusual sounds around them. These sounds, later named electrophonic, were separate from the sonic booms heard moments after the passage of a bolide. Electrophonic sounds were heard at the same time the bolide was visible.

For many years, these electrophonic sounds (hissing, swishing, rushing, roaring, crackling, sizzling, rustling) were felt to be of psychological origin, for no physical mechanism seemed to be able to explain them.

Then, Colin Keay, an Australian physicist, investigated sightings of a bolide which passed over New South Wales, Australia in 1978. He found that some observers reported electrophonic sounds. He then went on to demonstrate that large meteor fireballs generated very low frequency electromagnetic energy, which may be audible to some observers on the ground. This energy is transduced into sound waves by nearby objects such as a fence; vegetation; spectacles, and hair. It has now been scientifically accepted that this mechanism does explain the electrophonic sounds described by some, but not all, bolide observers. 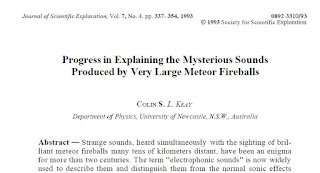 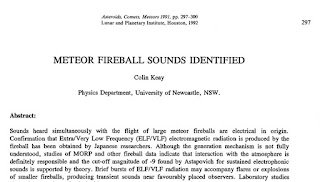 I read a number of scientific papers about electrophonic sounds from bolides. 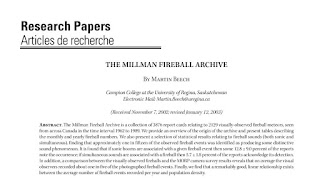 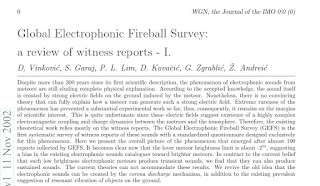 However, it was on Colin Keay’s website homepage that I came across something very interesting.

‘In 1992 veteran fireball reporter Bob Pugh of Oregon, USA, collected several reports of a large fireball which passed over the Coos Bay region. Besides reports of hissing, crackling and popping sounds at the same time as the fireball was seen, there was a report of a house trembling and a metal lamp making a static-sizzling sound for 2-3 s. At Winston, OR a shock was also felt inside an automobile. Near Diamond Lake Junction an observer felt a pressure on his chest at the time of the fireball.’

The interesting part about the above, was the physical effects noticed, apart from the electrophonic sounds.

Long term readers of this blog, will now know where I am going with this blog post!

I revisited one of my catalogues of UAP reports, one which detailed observations from persons travelling in automobiles, usually in rural settings. I found four Australian sightings along the lines of interest to me.

1. March 1970, Scottsdale, Tasmania.
A forestry worker was driving alone when he saw a flash of light in the sky. His car radio was overcome with static. A soundless, green object, three times the angular size of the full Moon was seen to the rear of the vehicle. (Source – TUFOIC.)

2. 5 February 1979, Lawitta, Tasmania. 2150hrs.
While driving alone, a man noted his car radio had died. Seconds later, an intense white light enveloped the car and he could not see beyond the bonnet. The car’s lights and motor failed in the same instant. Beyond the events are vague and the next thing he knew he was being stopped by police for driving the car without lights at night. He was taken to hospital and examined, and found to be in a state of shock. His vehicle, a Ford Cortina 71TC was inspected and found to have a flat battery and the engine oil level was low. The cut-off switch on the alternator needed replacing as did wiring, especially the headlights. Radiator water was also low. (Source – TUFOIC.)

3. April 1979, Gormanston Saddle, Tasmania. 0020hrs.
A green light with a purple edge came straight at a taxi driver, seemingly going straight over the vehicle, and lighting up the interior as if it was daylight. The taxi lost power and would not accelerate, the motor just shook. The driver tried to radio for help but it was dead. After the light passed, everything returned to normal. (Source – TUFOIC.)

4. Ca. 1994, Harvey Creek, Queensland. 2030hrs.
A huge light approached two women travelling by car. The engine and lights of the car went out for no apparent reason. The light passed over the car, temporarily blinding the women. After a few seconds the vehicle’s lights came back on by themselves. The engine of the car started the first time the ignition key was turned. (Source – UFORQLD.)

Can bolides explain these case?

My question at this point, is, could electromagnetic energy from a bolide produce these kind of effects reported within the UAP literature? Obviously, a lot more research needs to be conducted.
There is one more UAP report which I would like blog readers to consider under this hypothesis.

16 September 1974, St. Helens, Tasmania. 2115hrs.
This very unusual event occurred to Mrs Andrea Richards, housewife, thirty four, and her daughters Janine (eight) and Kathleen (five) when they were travelling home to The Marches near . Weatherwise it was a light drizzling rain, on a dark night. They were all very tired when suddenly static was heard on the radio. As soon as the static began the sky directly ahead became brightly lit up. The car lost power on a gentle incline, then stopped dead. The headlights, radio, heater, and dashboard lights all went out, and it was dark apart from the light in the sky.

Mrs Richards tried to start the car but after ten seconds a deafening, vibrating noise enveloped the car. This lasted about a minute. Almost simultaneously, quite painful, electric shocks began penetrating their bodies.

The car was then filled with an invisible chocking smell. Both Mrs Richards and Janine jumped out of the car taking Kathleen with them. They fled down the road leaving the car. The light in the sky was still visible. They went to a house. Upon returning to the car the car started alright. The next day it was checked at a garage but no faults were found. Mrs Richards suffered a numb right side to the face and a two cent sized red mark above her right eyebrow. The day after, her arms and fingers were badly swollen and she had difficulty walking. (Source – TUFOIC.)

The full report on this sighting may be read here.