The last of the series from James E McDonald's 1967 Australian audio collection.

On 24 January 1966 at about 2230 hours, a Mr Benedek was in Perth, Western Australia.  He said he was taking colour photographs when he saw a bluish-green light, he described the object as, ‘It was oval shaped with an ‘antenna’ on the front and dropped towards the river at terrific speed’.

It is claimed that the Royal Australian Airforce (RAAF) examined the photographs but nothing to this effect has been found on RAAF files in the National Archives of Australia.

Various details on this sighting have been published: 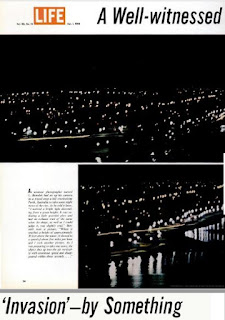 Benedek says that he moved back with the camera, and placed the camera on a rock.  McDonald states that it is clear that the second and third photographs were taken from a slightly different place, as indicated by the position of the brush in front.  McDonald mentions someone called Martin, who was bothered about the first of the three photographs, in that the alignment of the distant lights suggests quite a substantial displacement from the other two photographs.  The photograph in questions was the one showing a small dot.  Benedek responds by saying that the first photograph referred to by McDonald may not in fact be the first one that he had taken.  Benedek claims he used a complete roll of film.

Benedek was at Kings Park, Perth, taking photographs.  Then he went towards the bay where there is a park.  There he said he sighted the ‘flying saucer’, and he was able to take three photographs of the object while standing at the same location.  McDonald suggested that the first photograph was taken 400 to 800 metres from the other two photographs.  Benedek wondered if he had mixed up the photographs.

McDonald said the pictures appeared in an UFOIC magazine cover with an arrow pointing to a dot.  McDonald then discussed Martin’s second point of concern.  This was that photograph two, the one with the flare-like object at a higher angular elevation than photograph three, shows the streaks on a distance highway broken into three parts.  A correspondent of Martin’s had surveyed the site, this indicated that the small breaks in the photograph were caused by trees.  This finding appeared to confirm that there were only three cars.  McDonald then states that based on this finding his estimate of the photograph’s negative exposure time was 15 seconds.  Ripples on the streaks had been measured and corresponded with a breathing rate.  He was puzzled about the tripod mounting and how the sinusoidal ripples occurred?

Benedek claims that he had the camera on a tripod.  He kept his finger on the button to keep the camera shutter open, allowing him to take a time exposure.  The ripples in the photograph could have been due to his hand shaking.  McDonald claims that Martin thought it was on a cable release.  Benedek claimed that he had set the camera to ‘B’ setting and therefore not used a cable shutter release.

McDonald then asks, ‘what about the estimate of 15 seconds?’  Benedek is uncertain, stating, ‘I thought it was less than 15 seconds, perhaps 10 seconds’.  Benedek claims the object was hovering at first then moved downwards.  Martin’s correspondent had duplicated the scene using a 15 second exposure.

McDonald asked, ‘How long it had been between when the photographs were taken and developed?’, Benedek answered, ‘it was a week’.  McDonald then asks, ‘what did you do then?’, Benedek replies, “I took them to the Sydney Morning Herald, they said, ‘we will reproduce them as black and white, why not take them to Life International?’”  Benedek claims a Mr Shirley of Life International told him to submit the photographs to the RAAF.  He did this, and an officer from the RAAF told him, ‘certainly not reflections’.

Life International published the photographs in the 18 April 1966 edition.
By Keith Basterfield at November 18, 2016