The initial report came via David Reneke. David passed it on to Paul Dean of Melbourne, who contacted the witness by email.
The witness then supplied the following response by email:


"I am open minded ,and like things explainable if you know what i mean, what i saw was strange and could not work it out , must have been some size for me to see it with the naked eye from a distance, I'm in Blue Haven; on the 11th of May ,2pm just above Wyee a town in NSW Central Coast ,  i was checking the mailbox, and saw a black/ grey object ,had no shape just look like a mass or round ? dark colour, wasn't a plane or helicopter ,and just hovering not moving, then a light flash ,like sunlight on a window and it was gone, went inside to get the camera and binoculars but it was gone ,no sign of anything, the weather was clear no clouds. Checked the web to see if anybody else had seen anything but could not find anything at all.”
A follow up email from Paul Dean asking a number of questions, received the response:


Blue Haven is situated on the Central Coast of New South Wales at latitude 32.20 degrees south and longitude 151.48 degrees east.


2. Weather:
A check of the Bureau of Meteorology website revealed the two nearest stations were:


3. Local paper:
The Gosford, Central Coast, Express Advocate was checked for May 13 and 15th- the nearest issues. There were no mention of UFO reports. A letter to the editor was published in the newspaper, asking for additional witnesses to this event. No such witnesses contacted the authors.


4. Local radio station:
A check was undertaken of the blog site for radio station 2GO, Gosford. There were no mention of any UFO reports around the 11 May 2015.


5. Local UFO group:
There is a local UFO group run by Joann Kanda, at Tuggerah Lakes, close to the location of Blue Haven. Joann was unaware of this case, and knew of no similar reports from around 11 May 2015.


Joann advised us that:

"...maybe six weeks ago I recall reading the neighbourhood watch fb page and chat site where there had been much discussion about large helicopters in that area and wanting to know what they were. Looked grey from a distance but black and white. Admin eventually intervened and said they were ausgrid helicopters." 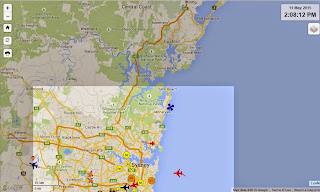 The blue symbol is in fact a helicopter, heading north towards Blue Haven, at an altitude of 500 feet.

2. Joann refers to the colour of the AusGrid helicopters being grey when seen from a distance. The Blue Haven witness says his object was grey, dark.

3. Helicopters do of course make noise. The witness however says there was no sound associated with his object. But hearing noise from a chopper depends on wind direction and distance from the witness.


4.  There was a helicopter in the general area at the time. The following link shows a map of selected areas and scheduled dates for AusGrid helicopter patrols:

5. However, our Sydney research associate contacted AusGrid in Newcastle, and was advised that "records do not show any helicopter patrols in the Wyee/Blue Haven area on 11th May." Thus ruling out an AusGrid helicopter as the cause of the Blue Haven sighting.

6. However, the behaviour of the object, i.e. "hovering"" over the power lines is still suggestive of the possibility that the object might have been a helicopter. We have not been able to identify the helicopter shown on the WebTrak screen. We must, however, note that the witness stated that in his opinion, the object was neither a helicopter nor an aircraft.

7. Our Sydney research associate visited the area of Blue Haven; looked at the location of the power lines; and noted that the area is not on the usual aircraft routes into/out of Sydney. In his view, the object appears not to have been a helicopter or aircraft.

Based on the information available to us, we have not been able to conclusively ascertain the identity of the object seen at Blue Haven.
.
By Keith Basterfield at May 21, 2015