Frederick Phillip Stone - An unpublished book manuscript emerges from the past

Fred Stone was born on 23 Sep 1903 in Parkside, an Adelaide suburb, and was enlisted in the Defence forces between 1939 and 1948. He had an intense interest in the subject of "flying saucers," which lasted between 1953 and 1976. He started the Australian Flying Saucer Club in 1953, following a personal sighting. Then, in 1954 he formed a South Australian branch of the Sydney based, Australian Flying Saucer Bureau (AFSB). The 1954 state electoral roll shows his profession as "Trimmer." Later, in 1955, the Australian Flying Saucer Research Society (AFSRS) was initiated by Stone, who also started a New South Wales branch in that same year. However, by 1956 this NSW branch became the UFO Investigation Centre (UFOIC).

Stone's 1955 view of flying saucers was:

"We know and can reasonably prove:
(a) That UFOs exist and that they are extra terrestrial
(b) That they are manned and controlled by beings of a high order of intelligence, mentally and spiritually."

Between 7 Mar 1955 and 7 Mar 1956, 15 piece of correspondence between Fred Stone and the RAAF's Director of Air Force Intelligence (DAFI) in Melbourne, are to be found on RAAF files 114/1/197 and 554/1/30 part 1, held in the National Archives of Australia (NAA). Stone's correspondence initially advised the RAAF that the AFSRS had been formed, but went on to seek a liaison with the RAAF about flying saucers. Later on, he sought information from the RAAF about two members of the AFSRS; and was later granted an interview with DAFI in September 1955. Following this meeting, Stone stated that the RAAF promised closer liaison with civilian UAP groups.

In 1962, the year that ASIO wrote a report on the AFSRS, Stone started up another group, called UFO Phenomena Investigation Australia (UFOPIA). At the 1965 Ballarat, Victoria, UAP convention, Stone called for unity among Australian UAP groups.

By 1969, Stone decided that it was time to wind down, citing age and ill health. Stone advised his committee that he intended to resign. In Mar 1971 he resigned as President. By May 1972, UFOPIA went into permanent recession and never came back. Stone passed away in 1976.


A meeting with Fred Stone's son:

In late 2014, I was contacted by Sue and Rod Stone, who advised me that they wished to donate a small collection of Rod's father's UAP  books to someone interested in the topic. I visited Rod and Sue in their Adelaide Hill's home and spent several very pleasant hours discussing the topic of flying saucers with them both. 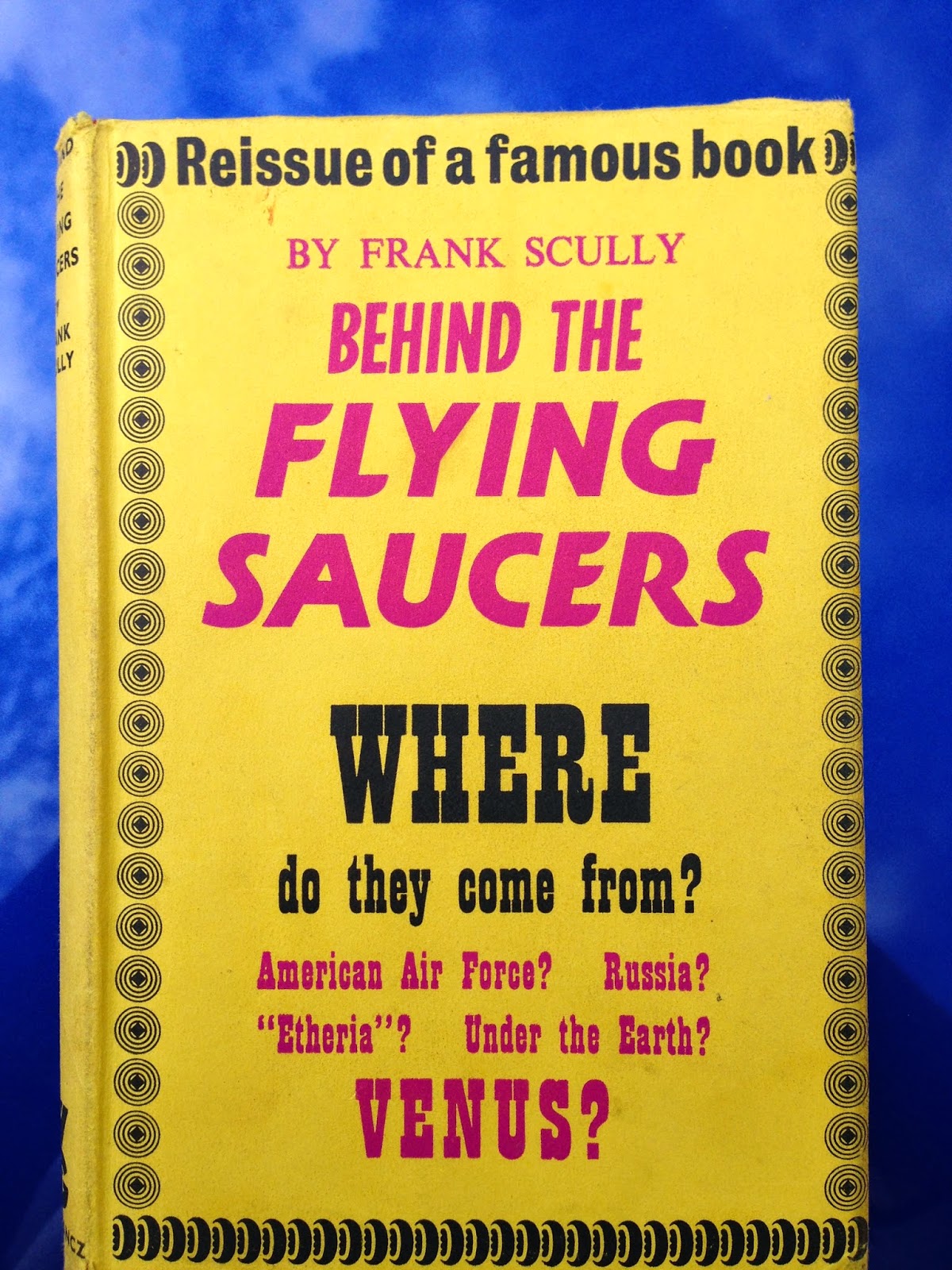 Later, while going through the small cardboard box of books, I came across an unpublished book manuscript, written by Fred Stone, in 1954 (with additional material at various later dates, up to 1976.)

The manuscript consists of approximately 130 fragile, typed pages. It is titled "The Message of the Saucers." The chapter headings reveal the nature of the hypothesis he puts forward in this early work. They are:

There is a foreword, attributed to George Hunt Williamson, dated 6 April 1958, Lima, Peru. The following are some notes I made while reading the manuscript.

Prior to his own sighting in 1953, Stone tells us that "I did not believe in them and considered them a lot of "hooey." (P.8.) However, in 1953 at about 6.30pm in an Adelaide suburb, he noted "... a very long strange dark cloud in the west, in an otherwise cloudless sky...within this dark cigar shaped cloud, there was a squat shaped saucer-like object."

To his amazement he could "...see four more of these objects running from the south to the north quite stationary..." After a while "...the southernmost object suddenly shot away at an angle of ninety degrees from the cloud into the west and disappeared at an amazing speed." Sometime later, "...the second one shot away as did the first..." Stone then boarded a bus and lost sight of the remaining objects.

The Australasian Post magazine carried a series of articles on the subject of "flying saucers" and Stone wrote to the magazine seeking other individuals with which to discuss the topic. He soon had a considerable number of correspondents;  and started to research the claims of Adamski. He set out to "...interpret the meaning of the message he received from the 'Venusian.'" (p.12.)

When researching Adamski Stone came to the opinion that "...the burden of feeling that I was holding a warning message from mankind was not pleasant, so like the prophets, I give you that message..." (p.14.)

In arriving at his conclusions, Stone reviewed the biblical accounts of the great flood; checked into aspects about the great pyramid in Egypt; discussed 1950's concerns about the environment and the atomic bomb; and recounted dire warnings contained in the bible. Chapter nine, written in 1961, reviews the testimony of contactees, through both mental and telepathic means. Stone recounts a personal experience of what to him, was an incident of telepathy.

Stone concluded that "...the Venusian and his message is one of warning to this earth and a fulfilment of prophecy, and if he fulfils one part of it the other must likewise be very real and about to happen." (p.71.)

By page 80, Stone writes: "In the previous chapters an honest attempt has been made to show you my readers that there is a strong relationship to the "saucer people" and the visitors from "heaven" spoken of in Holy writs, and therefore they are not a modern phenomena."

On page 85, "The writer is convinced...that no one will reach a proper true explanation of the mystery unless they are prepared to delve in to the "spiritual" aspects of the matter, and that the identity of the space men are closely allied with religious history and their visits at the present time is strongly connected with International, Terrestrial, and Cosmic events which the records of sacred writings refer to..."

Stone goes on to refer to "...two forces at work, positive and negative." (p.86.) On the negative side, Stone relates in some detail the curious cases of American Albert Bender, Australian Edgar Jarrold, and several other unnamed researchers.

By page 133 Stone is summing up his research findings:

(a) Historical records - "...great cataclysmic changes" in the earth which were caused by conditions which are similar to those prevailing today.

(b) "The Great Pyramid tells of A Plan of the Great Architect in which the world was to progress to a certain stage."

(c) Current world history - "...there is no hope for humanity unless there is brought about some salvation by Divine intervention."

(d) The bible - refers to our time and age, with warnings and promise of deliverance.

(e) "And finally the saucers evidence shows clearly that the intention of at least the Adamski visitors and those of his kind are surely for our help and good, for their's is a message of warning, and also who knows of deliverance..."

(f) "...on the other hand if there are more than one kind of saucer people interested in this world, and as some declare some not for our good then the presence of any opposite force of similar character means that at least one type is here for our aid and help and to overthrow the others."

I would like to thank Sue and Rod Stone for the opportunity to read this unpublished manuscript by one of the main drivers of early UAP research in this state. Seen from the year 2015, it is plain that Stone's work and conclusions are a product of that era. There was great concern about the future of humanity, due to the atomic bomb and other social and physical factors. This was the message of many a contactee from that era.
By Keith Basterfield at February 21, 2015