Having recently posted about the American Institute of Aeronautics and Astronautics UAP study committee (click here) (1967-1970); and the American  Association for the Advancement of Science 1969 UAP symposium (click here), this post takes us closer to my home, in Adelaide, South Australia. This is because in 1971, the South Australian Division of the Australian and New Zealand Association for the Advancement of Science (ANZAAS) (click here), held a one day symposium, in Adelaide, on 30 October 1971. I doubt if many blog readers have ever heard of this symposium, so I thought it would be useful to write a little about it.

Interestingly, we can gain insight into the aims of the symposium from correspondence to be found on National Archives of Australia file series A703, control symbol 554/1/30 Part 2, the RAAF's UAP policy file. 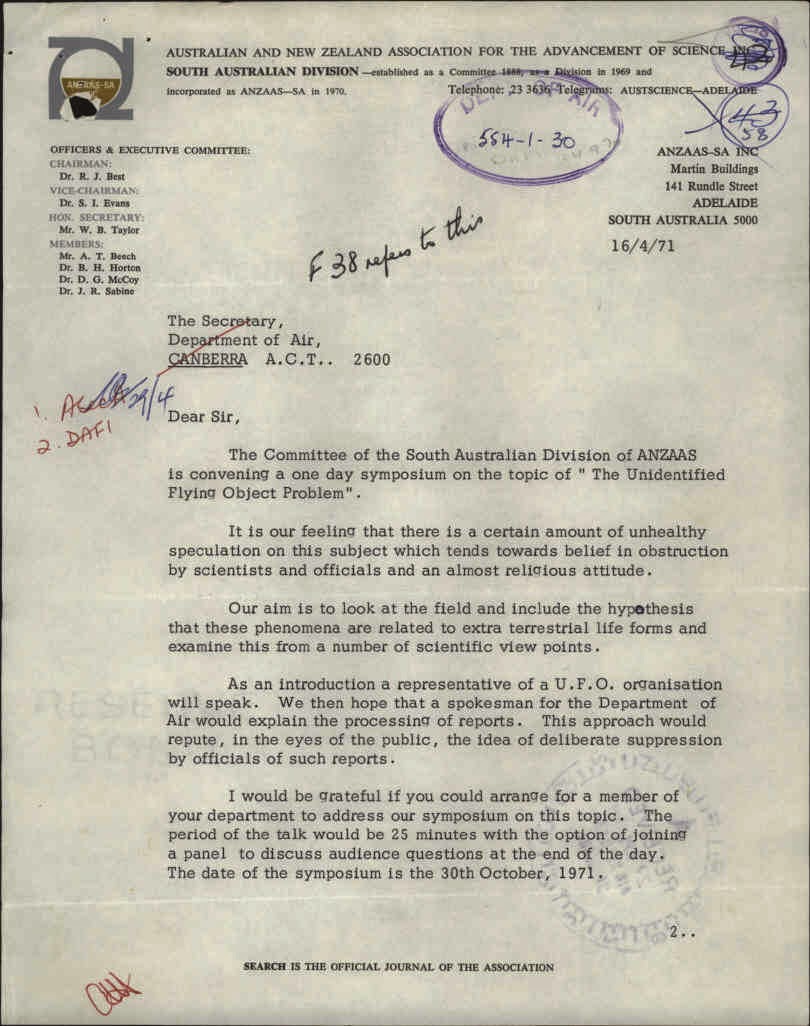 "The committee of the South Australian Division of ANZAAS is convening a one day symposium on the topic of "The Unidentified Flying Object Problem." It is our feeling that there is a certain amount of unhealthy speculation on this subject which tends towards belief in obstruction by scientific and officials and an almost religious attitude.

Our aim is to look at the field and include the hypothesis that the phenomena are related to extraterrestrial life forms and examine this from a number of scientific viewpoints.

As an introduction a representative of a UFO organisation will speak. We then hope that a spokesman for the Department of Air would explain the processing of reports. This approach would repute, in the eyes of the public, the idea of deliberate suppression by officials of such reports.

I would be grateful if you could arrange for a member of your Department to address our symposium on this topic. The period of the talk would be 25 minutes with the option of joining a panel to discuss audience questions at the end of the day. The date of the symposium is 30th October 971. I am enclosing a first draft of a program for the symposium for your information.

Trusting you can assist us in this venture."

The attachment to this letter reveals the thinking behind the symposium, and its origin.

"During a recent discussion program with listeners' participation on a commercial radio station in Adelaide, the station switchboard was jammed one minute after opening and remained so for the one hour duration of the program.

The topic discussed, which produced such interest, was Unidentified Flying Objects. The listeners' contributions ranged from a personal report of sightings to statements of disbelief. Explanations of the sightings by a physicist on the program in terms of physical phenomena was more educated guesses than sound science. The basic reason for this is that few persons with scientific knowledge are willing to consider the problem seriously. Thus when the topic is discussed with the public, which is definitely interested, scientists appear unknowing and disinterested.

The Committee of the South Australian Division of ANZAAS felt that such an image does very little for the scientific community and, a one day symposium titled "The Unidentified Flying Object problem," to be held in Adelaide on October 30th 1971.

The form planned for the symposium is as follows"

(a) A statement of reported sightings by a senior member of the "Flying Saucer Research Group."

(b) A coverage of the treatment of such reports by official bodies given by a responsible member of such an organisation.

(c) A reasonably detailed discussion of the various physical phenomena usually described loosely by non specialists in a number of published explanations.

(d) In view of a largely held belief UFOs are extraterrestrial observers examination of this hypothesis should be considered. The first topic suggested is a study of compatibility of the form of sightings with known satellite observation techniques and foreseeable developments in this field.

(e) If UFOs are extraterrestrial, where is their place of origin? What are the chances of there being other planetary systems in the galaxy. e.g. are there theories relating to the angular momentum of stars and the possible existence of planets. What ranges of radiation fields, temperature conditions, atmospheres, would be expected.

(f) If other planetary systems exist, what conditions would support molecular structures of the complexity necessary for a sentient being capable of constructing surveillance vehicles. What atoms have properties capable of forming complex molecules. Are there examples of such structures. What is the probable form of an extraterrestrial being? How long would it take too develop? Is there a limit to the period that such a species would remain viable.

(g) Given hypothetical distribution of possible planetary systems in the galaxy, and hypothetical development and stable periods for a species what are the chances of space-time coincidence of two space capable technologies with foreseeable and conceptually possible transport systems.

(h) A final paper by a recognised scientist who regards the whole problem as real and worthy of serious attention by the scientific community in view of the observational material available and the often undermanned investigation of this material.

(i) A period in which some or all of the speakers form a panel to comment on points brought out in audience participation discussion."

Digital page 39 of the file, is a minute from Group Captain R S Royston, Directorate of Air Force Intelligence (DAFI) to the Director of Public relations, dated 11 May 1971.

"1. Reference folio 43. It is suggested that you might reply advising the committee of the South Australian Division of ANZAAS that it would not be possible for a member of this Department to attend the symposium on 30 Oct 71 to discuss "The Unidentified Flying Object Problem."

2. It is suggested you might forward Dr Horton a copy of the summary of Unidentified Sightings that you hold in your directorate."

On this minute there are hand written notes, dated 12 May 1971 from the Director Public relations to Assistant Secretary, Air.

"DAFI has recommended that no member be made available to attend the above mentioned symposium. But I do not know whether this will be the departmental attitude. The attached address by Mr R G Roberts will be sent as a useful contribution. The ANZAAS body is a reputable one."

"I agree that a member of this Department should not attend this symposium. I also consider that the suggestion by S Air SS as a footnote to folio 44, that a description of our method of processing reports be provided in lieu of a speaker should be adopted. We might also include reference to our interest in Unidentified Flying Objects and the limits of this interest. A reference to the Condon Report would also be appropriate."

On the 17 Jun 1971, the Secretary, Department of Air, responded to Dr Horton:

"It is regretted that it will not be possible for a member of the Department of Air to attend the symposium on the topic of "The Unidentified Flying Objects Problem" to be held on 30th October 1971. It is hopped however, that the following information may be useful to your society during discussions.

There is no evidence that UFOs have landed in Australia, or, in fact, anywhere on earth. Naturally, however the Department of Air is concerned with any possible threat to Australian security and in that context all reported sightings of UFOs are investigated by RAAF officers. When a sighting is reported to the RAAF, an officer from the nearest RAAF unit interviews the person making the report. The interviewing officer records all pertinent details on a pro forma which is subsequently forwarded to the department of Air where it is processed and summarised. Summaries are held by the Director of Public relations who will provide them to members of the public on request. The summary of sightings is at present being brought up to date and a copy will be forwarded to you within a few weeks.

You may or may not be aware that the United States until late 1969 had a team of scientists investigating the possible presence of UFOs in the American region. Under the direction of Dr Edward Condon, the University of Colorado carried out an exhaustive study. Their report concluded that little if anything had come from the study of UFO reports over a period of 20 years and that further extensive study is not justified. The findings of this investigation were published by Bantam books in a paperback titled "The Condon Report."

Attached for your use is a summary of an address given by Mr B J Roberts, a member of the Department of Air to the Ballarat Astronomical Society at ballast in 1965. It is hoped this will be of value to your discussion."


The Symposium is held:

The symposium went ahead, in Adelaide, South Australia, on 30 October 1971, with an audience of about 300 people in attendance. The program presented was: 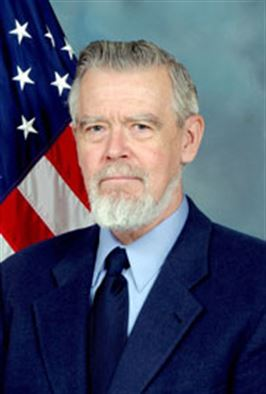 A motion was agreed by those at the symposium:

"The symposium as a group feels very strongly that some action on the problem of UFO reports be taken...(and) that  the possibility of setting up a subcommittee for the study of UFO reports be considered by the executive committee of ANZAAS (SA Division.)"

No such subcommittee eventuated.

In looking for a copy of the proceedings of this symposium, I located a copy in the National Library of Australia, but failed to find one in the State Library of South Australia. I would welcome hearing from anyone who may have a scanned copy of this document, via an email to me at keithbasterfield@yahoo.com.au
By Keith Basterfield at September 01, 2014