"I seek all emails, sent to/from or cc'd, CSIRO staff, including any attachments, for the period 1 June 2021 to 29 August 2022; which contain keywords "Unidentified Aerial Phenomena;" and/or "UAP" and/or "UAPs" and/or "Unidentified Flying Object" and/or "UFO."

"CSIRO's FOI team has conducted internal enquiries to ascertain how many potentially relevant documents CSIRO might hold that relate to your request and the work required to search for, identify and collate those documents, prior to reviewing them and preparing a decision in response to your request.

Given the amount of work we estimate that would be required, I have decided that I need to send you this notice of an intention to refuse access to the documents you have requested...

The results of our searches todate indicate that CSIRO is likely to hold at least approximately 22,500 items including emails and attachments, that may be relevant to your request...

This amount of items concerning a topic about which the CSIRO says it does not research or investigate, seemed excessive, and I wondered how this volume of items could  be possible?

"I confirm that electronic searches were conducted by CSIRO Information Managment and Technology staff of all CSIRO email accounts...The searches resulted in a very high volume of documents being captured, including emails containing numerous media feeds that were addressed to multiple employees...From the roughly 7,000 items captured...CSIRO's FOI team identified four documents that fall within the scope of your request due to the inclusion of one of the keywords..."

1. An email dated 1 July 2022 from [redacted] to [redacted A&F, Black Mountain] Subject: Whata headline. "I wonder what they were going out there? Sounds suss. And where is the wheel? UFO country out there."

There was a link shown of https://duchetridao.com/two-men-mired-and-lost-on-south-african-outback-dirt-road-for-two-days-rescued-by-police

2. An email dated 28 September 2022 from [redacted L&W, Sandy Bay] to Green Acres Hydroponics, "...unfortunately one of our 200w UFOs we bought off you has spontaneously stopped working..." 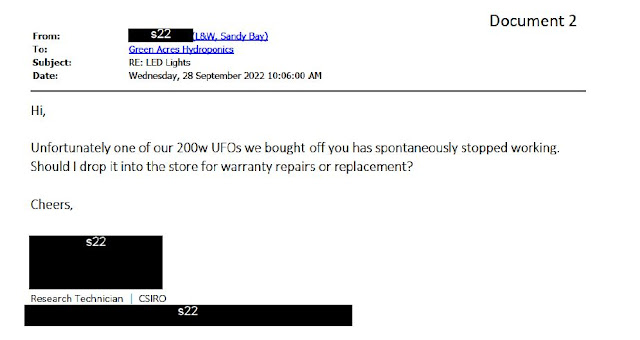 So, of the 7,000 items captured between 1 July and 5 October 2022, we end up with four documents. Compare this to the approximately 22,500 items captured for my request between 1 June 2021 and 29 August 2022, and we do not know how many actual relevant documents would have resulted if they had gone through the 22,500 items. However, given the nature of the four documents provided to Grant Lavac; it is reasonable to deduce that the approximately, 22,500 items would have produced may be a dozen documents. If these dozen were of the same quality as the four released to Grant, then they would have been of no value to us.