The official French government UAP study group, GEIPAN (Group for the study of information on Unidentified Aerospace Phenomena) last held a workshop (CAIPAN, Collection and Analysis of Information on Unidentified Aerospace Phenomena) dedicated to UAP, in 2014. This new workshop, was held in Toulouse, France, on 13 and 14th October 2022, with an interesting range of speakers and topics, relating to UAP. It is hoped, that as with the first workshop, that copies of the talks will be made available in due course. 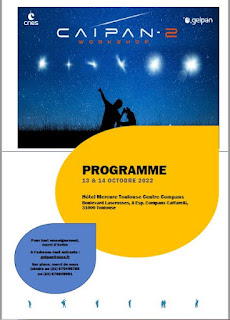 The schedule of presentations was:

0930hrs The head of GEIPAN CNES, Vincent Costes welcomed participants and outlined the objectives of the workshop.

1000hrs "Research on UAP at the Julius-Maximillans University of Wurzburg, Germany" was the title of a talk by Hakan Kayal, Professor of Space Technology.

1040hrs "Three emblematic cases solved with powerful image analysis software" was the title of a talk by Ruben Lianza, Commodore, Director of the Center for Aerospace Identification, Argentina.

1140hrs Jean-Marc Andre, a committee member of 3AF Sigma 2 spoke on "Use of data crossing in UAP investigations - Application on two cases."

1410hrs Yann Vadnais, Director of GARPAN and researcher in History of Ideas & Ancient Literature, from Canada, spoke on "The next steps to consolidate rigorous researches in UFOlogy."

1640hrs Synthesis of themes of the workshop, and debate.

1000hrs "Pairing Earth Observations and Unidentified Aerial Phenomena Observations: Towards a new Method to Investigate UAP Scientifically" was the title of a talk by Philippe Ailleris. He is on the AIAA UAPCOI steering committee and founding member, from the Netherlands.

1140hrs "Characteristics of the Hessdalen Unidentified Aerial Phenomena and methods of observations" was given by A L Kjoniksen and Bjorn Gitle Hauge, Ostfold University College, Norway.

1450hrs Francois Louange, a consultant to GEIPAN addressed "Where are we with photos and videos?"

1550hrs Pierre Lagrange, GEIPAN expert talked on "Does the history of the debate on the existence of meteorites enlighten that of UFOs?"

1. As we can see from the above schedule, there are representatives from a wide range of countries - France, Germany, Argentina, the USA, Canada, the Netherlands, Belgium, Norway, Italy and Spain, among others.

2. Interestingly, there are speakers from official UAP study groups of a nation, i.e. France, the USA, and Argentina.

3. There are academics, aerospace specialists, and established civilian UAP researchers.

4. We all look forward to being able to view videos of each of the presentations.

On the 28 October 2022, the debrief media outlet carried an article by one of the CAIPAN attendeees, Baptiste Friscourt.

Videos of the presentation are now available.