As part of my research for my talk I have been re-reading the book "The UFO Handbook" by Allan Hendry ( 1979. Doubleday & Co. New York.) To me, it is a classic text on both the subject of IFOs, and UFOs. 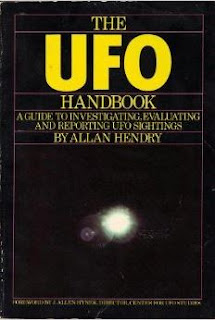 Hendry was employed by the US Center for UFO Studies (CUFOS) as a researcher. He was able to deal by phone "...with the witnesses of over 1,300 sightings in the United States." (p.3.) Most incoming calls were through a dedicated CUFOS police hot line. His total sample, he classified as 1,158 IFOs; 113 UFOs; and 36 exceptions" ( cases which held no "data, e.g. unreliable witness.)

At the end of his study he wrote that "Nine out of ten raw UFO reports are IFOs. They represent 90 per cent of the total UFO phenomenon by volume." (p.87.) Importantly, he noted that with both IFOs and UFOs, "The reports spring from the same sources  and channels, people of both sexes, all ages, all occupations, backgrounds, personalities, education, observational abilities, relative  training, and income."

Hendry reasoned that "A fruitful way to proceed here would be to list statements and characteristics about genuine UFOs that are supposed to make them unique and examine how these statements hold up in the light of the knowledge we have gained from the IFO accounts." (p.91.) He then went on to study these statements.

1. "UFOs are unique because of their appearance."

UFO researchers argued that "No natural or man-made object looks like a domed disc, especially when it is viewed with large angular size." Hendry found a number of reports of conventional stimuli which did just this, e.g. advertising aircraft; meteors.

2. "UFOs are unique because they are reported to move in ways that defy the laws of physics."

In exploring IFO reports Hendry found that there was a "...long series of reports where motion along 'line of sight' was to be claimed not only for airplanes but also for other IFOs like stars and advertising planes." (p.94.) He found it important to determine if  "...motion took place across one's line of vision or along one's line of sight." (p.94.)

3. "UFOs are unique because they make no noise or at least very little noise."

4. "The close encounter UFOs are unique because their proximity to the witnesses minimises the chance of misperception."

Hendry realized that "This would be true if it weren't for the realization that we seldom learn the actual distance between the observer and the UFO candidate." (p.98.)

5. "UFOs are unique because of the emotional reaction of the witness."

However, by studying IFOs, Hendry found many examples where there were extreme emotions of witnesses to IFOs, such as aircraft, stars, meteors, and Venus. In the end Hendry wrote "The conclusion is self-evident. When mothers are too scared to let their children out of the house to see Jupiter fluctuating in brightness for two hours overhead, and when wives scream for their husbands to get back in the car as an advertising plane flies near, then no one can claim that genuine UFO experiences have an exclusive hold on strong emotional reactions." (p.100.)

6. "UFOs are unique ... because the witnesses are determined to be sincere, reliable or sane."

After exploring a number of cases Hendry wrote "The disturbing feature of all these cases is this: as unacceptable as they appear as "data" in terms of accurate portrayals of actual events, they were delivered with the same degree of sincerity, conviction, and in the same state of unexcited casualness as any UFO cases accepted as genuine." (p.101.)

7. "UFOs are unique because they are reported by people with occupations or educations that indicate "trained observers."

Using the ration of IFOs to UFOs, per occupational grouping, he determined that pilots reports were actually of IFOs 75% of the time; and that law enforcement staff who reported sightings were reporting IFOs 94% of the time. So called, "trained observers" were as likely, if not more likely to misidentify stimuli.

In summary, Hendry stated that he found, for his group of 1000 plus sightings, "...that we cannot blindly accept UFO witnesses as "error free" instruments." (p.103.)

1. "Even with the very best UFO incidents to which I gained access in a year and a half, I was unable to establish anything better than a probability figure that the event actually took place in the extraordinary manner described, or that the source of the report was something truly anomalous, not already understood," (p.283.)

3. " But with our current inability to fully draw the distinction between real UFOs and IFOs, fantasies or hoaxes, coupled with a heated emotional; atmosphere, I can only assert that it is my feeling that some UFO reports represent truly remarkable events..." (p.285.)

In my exploration of the way investigations are conducted in Australia at this current time, I find that the lack of interest about IFO reports,  is not useful. I can do no better than the words Hendry wrote in 1979 "...they are doing themselves a disservice; the more reports they can succeed  in identifying and the more attempts to research the worthy ones, the more valuable the remaining cases will be." (p.279.)