A classic Australian UAP case is the observation of an unusual object, by farmer Charles Brew, near Moe, Victoria on 15 February 1963. The event features in early UAP literature, including:

As with my previous "cold case" reviews, I sought out  the most original sources of documentation about this case, and not the currently distilled secondary and tertiary sources found on the Internet.

There were at least three independent investigations of which I am aware. One by the Royal Australian Air Force at the time; a second by the Victorian Flying Saucer Research Society (also at the time); and one by US researcher James E McDonald in 1967. I secured copies of all this original documentation. I will be providing an in depth look, and "cold case" analysis in a series of four blog posts.

A digitised copy of this documentation is available from the National Archives of Australia, file series A703, control symbol 580/1/1 part 4, pages 373-390. 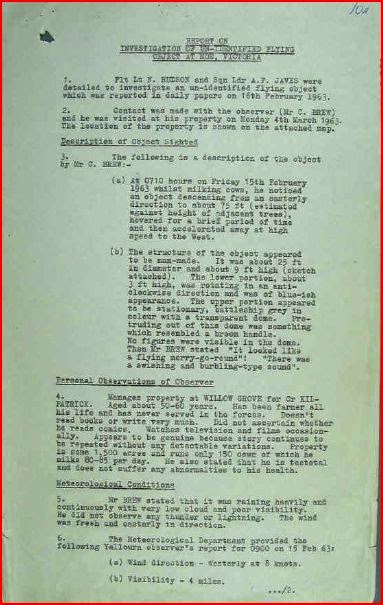 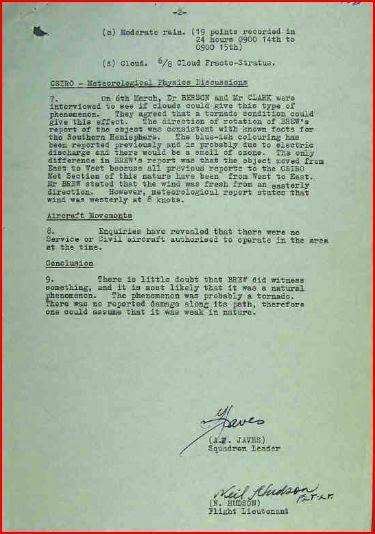 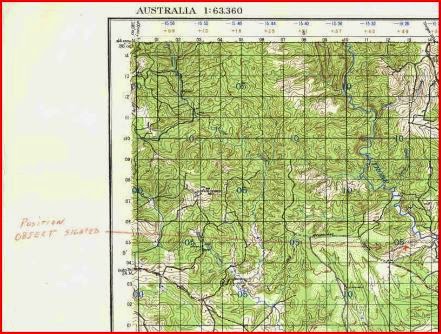 The key document, is the two page investigation report, signed by Flt Lt N Hudson and Sqdn Ldr A F Javes. It reads:

"Report on investigation of an un-identified flying object at Moe, Victoria

1. Flt Lt N Hudson and Sqdn Ldr A F Javes were detailed to investigate an un-identified flying object which was reported in daily papers on 16th February 1963.

2. Contact was made with the observer (Mr C Brew) and he was visited at his property on Monday 4th March 1963. The location of the property is shown on the attached map.

3. The following is a description of the object by Mr C Brew:

(a) At 0710hrs on Friday 15th February 1963 whilst milking cows, he noticed an object descending from an easterly direction to about 75 ft (estimated against height of adjacent trees). Hovered for a brief period of time and then accelerated away at high speed to the west.

(b) The structure of the object appeared to be man made. It was about 25ft in diameter and about 9ft high (sketch attached). The lower portion, about 3ft high, was rotating in an anti-clockwise direction and was of a blue-ish appearance. The upper portion appeared to be stationary, battleship grey in colour with a transparent dome. Protruding out of this dome was something which resembled a broom handle. No figures were visible in the dome. Then Mr Brew stated "It looked like a flying merry-go-round"! "There was a swishing and burbling-type sound."

4. Managing property at Willow Grove for Cr Kilpatrick. Aged about 50-60 years. Has been a farmer all his life and has never served in the forces. Doesn't read books or write very much. Did not ascertain whether he reads comics. Appears to be genuine because story continues to be repeated without any detectable variations. Property is some 1,500 acres and runs only 150 cows of which he milks 80-85 a day. He also stated that he is teetotal and does not suffer any abnormalities to his health.

5. Mr Brew stated that it was raining heavily and continuously with very low cloud and poor visibility. He did not observe any thunder or lighting. The wind was fresh and easterly in direction.

7. On 6th March, Dr Berson and Mr Clarke were interviewed to see if clouds could give this type of phenomenon. They agreed that a tornado condition could give this effect. The direction of rotation of Brew's report was consistent with known facts for the southern hemisphere. The bluish colouring has been reported previously and is probably due to  electric discharge and there would be a smell of ozone. The only difference in Brew's report is that the object moved from East to West because all previous reports to the CSIRO Met Section of this nature have been from West to East. Mr Brew stated that the wind was fresh and from an easterly direction. However, meteorological report states that wind was westerly at 8 knots.

8. Enquiries have revealed that there were no service or civil aircraft authorised to operate in the area at the time.

9. There is little doubt that Brew did witness something and it is most likely that it was a natural phenomenon. The phenomenon was probably a tornado. There was no reported damage along its path, therefore one could assume that it was weak in nature.

Part of the letter from the VFSRS to the Department of Air read:

"We would be obliged if you will advise us of your evaluation on this sighting." The Department of Air response, included:

"2. Our investigations and enquiries reveal that there are scientific records of certain tornado-like meteorological manifestations which have a similar appearance in many ways to whatever was seen by Mr Brew.

3. The information is however, that while we accept this as a possibility, we are unable to come to any firm conclusion as to the nature of the object or manifestation reported."

1. It is interesting to note that I have not been able to locate any completed "Unidentified Aerial Sighting" (UAS) standard RAAF proforma on this case. It appears that non was completed. Perhaps this was due either to the fact the Brew appears to have been semi-literate, or that an interview was conducted and an investigation report prepared instead.

3. The sketch attached to the RAAF report is not signed "Drawn by Mr Brew" or "Drawn by Flt Lt Hudson at the direction of Mr Brew." In fact, we cannot ascertain who drew this sketch, and therefore we do not know how accurately it portrays what Brew saw.

4. The RAAF's conclusion that the observation might be explained as a "tornado-like meteorological manifestation" will be discussed in a latter part of this series of posts on the case.

5. Sunrise that morning was at 0543hrs, some 1 hour and 27 minutes before the time of the event according to Brew.

Part 2 of this series will provide details about the VFSRS investigation.
By Keith Basterfield at January 29, 2015

Introduction Yesterday, I posted a piece about "A Special National Intelligence Estimate" - 1961, which has recently resurfaced...