Why did Edgar Mitchell get a copy of the Wilson/Davis document and why did his estate still have it in 2016?

There has been much mention of late, on social media, about the 2002 notes of an alleged conversation between Dr Eric Davis and Admiral Thomas Wilson. There are several researchers and journalists who are hard at work, looking to determine if the notes are a) genuine, and b) the contents of the document are true. 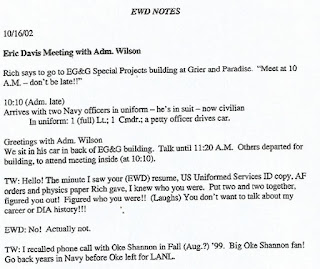 From all the evidence which I have seen, the Wilson/Davis document was found in the estate papers of Dr. Edgar Mitchell, after his passing, and made their way through an unnamed (but known to some) intermediary, to Australian researcher James Rigney; thence to Canadian researcher Grant Cameron, and then mysteriously onto the Internet. The provenance from one end to the other, is now well established.

The purpose of this post is to pose the questions, why did Edgar Mitchell get a copy of the Wilson/Davis notes? Why did they remain in his papers until his death in 2016?

For some background informatiion about the Wilson/Davis document, see my blog post dated 12 June 2019. Part of the post, referenced an article dated 6 August 2008 by US journalist Billy Cox. Cox contacted Wilson and part of the write up mentions Mitchell:

"Mitchell told De Void he never heard directly from Wilson after their initial meeting (1997-KB) but he says he trusts the veracity of the unnamed sources who told him of Wilson's inablity to penetrate security."

The core of the 15 page document boils down to the following extracts:

Page 8: EWD "Who was the project contractor or USG agency that runs program?"

TW "An aerospace technology contractor - one of the top in US."

Page 9: TW "T told I read their program record in the OUSDAT special program record group and wanted to know about their crashed UFO program, what their role in that was, what they had etc."

When Wilson described meeting three personnel from that one contractor:

Page 12: TW "They were a reverse engineering program. Something recovered years ago in the past. Technological hardware was recovered...They had (program manager talking) a craft - an intact craft they believed could fly (space? air? water? dimensions?) Was it from overseas or not? Said NO! Could not be - not possible!!...Program manager said they didn't know where it was from (they had some ideas on this) - it was technology - that was not of this Earth - not made by man - not by human hands. Said they were trying to understand and exploit technology; their program was going on for years and years with very slow progress."'

In summary, the notes says that Wilson states, that he found a US contractor secret program which had an intact, not of this Earth, craft, and were trying to reverse engineer it.

Why specifically would this document, making these claims, be of interest to Edgar Mitchell, which led him to keep the document, which then was found in his estate papers?

What do we know about Mitchell's beliefs about UFOs prior to the 2002 Wilson/Davis notes?

1996. There was an interview on the NBC program "Dateline" dated 19 April 1996, between Dennis Murphy and Edgar Mitchell. Extracts are:

DM: "Do you think it's more likely than not that extraterrestrials have been to this planet?"

EM: "From what I now understand and have experienced and seen the evidence for, I think the evidence is very strong, and large portions of it are classified."

DM "Classified by whom?"

DM "You're saying it it it not only likely happened, but there's been a cover-up?"

EM "Oh - I - I think it has happened the way it seems to be, there's definitely been a cover-up."

DM (Voiceover) Mitchell wouldn't name names but he says some of his information comes from former highly classified US government employees, people who say our government picked up some engineering secrets from UFOs."

1997. From "Forbidden Science: Volume Four" page 368 by Jacques Vallee. Vallee and Mitchell were both on the Science Advisory Board for the National Institute for Discovery Science. On 3 May 1997 Vallee had an opportunity for a private conversation with Mitchell. Vallee's diary records the following:

"In the van I had a chance to discuss various theories with Edgar Mitchell. He thought there was a change in the UFO phenomenon between the early and the late 40's. He believes there is a secret group, a spinoff from the US Government, with access to captured technology. It has reverse-engineered the craft and is busy creating a false threat, to be attributed to "bad aliens," he said, or to satanic forces. But I recall that Ed has been influenced by Steven Greer."

"Yes there have been ET visitations. There have been crashed craft. There has been material and bodies recovered. And there is some group of people somewhere that may or may not be associated with Government at this point...that has this knowledge. They have been attempting to conceal this knowledge or not permit it to be widely disseminated...There has been a certain amount of reverse engineering that has allowed some of these craft, or certain components to be duplicated. And that there are Earthlings who are utilizing some of this equipment in certain ways."

So, we can see that Mitchell's pre-existing beliefs would fit in very nicely with the core of the Wilson/Davis document. That would seem sufficient for Mitchell to have received a copy of the document around 2002 and why it would be found in his estate papers in 2016.


A note of caution

Let us assume now, that the meeting between Davis and Wilson, in 2002, did occur. Furthermore, let us assume that what Wilson said happened, did in fact transpire. What exactly, do we have?

We have evidence that Wilson met some individuals who told him a story about reverse engineering a non-Earthly craft. However, does Wilson say he was shown that craft? No, he does not. Does Wilson have any evidence that such a craft physically exists? No, he does not. Does Wilson have a piece of an unknown fragment, which has been analysed and shown to be extra-terrestrial? No, he does not. We simply have a story, told to a US government official. If it wasn't for Edgar Mitchell, we wouldn't even have that story. But, at the moment it remains, to my mind, simply a story.