More from the US Navy

On 10 September 2019 Greenewald posted the first of the Naval responses.  US Navy spokesperson, Joseph Gradisher, who speaks on behalf of the Deputy Chief of Navy Operations for Information Warfare responded to the following list of questions from Greenewald.

"The 'Unidentified Aerial Phenomena' terminology is used because it provides the basic descriptor for the sightings/observations of unauthorized/unidentified aircraft/objects that have been observed entering/operating in the airspace of various military-controlled training ranges."

(2) On the question of whether or not the Navy had released the three videos?

"The Navy has not released the videos to the general public."

"The Navy has no comment on, nor control over, how civilian individuals or organizations may or may not describe the objects in the referenced videos. The Navy designates the objects contained in these videos as 'unidentified aerial phenomenon.' Adding, "You'd have to contact Mr Elizondo on his description. I can't comment or speculate on how/why he referred to them in that way."

(4) Did the Navy sign off to full, unrestricted public release of the videos?

"Neither the cognizant Navy officers nor DOPSR have record of any correspondence responding to a request for unrestricted release of the subject videos in 2017."

On 11 September 2019, John Greenewald revealed further information about the three videos. In response to his queries spokesperson Joseph Gradisher stated:

(1) What do the three videos represent?

"The Navy has not publicly released characteristics or descriptions, nor released any hypothesis or conclusions, in regard to the objects contained in the referred videos." Then added, "The Navy considers the phenomena contained/depicted in those 3 videos as unidentified."

(2) How does the Navy refer to the videos?

"The Navy's official identifiers for the referenced videos do not match the names referenced (FLIR1, Gimbal and GoFast)...the Navy identifies these videos by the reported dates of the observations/sightings."

(3) What dates were the videos taken?

"We will not be providing any details on individual reports."

On 12 September 2019, on Twitter, Douglas Dean Johnson advised that Gradisher confirmed to him that "Mr Greenewald did indeed quote me accurately in his recent [Sept 10] article." Gradisher also provided Johnson with the following statement:

"The US Navy designates the objects contained in the 3 range-incursion videos that are currently being referred to in various media as unidentified aerial phenomena. The 'Unidentified Aerial Phenomena' terminology is used because it provides the basic descriptor for the sightings/observations of unauthorized/unidentified aircraft/objects entering/operating in the airspace of various military-controlled training ranges - it's any aerial phenomenon that cannot immediately be identified. 'Unidentified Aerial Phenomena' (UAP) is a term we borrowed from the UK. The Navy has not released these videos to the general public; nor authorised public release. The three videos were/are designated as unidentified."

1. It has long been known that the FLIR1 video was taken on the 14 November 2004, the same day as the Fravor tic-tac encounter.

2. Researchers, including myself, utilised the wind speed and direction mentioned by the pilots in the Gimbal video [120 knots from the west] to determine a possible date for that video of 26 January 2015. Upper atmospheric sounding balloon records for the nearest station showed the wind speed as 112 knots from azimuth 245 degrees.

Now that we know that the date was in fact 21 January 2015 we can revisit the wind data. 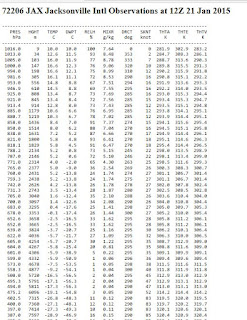 Given that the aircraft, at the time was at a location believed to be off the coast, the wind data are not inconsistent.

3. Note that the US Navy statements says that "The three videos were/are designated as unidentified" and "The Navy considers the phenomena contained/depicted in those 3 videos as unidentified."

Many commentators are stressing the point that the Navy are unable to identify the objects in the videos, i.e. they are UFOs. However, it seems logical to me, that in fact none of the videos would have been release [by whomever] if the Navy had been able to identify them. The very fact that we now can see the videos seems, to me, to indicated the objects are unidentified. The latest Navy statements simply confirm the obvious.

Roger Glassel, in the 16 September 2019 issue of the Swedish magazine UFO -aktuelit  carried the following series of questions and answers

1) Are the updated reporting procedures and congressional briefings being done in relations to the UFO phenomenon or the Unmanned Aircraft System (UAS) problem?

A1) The updated reporting procedures and congressional briefings are in response to reports of incursions by unidentified aerial phenomena in our military training ranges.

As I’ve stated previously in response to news media queries, “There have been a number of reports of unauthorized and/or unidentified aircraft entering various military-controlled training ranges and designated air space in recent years. The Navy and the USAF take these reports very seriously and investigate each and every report. Any incursion into our training ranges by any aircraft, identified or not identified, is problematic from both a safety and security concern. Safety of our aircrews is paramount. Unauthorized and unidentified aircraft pose a risk to flight safety. Additionally, it is vital we maintain security on our operations. Our aviators train as they fight. Any intrusions that may compromise the security of our operations, tactics or procedures is of great concern. As part of this effort, the Navy has updated and is formalizing the process by which reports of any such suspected incursions can be made to the cognizant authorities. Initial revised reporting guidance has been provided to the fleet that details the steps for reporting each incident. More formal guidance is in staffing and will be promulgated fleet-wide when completed. In response to requests for information from Congressional members and staff, Navy officials have provided and will continue to provide briefings by senior Naval Intelligence officials as well as aviators who reported hazards to aviation safety."

2) Is the term Unidentified Aerial Phenomena (in relation to either unidentified aircrafts, or in relations to the UFO phenomenon) used by the Navy or any other component in the U.S. Defense Department?

A2) The Navy designates the objects contained in these videos as unidentified aerial phenomena.

3) Are the Navy involved - or has been involved in the recent decades - in studying the UFO phenomenon?

A3) The Navy has been and is investigating any unauthorized incursions into our training ranges by unidentified aerial phenomena. I would note that the wide proliferation and availability of inexpensive unmanned aerial systems (UAS), such as commercially available quadcopters, has increasingly made airspace de-confliction an issue for our aviators. In this increasingly complex airspace, which includes both military and civilian aviation environments, the U.S. Navy is proactive in exercising due diligence in investigating any observation in training areas that could affect the safety of our aircrews and the security of our operations.

4) Do you think that the quotes by you was depicted in its right context, as presented in the articles?

A4) The quotes provided by you in your email, from the initial Politico story, are accurate.

5) Was the Navy involved in the Advanced Aerospace Threat Identification Program to study Unidentified Aerial Phenomena reported by U.S. Navy pilots or other credible sources?

6) Has any of the unidentified objects in the three videos released now been explained by the Navy or any other component in the U.S. Defense Department?

A6) Neither has the Navy nor any other DoD component has publicly released characterizations, descriptions, hypothesis, or conclusions in regards to the objects contained in the referenced videos.

7) Was the new reporting guidelines updated due to pilots fear of ridicule for reporting sightings of Unidentified Aerial Phenomena and UFOs?

A7) We have updated guidelines and simplified the process to facilitate reporting of unidentified aerial phenomena in order to support an objective, data-driven analysis of the range incursions. By providing updated guidelines and conducting more open discussion of our efforts, we are working to remove any stigmas associated with reporting anything unknown in the airspace. Initial, informal, revised reporting guidance has been provided to the fleet, through message traffic and briefings, with detailed steps for reporting each incident. More formal guidance is in staffing and will be promulgated fleet-wide when completed.

8) Has the Navy, or any other component, come to the conclusion that some of the unidentified sightings reported is due to an aerial phenomena with technological features not currently known to mankind?

A8) The Navy has not publicly released characterizations or descriptions, nor released any hypothesis or conclusions in reference to any reported sightings/observations. As the investigation of UAP sightings is ongoing, we will not discuss individual sighting reports/observations. However, all possible sources of information pertaining to any individual sighting reports/observations are considered in the respective investigations. The information obtained from each individual report of any suspected training range incursion will continue to be investigated in its own right. The information obtained in these reports will be catalogued and analyzed for the purpose of identifying any hazard to our aviators. This process could involve multiple Department of Defense and Intelligence Community organizations. Any report generated as a result of these investigations will, by necessity, include classified information on military operations. Therefore, no release of information to the general public is expected.

9) In the Navy’s effort to study reports of Unidentified Aerial Phenomena, was former DOD/OUSDI employee Luis Elizondo involved in such effort?

A9) While he was a U.S. government employee, Mr. Elizondo occasionally provided coordination and professional connections/liaison within DoD and the Office of the Under Secretary of Defense for Intelligence.

10) What is the definition of Unidentified Aerial Phenomena used by the Navy and the U.S. Defense Department?

A10) “Unidentified Aerial Phenomena (UAP)” is a term we borrowed from the UK – it’s any aerial phenomenon that cannot immediately be identified. The wide proliferation and availability of inexpensive unmanned aerial systems (UAS) isn’t contradictory, it’s just when the UAS is *NOT* immediately identifiable we refer to it as UAP. A quadcopter is immediately identifiable. As we have previously acknowledged, the number of incursions into our ranges has increased with that wide proliferation and availability of inexpensive UAS. Additionally, we use the generic UAP term in communications so as not to pre-judge the results of any investigation.

Any range incursion by unauthorized craft affects the safety of our aviators and/or the security of our operations. Our revised reporting guidance solicits reports of any unauthorized craft (UAP or UAS) observed within our ranges so that we may investigate that range incursion. Incursions/sightings since 2014 may be referred to as either UAS or UAP, depending on the circumstances surrounding the specific incident in question.
By Keith Basterfield at September 14, 2019