Westall - document located which shows there was a HIBAL launch on 5 April 1966.

One non-UAP hypothesis put forward by myself, for the 6 April 1966 Westall incident, was that the object(s) sighted, was/were the payload and parachute of flight 292 of a joint research program, between the US Atomic Energy Commission and the Australian Department of Supply, called HIBAL.

One of the counter-arguments put forward concerning this hypothesis, was that no documentary evidence could be produced to show that flight 292, scheduled for launch on 5 April 1966 from Mildura, Victoria, had even got off the ground. 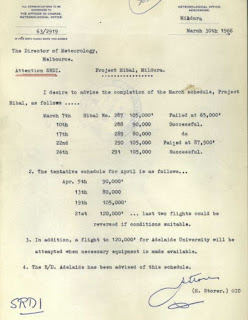 However, I failed to locate any actual launch dates for April 1966. This caused Sydney based researcher Bill Chalker, to write on his Ozfiles blog dated 10 August 2014, 'No documents have been found that even confirm that the scheduled 5 April 1966 launch took place.' 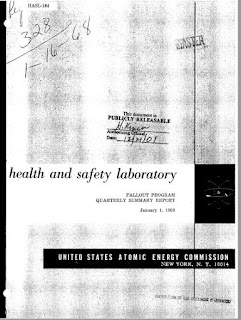 Upon examining the several hundred page document, I came across page 318, which provided a table showing that the April 1966  HIBAL launches had occurred on the 5th, 14th, 19th and 27th. Launches were often rescheduled from proposed dates due to adverse weather conditions. HIBAL flight 292, launched on the 5 April 1966, and reached a height of 27,000 metres (88,600 feet). 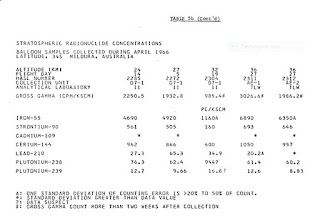 So, I am now able to state, that the proposed HIBAL flight 292, scheduled for launch on 5 April 1966, from Mildura, did launch successfully, the day before the Westall incident.

The question then arises, could a HIBAL balloon, its payload and its 13 metre diameter parachute, which was launched from Mildura on 5 April 1966 still be airborne/close to landing, on 6 April 1966? Normally, a HIBAL flight was only hours in duration.

On the 29 August 1969, there were numerous reports of a 'flying saucer' being seen in Queensland. A RAAF aircraft located the object over Millmerran, (near Brisbane) Queensland, at 6,000 feet altitude. It turned out to be a HIBAL balloon, plus payload, plus parachute, which had been launched from Mildura on 25 August 1969. [Source: NAA file series A703, control symbol 580/1/1 part 12, pages 96 and 99.] Here then, was a three day old 'runaway' HIBAL balloon plus its associated equipment.

In addition, it is known that in August 1966, a HIBAL balloon came down on a chicken farm near Bendigo, Victoria, having travelled at least 70% of the way from Mildura to Melbourne. [Source: Interviews by this author of two members of the actual HIBAL launch crew. 2014.]

So, yes, it is theoretically possible that the flight 292 balloon, payload and parachute, launched on 5 April 1966 from Mildura, Victoria, was carried by the known northerly winds, to Melbourne where it was sighted on the 6 April 1966.

The debate as to whether or not, there was a successful HIBAL launch from Mildura, Victoria, on 5 April 1966 is over. There was such a launch.

It must be clearly stated that no documentary evidence has been located proving that HIBAL flight 292 was near Westall on 6 April 1966. However, there is the suggestion that a HIBAL balloon was seen 40 kms north of Westall on the morning of 6 April 1966, gained from the observation of two individuals who saw a 'flying saucer' trailing a long hose like a vacuum cleaner. [Source: Shane Ryan.] The significance of the trailing long hose, was that HIBAL balloons were filled with gas using a long hose. This hose, attached to the top of the balloon, stayed attached to the balloon throughout its flight. A remarkable coincidence that a 'flying saucer' should have such a hose!

On the other hand, no documentary evidence has been found, to show that HIBAL flight 292 wasn't near Westall on 6 April 1966.
By Keith Basterfield at October 05, 2017