Westall, the Department of Supply and Mr 'X' - a short part two

In a previous post I discussed what we know of a tantilising story from the son and daughter of a high official in the former Australian Department of Supply, in relation to his knowledge of the 6 April 1966 Westall incident.

Over my years of searching government archive material held by such agencies as the National Archives of Australia (NAA) and the National Library of Australia (NLA) I have learnt that these organisations are constantly making new material available. I thought it would be worth my while, spending some time, doing yet another search for any further material on Mr 'X.' This search proved to be very fruitful.

I now have found new material which:

1. Provides his University results from the years 1930-1934, when he attended University in Sydney and completed both a Bachelor's degree in Engineering (1st class honours) and a Bachelor of Science degree (2nd class honours.)

2. Gives a photograph of him in 1935. In order to ascertain whether or not anyone could deduce the identity of Mr X from this photograph, I used a number of web based reverse image sites to check if it is possible to determine the source of this image and thus reveal his identity. I was unable to find Mr X's real name from this image, and this is why I provide the photograph here. If you use "copy image address" you will only get "Capture_Photo_1935.JPG." 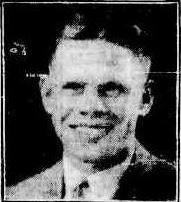 3. Advises that he was appointed as an Engineer in the Postmaster General's Department in 1937.

4. Shows that he moved to the Department of Civil Aviation in 1946, and became a Senior Airways Engineer.

All of this is consistent with the account of his career as conveyed in 2010 by his daughter.

I wish to thank my Sydney research associate, who wishes to remain anonymous, for giving me the idea to look in a particular part of the Australian government archives, where I located this new information.

If, perchance, Mr X's daughter or son reads this, I would appreciate if they would get in direct contact with me at keithbasterfield@yahoo.com.au.
By Keith Basterfield at November 17, 2017

Email ThisBlogThis!Share to TwitterShare to FacebookShare to Pinterest
Labels: Westall