On Thursday, 25 October 1973, at about 1920hrs, two individuals who worked at Navcommsta H E Holt, a US Naval base on Australian soil, sighted an unusual object in the sky. Their story has been detailed in previous blog posts (click here, here, here, here, and here.)

Although the UFO literature states that the two were both US Navy personnel, I now wish to set the record straight. One of those individuals was an Australian civilian, William Gordon Lynn.

William Gordon Lynn was born in Gorrogin, Western Australia on 14 June 1923. His father was John Firth Lynn, and his mother Ethel Maud Lynn.

As recorded in National Archives of Australia file series B883, control symbol WX35596, Bill Lynn, in 1941, at age 18, was a gunner in the 5th Anti Aircraft Battery. He found himself in Darwin, Northern Territory; then by 1944 he was attached to the 2/43rd Battalion, 24th Australian Infantry Brigade. Between 1945 and 1946 he saw action at Madang (New Guinea); Morotai; Biak and British North Borneo. Finally, after the cessation of World War 2, he travelled back home via Rabaul and Sydney.

The 1949, 1954 and 1958 Western Australian electoral rolls show him living in Kenwick, WA, with his trade shown as apprentice boot maker. The rolls also show his mother and father residing at the same address.

Somewhere between 1958 and 1963 Bill changed profession from boot maker to fireman. I located an article and photograph of him on page 7 of the 3 December 1963 "Canberra Times" digitised newspaper, held by the National Library of Australia.The article refers to a Bill Lynn, fireman of Cannington, WA.

In 1967 he obtained a position at Exmouth, WA working as a Fire Safety Officer for the US Navy at Navcommsta H E Holt, North West Cape.

Bill retired from Exmouth in 1983, and went to live in Brisbane, Queensland. 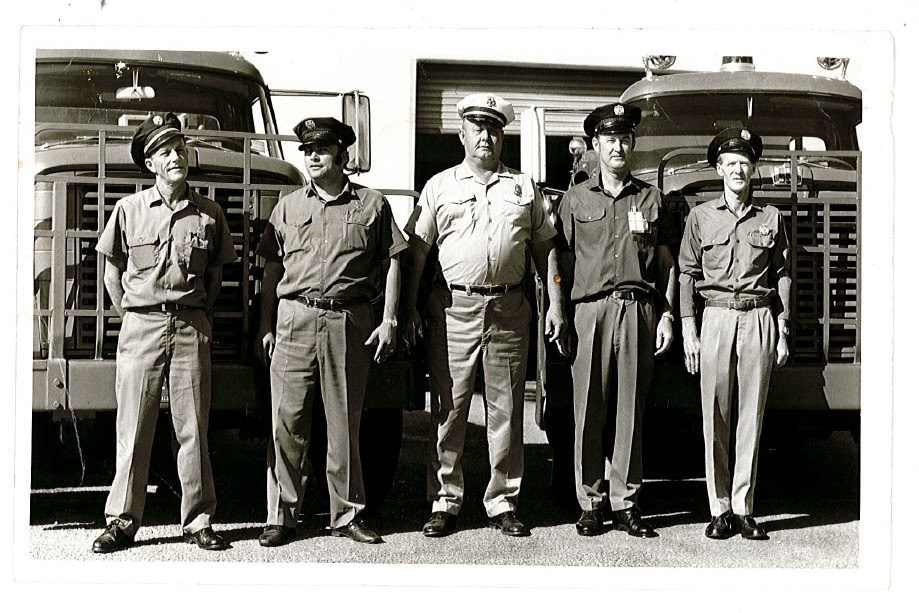 (The above photograph shows Bill Lynn on the extreme left. It was taken at Navcommsta Harold E Holt, North West Cape in about 1975, some two years after the incident.)

Bill Lynn's son, also named Bill Lynn, contacted this author and advised that his father had talked about the 1973 incident to him, on a number of  occasions. He said that his father was adamant about what he saw that day. When Bill (Jnr.) was about 5, (in 1973), his father showed him a sketch of the object. "I was only aged 5 at the time but grew up with my dad's stories of the sighting."

In correspondence with Bill Lynn's daughter Kate, she clearly recalls her time at Exmouth. Regarding the 1973 incident, she writes "I have heard the story told many times. Dad actually recounts how he sat (or leaned) on the bonnet of the pick-up truck and pulled either his notebook or match box out of his pocket, and sketched the UFO and jotted down some rough notes."

"I have a recollection of the sighting being verified, because another sighting was reported at approx. the same time, but from the township itself (Exmouth). We thought it was pretty exciting at the time."

Kate also revealed that her dad "...was fascinated by Astronomy and he would point out all the stars, planets... we often sat on the front step to "spot sputniks"...so I am not surprised that Dad had his eyes on the sky, that night in October 1973."

"One thing I am surprised about in the reports that I have read, is that Dad was thought to be US Navy, and not a civilian...I suppose because he worked on the base, people just presumed."

Kate concluded "...he was a very honest, down-to-earth, hard working, loveable man with a huge heart and a twinkle in his eye!"

Kate supplied the author with scanned copies of some pages from her Dad's notebooks, plus a letter from 1976 which he wrote. Together with a hand written letter by Bill Lynn found on the file in the National archives, there is no doubt that her dad was the Bill Lynn mentioned in the RAAF's documents which refer to the 25 October 1973 incident.

I wish to thank both Kate and Bill (Jnr.) for their assistance in providing details of their father's background, and their recollections of the incident.
By Keith Basterfield at July 11, 2014